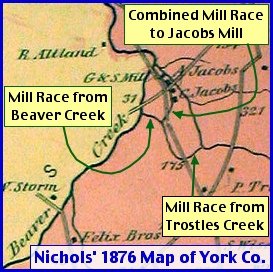 The yellow arrow at the top of the above 1860 map pinpoints Jacobs “Factory” Mill in Paradise Township, York County.  I’ve added the names of the creeks, noted in the article, to help readers’ understanding. Here is a link for post on: The making of Shearer’s 1860 Map of York County, PA.

When comparing the 1860 map to the 1876 map, to the right, one notices additional waterways; that is because, in many instances, Beach Nichols’ 1876 Map of York County included the mill races.  I’ve pointed out the mill races discussed in this article.

In the News-Comet article, through conversations and correspondence with Birdes A. Jacobs, Grant Voaden wrote that S. Morgan Smith delivered his first Turbine Water Wheel to Amos G. Jacobs’ grist mill near East Berlin in 1877.  Jacobs Mill was located about a mile southeast of East Berlin, just inside Paradise Township, York County, near the current crossroads of Jacobs Mill Road and Beaver Creek Road.

From the News-Comet, a newspaper published in East Berlin, PA, issue of January 10, 1947; page 1 & 5 (CONTINUED from Link).  In this article to distinguish between several people with the same name, numerals were used following the name.  The previous installment ended by talking about George Jacobs I, who built the first mill in 1772; while this installment begins by discussing Henry Jacobs I, the father of George Jacobs I.

Henry Jacobs I and other settlers of that time led a rugged life and lived mostly on “corn pone” which they could pound out on a “pioneer mill” consisting of a hollowed out stone.  They made the difficult and sometimes dangerous trip by wagon east to York, Wrightsville and Lancaster county once a year to have some wheat flour ground and get other supplies.  Henry Jacobs I always wore the rim of his hat pinned up in front to get better vision especially when leaning over; he was constantly on the alert for danger or for game.

There were still a few roving bands of Indians around when George I came and for a long time after the mill was built.  Near the mill at a certain post they would often assemble for handouts—the original “Tricks or Treats” gang.  During those times there was a sort of “Colonial Currency”—a transition stage between the English system and that used today.  It was all solid money issued by banks and sometimes even individuals.  A “fibnibit” was the equivalent of 6-1/4 cents and about the size of a dime.  A “levy” was 12-1/2 cents and somewhat larger.  Now the miller would put a cent, about the size of a 50 cent piece, on the post and offer it to the Indians provided they hit it with an arrow from 40 paces.  The Indians would always miss it.  Then the miller would put up a “fibnibit”—that the Indians never missed.  Furthermore, after it was hit the miller could never see where it landed even though standing close—but—the Indian who shot the arrow from 40 paces would run straight to the spot where it fell and pick it right up out of the grass.

But suppose we let Mr. Jacobs tell the story of the mill and of S. Morgan Smith’s first “Success” in his own words.  He has taken the author to all the old mill sites on Beaver creek (see accompanying map) and discussed the history of each, but especially the “Jacobs Factory” Mill.  The following story is in Mr. Jacobs’ own words condensed from six letters to the author, written since October 19, 1946, and many hours of exceedingly interesting conversation.

“Henry Jacobs came to the Beaver Creek April 22, 1749 and took up a grant of about 500 acres.  He first built a log cabin about a half mile west of where the mill later stood.  The original homestead farm property and the mill property have never been owned by anyone outside the Jacobs family.  The farm property is now owned by William C. Jacobs of the Export Department of the A. B. Farquhar Company, York, Pa. and the mill property by Mr. & Mrs. Harry Baughman of Dover, Pa.

“Henry I wishing to retire divided up the land and sold the homestead to his son Philip.  Philip not caring for the farm decided to sell out to his brother George who was married and lived in Berks County, Pa.

“Henry I, the original settler, came here from Bucks County, Pa., Lower Sarecan Township where he was a neighbor of Daniel Boone and Mordecal Lincoln, grandfather of Abraham.

“This George Jacobs I built a large farm house of stone in 1772 which is still standing in good condition.  George I moved here from Berks County at the death of his father Henry I in 1773 having built his house a year earlier, 1772.  He was very energetic and was a man of wealth.  The building of the first Jacobs Mill is wrapped in obscurity.

“My father always thought George I developed the first water power there.  The first wheel was a breast wheel and later the wooden overshot took its place.  Jacobs Mill was located on three creeks.  First a small creek called Trostles Creek, which crosses the Lincoln Highway about one mile west of Farmers or Hogstown which was dammed above the mill.  The second was the Beaver Creek passing at the Eastern Boundary of Abbottstown.  The third passing the Paradise Catholic Church Farm, where on the Lincoln Highway was Noel’s Mill, and on the Church Farm, very early, was Brandt’s Mill.  This site can still be seen along the road near the church.

“It was this Frederick Brandt who willed this mill and farm property to the Catholic Church at his death, before any church building was there.  Services were held in the farm house.

“A dam also was built on the Beaver Creek catching the second and third streams.

“The race from the first stream and dam ran West, and the mill race from the dam catching stream two and three ran East.  These two mill races coming together above the mill into a large weir or storage reservoir.  This storage covered an area of three or four acres.

“The Jacobs Mill had the best water power on the Beaver Creek, and had 13-1/2 Ft. Head.

“The stone mill near East Berlin (Swigart’s Mill), still standing, got the same water, but they had less head and in dry weather there was considerable loss of water along banks, etc.