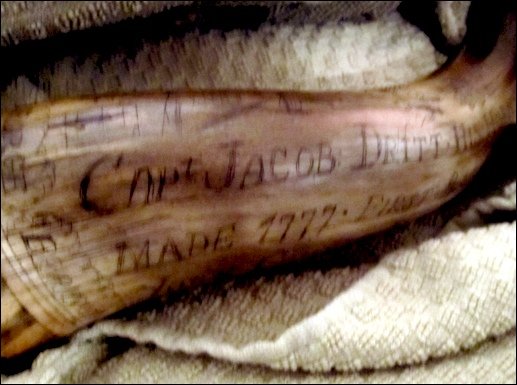 The Dritt Mansion along the Susquehanna River at Long Level was the site of a lecture on the story behind the Revolutionary War powder horn of Captain Jacob Dritt. Last week’s lecture was part of the Second Wednesday Heritage Lecture Series at The Zimmerman Center for Heritage; a mansion once owned by Jacob Dritt, immediately following our War for Independence.

I like to attend at least one of those lectures a year. The lectures in March and April are: “The Susquehanna’s Native Landscape—Visions of the Past Remain” by National Park Service cultural anthropologist Cindy Chance and “Building the Dritt Mansion” by Paul Nevin. Details and registration for the $10 lectures are at this link.

The Zimmerman Center was established as the very first visitor contact station on the whole Captain John Smith Chesapeake National Historic Trail. It was a natural site for the first Visitor Center, because of the range of stories that can be shared at that location. Out the front door, stories of the Susquehanna River can be shared. Out the back door, with its immediate proximity to the Native Lands County Park, stories of the Susquehannock Indians can be shared; i.e. the Native American tribe that Captain John Smith spent substantial time writing about. Captain John Smith prominently displayed a drawing of a Susquehannock Indian on his map from exploring the Chesapeake and its rivers.

The lecture on the Powder Horn’s Story was presented by Dr. Christian Keller, professor of history in the Department of National Security and Strategy at the U. S. Army War College in Carlisle. Dr. Keller is a direct descendent of a brother of Jacob Dritt and shared the story of how the power horn came into his possession.

However the “flying camp” was pressed into service manning Fort Lee and Fort Washington, which were intended to prevent British ships from sailing up the Hudson River. From a river standpoint, the forts were well positioned; very high on hills over-looking the Hudson River and old ships were sunk between them, to create additional obstacles; as shown in Dr. Keller’s drawing.

Since the forts were virtually on bare rock, earthworks to defend the forts from ground attack were not good. The British attacked Fort Washington via ground from the north, east and south on November 16, 1776. Capt. Jacob Dritt was in the north defenses; which inflicted the most British causalities during the three-prong attack. Nevertheless, Fort Washington fell the same day, resulting in the surrender of 2838 Americans.

Thus in Captain Dritt’s first day of his first battle, he is a prisoner of war. Since he is an officer, he was spared the fate of the deadly British prison ships anchored in New York harbor. Captain Jacob Dritt is at liberty, residing as a prisoner of war in the village of New Ultecht on Long Island. In 1778 Captain Dritt is released, when he is involved in an officer exchange.

The powder horn clearly has inscribed “Made 1777,” which was during the time Captain Jacob Dritt is a prisoner of war. The power horn also has Battle of Brandywine, Valley Forge, and Battle of Yorktown inscribed. As a prisoner, Captain Dritt could not have participated in the September 1777 Battle of Brandywine, and his being at Valley Forge is very doubtful. The Battle of Yorktown is a possibility for Dritt, if he was part of the German Regiment, where incomplete records exist.

Jacob Dritt is shown in this circa 1870 cabinet card photo of a Lewis Miller drawing when Jacob served as a Major General in the Pennsylvania Militia; about 1800.