In 1825, John Elgar designed and built the Iron Steamboat Codorus in York, Pa. At that time, the majority attitude was, “wood floated and iron sank, why would anybody build a boat out of iron?”

On November 22, 1825, The Codorus was launched in the Susquehanna River at Accomac, Hellam Township. She did not sink! Instead she operated flawlessly; traveling at a respectable six miles per hour against the current. The first iron steamboat in America went into the history books, owing to the vision of Yorker John Elgar.

This venture began in 1824, with a group of Baltimore businessmen wanting to test the practicality of running steamboats the length of the Susquehanna River. The businessmen, many of whom were already associated with the Merchant Flouring Mills at York Haven in York County, advertised in Baltimore papers requesting proposals for a steamboat capable of navigating the erratic nature of the Susquehanna River.

John Elgar’s solution was to use an iron hull; a first in America. While he successfully captained The Codorus up the Susquehanna River into New York State during 1826, it was the erratic nature of the rocky Susquehanna River that ultimately did not permit establishment of commercial steamboat operations over the length of the river.

What happened to The Codorus? It sat idle for much of the time near York Haven, before the Baltimore businessmen brought it down the Susquehanna River and put it up for sale.

The Scientific American Supplement No. 1555, in the issue of October 21, 1905, contained an extensive article entitled “Iron and Steel Hull Steam Vessels of the United States,” by J. H. Murrison, Author of “History of American Steam Navigation.” A paragraph, on page 24919, under the “Experimental Period” describes the fate of the Iron Steamboat Codorus that was built in York, Pa.

The boat remained on the Susquehanna River for about two years without any permanent employment, was then taken to Baltimore, Md., and the last record left of the vessel appears that in January, 1829, she was sent to North Carolina to run between New-Berne and Beaufort. A Baltimore paper in April, 1830, published under the heading of “The First Iron Steamboat”; “We have two or three times during the past year endeavored to set history right in regard to the place at which the first iron steamboat was built in America. The steamboat ‘Codorus’ was the first iron steamboat built in the United States, as has been repeatedly stated in this and other papers. . . . It was built at York, the hull altogether of iron. . . . The ‘Codorus’ was afterward brought to this city, where after remaining some time was taken farther south to ply on some small river.” The iron was of domestic manufacture.

The draw, i.e. the depth the iron steamboat would sit in water, had to be kept shallow, due to the many shallow areas; particularly in the upper branches of the Susquehanna River. A six-inch draw was fine for the Susquehanna River, however totally unsuitable to travel any distance on the Atlantic Ocean.

Luckily a Dismal Swamp Canal connection had recently opened further south into North Carolina, such that The Codorus did not have to venture out into the ocean on her voyage to New-Berne. The route of this voyage, which began in mid-December 1828, is depicted by the blue line I’ve drawn on the following 1867 Map of the North Carolina area south of the Dismal Swamp Canal.

The route of the ‘late 1828-early 1829’ voyage of the Iron Steamboat Codorus traversed the following. South on the Chesapeake Bay to Hampton Roads, then past Norfolk, Va. on the Elizabeth River to the Dismal Swamp Canal; crossing through Virginia and continuing into North Carolina. The Canal becomes the Pasquatank River, flowing into Albemarle Sound and continuing south into Pamlico Sound, both on the west side of the North Carolina barrier islands. Steaming up the Neuse River to the confluence of the Trent River where the town of New Bern is located.

Continue reading for several New Bern newspaper articles and an illustration showing the transformation of The Codorus into a ferry boat.

The Saturday January 24, 1829, issue of the Newbern Sentinel of Newbern, North Carolina, reported:

We hail with pleasure the arrival of the long expected steamboat the Codorus. She arrived on Tuesday last, and will shortly take her place, as a regular packet between Newbern and Beaufort. It is expected that she will be enabled to make three trips per week. Much credit is due to the enterprising proprietors, Messrs. Swan and others, for the undertaking—and we hope that public patronage will reimburse them abundantly. The Neuse is peculiarly adapted to steamboat navigation. The increased facilities of communication will, doubtless, much increase both traveling and business. 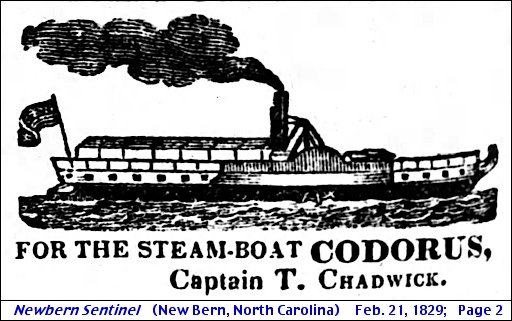 The February 21, 1829, issue of the Newbern Sentinel contained this illustration of the iron-hull of the Steamboat Codorus fitted with new decking. The issue also contained the Regulations and Rates. The passage from Newbern to Beaufort or Beaufort to Newbern cost $1.50; this was a distance of 35 miles via the newly opened Clubfoot and Harlow’s Creek Canal. Passage for children under 12 years old and Servants cost $0.75 and each passenger was allowed one Trunk without extra charge. Freight per barrel, between Newbern and Beaufort cost $0.40, with C. V. Swan the agent in Newbern and B. L. Perry the agent in Beaufort.

The route of the Steamboat Codorus, between Newbern and Beaufort, is depicted by the blue line I’ve drawn on the following detail from the 1867 Map of the North Carolina area south of the Dismal Swamp Canal.

The April 22, 1950 issue of The Gastonia Gazette, of Gastonia, North Carolina, contained an article about the 125th anniversary of the construction of the Codorus; the first metal hull vessel built in America. It raised the question “What happened to the Codorus?”

Actually the Codorus was not as large as any number of wooden hull fishing vessels which base in the Morehead City area today [with the coming of the railroad; Morehead City was established just west of Beaufort]—but she was the first iron ship and about the only reminder of the vessel today is a Pennsylvania highway marker which carries the following inscription: “America’s first iron steamboat—The Codorus, built in York by John Elgar, was launched at present day Accomac, on the Susquehanna River, on November 22, 1825. The site is about two miles distant.”

She had been named for a creek that runs through York. Iron used in her construction cost $140 per ton. Following her launching she was powered by a Davis engine of eight horsepower. During the next three years she operated on Pennsylvania rivers but in 1828 the Codorus was towed down the Susquehanna and up to Baltimore.

In Baltimore, she was purchased for $650 by some North Carolina promoter who planned to connect New Bern and Beaufort via the newly opened Clubfoot and Harlow’s Creek Canal. In those days the site where Morehead City was to be was only a point of marshland known as Sheppard’s Point.

On her passage south, America’s first iron steamboat was fortunate to arrive in Norfolk on the very day the Dismal Swamp Canal was reopened after extensive enlargement. This meant the Codorus could continue her voyage via the North Carolina sounds, through inland waters and would not have to brave the Atlantic and pass dreaded Cape Hatteras.

On February 7, 1829, she was advertised in a New Bern paper as ready to enter service. Her operation must not have been very successful because the following year she was advertised for sale. At this point, the curtain closed and the subsequent fate of America’s first iron vessel may forever remain in obscurity. On the other hand some coastal old timer or student of maritime history may read this and give some data about what happened to the Codorus.

Thus ended the story of the Codorus, a ship that was to change the maritime scheme of things. It was the beginning of the end for “wooden ships and iron men.”