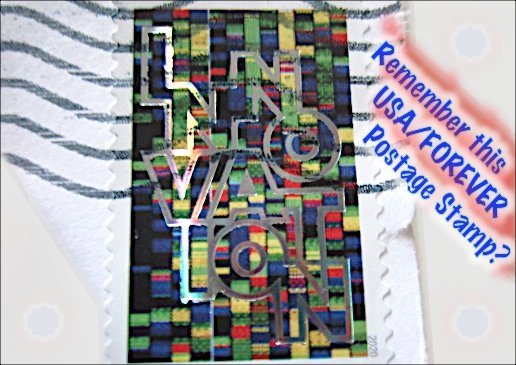 An envelope from Beverly Scavone was affixed with an unusual postage stamp. The next day an envelope from Joyce Evans contained an identical stamp. Intrigued by the design; it was the first I had seen this stamp, containing sequences of random letters, which appeared to fade in and out, depending on how the light hits the stamp.

The following is a photo of the stamp, with the light hitting it in a manner, such that all the letters are clearly visible. I learned the Genome Sequencing United States postage stamp was issued only 7-months ago, on August 20, 2020.

In her letter, Joyce submitted some additional details about East Prospect; which will appear in a future post. That post will require some research, however I became even more intrigued with the stamp, owing to a P.S. that Joyce added to her letter:

“You should save the stamp. The stamp was issued less than a year ago, however it is already highly collectable. These stamps are already being offered on the open market, between double and triple their 55-cent purchase price.”

My first reaction to the letters on the stamp, was that they appeared to be lined up diagonally; i.e. LN V/A IO N NOT, which did not make sense. Going across I came up with: LNNO V/AT ION. Until finally deciding the lettering was a cryptic: INNOVATION.

When this stamp was researched on the Internet, I discovered it was from a series of five stamps, all with the same cryptic INNOVATION lettering over different background photos, representing: computing, biomedicine, genome sequencing, robotics and solar technology.

The visual effect of the cryptic INNOVATION lettering was achieved by overlaying the outline of those letters onto each stamp with chrome foil. That was a relatively new printing technology used by the United States Postal Service for postage stamps.

In 2019 chrome foil had been applied to forever postage stamps recognizing the 50th anniversary of the 1969 first moon landing. In that case, the chrome foil was printed upon to enhance the mirrored effect on the space suit helmet visor.

That stamp utilized a NASA image snapped by mission commander Neal Armstrong of lunar module pilot Buzz Aldrin, while both men were standing on the moon; shortly after Armstrong’s first step on the moon at 10:56 PM Eastern Time on July 20th. In the reflective gold coating of the visor of Aldrin’s helmet, it is possible to see Aldrin’s long shadow, as well as Armstrong standing near the lunar landing module Eagle.

In 2014 I used stamps from my 1950s through 1960s postage stamp collection to illustrate a Historical Chart of the U. S. First Class Postage Rate. I titled the chart in that post: “Between 4¢ & 6¢ Stamps, Put a Man on the Moon.”

The last first class postage rate increase went into effect on January 27, 2019; increasing the cost to 55-cents. That increase was added to the chart; it fell right between the two future trend lines, which were projected on the original 2014 chart.

Between 4¢ & 6¢ Stamps, Put a Man on the Moon; Buy your Forever Stamps