Second Saturdays is a free lecture program offered by the York County Heritage Trust, providing an entertaining yet educational Saturday morning for the community.  The lectures are held the second Saturday of each month and begin at 10:30 a.m. at a featured Trust site.

The November 9th, 2013, program will be held at the Agricultural & Industrial Museum.  Free parking is available in the lot directly across the street from the museum entrance at 217 West Princess Street in York, Pennsylvania.

The speaker is Stephen H. Smith, a design engineer who worked at York International Corporation for 33 years.  He retired several years ago to research and write books full time; his second career.  Last year he used his knowledge of local history to start this blog; YorksPast. 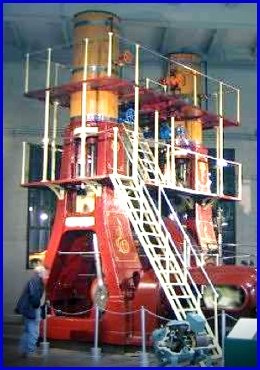 In the talk, I will discuss the early history of the York Manufacturing Company, established along Penn Street in York during 1874.  Learn how this maker of washing machines and water wheels grew to become the driving force behind the development of artificial ice as York Ice Machinery Corporation.  From there the company went on to pioneer some of the first air conditioning systems, leading to world recognition of the YORK name for air conditioning and refrigeration.

After the program a museum guide will provide a demonstration of a York Manufacturing Company A-Frame Ammonia Compressor on display at the museum.  This is a HUGE compressor; look closely at the photo, you’ll see a man standing at the lower left.  York International Corporation donated the compressor to the York County Heritage Trust in 2000 and provided $100,000 to restore it.

York Manufacturing Company built this compressor in 1904, at their plant along Roosevelt Avenue.  This A-Frame Ammonia Compressor operated for over 70 years at Cudahy Packing Company in Wichita, Kansas.  The compressor was part of a system that produced ice and refrigeration to preserve meat products; it operated into the 1970s, when it was retired from service.  The unit, 15-1/2 feet wide, 26-1/2 feet long and 25 feet high, weighs 72.5 tons.  A small electric motor is used to mechanically move the massive parts during the demonstration.

An index of links to related YorksPast Blog posts follow: