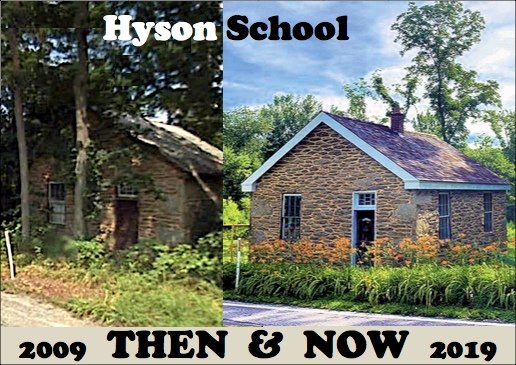 Myrna Hyson Ross is responsible for funding the entire endeavor to restore the original stone 1857 Hyson One-Room Schoolhouse along Round Hill Church Road in East Hopewell Township. The Stewartstown Area Historical Society provided guidance in the six-year effort, which transformed a failing structure, surrounded by woods threatening to claim the building, into a place where future generations can experience a unique 19th Century one-room schoolhouse; in which one teacher taught eight grades, all in one room.

A major part of the restoration was rebuilding a collapsing north wall; utilizing all original stones & large corner stones, know as quoins; with mortar sand from the adjacent stream. During the renovation, a dendrochronological investigation of the wood in the schoolhouse revealed felling dates of: Spring 1856, Spring 1857, and Summer 1857; indicating the original structure was built in the summer of 1857 or shortly thereafter.

Dendrochronology is the science of dating wood utilizing yearly variations in tree-ring growth. The tree-ring dating of the Hyson Schoolhouse was conducted by Oxford Tree-Ring Laboratory.

Recently, Doug Winemiller extended another invitation to see the Hyson Schoolhouse restoration, since I had conflicts during the Preview and the Open House last fall. Myrna Hyson Ross, also stopped by; I hope I have as much energy when I’m 95-years-old.

Myrna explained how she became the owner of the schoolhouse. The land for the original stone Hyson Schoolhouse was from the farm of her Great-Grandfather Robert R. Hyson, who lived just up the road; at the southwest corner of Hyson School Road and Round Hill Church Road.

Robert R. Hyson [born 1826 – died 1903] acquired the original stone 1857 Hyson Schoolhouse after the new frame Hyson Schoolhouse was built across the road in 1892. Robert left the 1857 schoolhouse to his unmarried daughter Laura Hyson; who is Myrna’s Great Aunt.

Laura Hyson [1864-1951] attended the original Hyson Schoolhouse; she left the schoolhouse to the siblings: Clyde, Alvin, Myrna and Roy Hyson. Myrna Hyson married Cecil Ross in 1967; he was from Staten Island, and they resided in that vicinity. Myrna’s brothers thought she should have full ownership of some land in Pennsylvania, so they all decided to sign over, to Myrna, their rights to the Hyson Schoolhouse, which sat on 2.5-acres of land.

After Myrna’s husband died, she decided to move back to York County; whereupon her quest to restore the Hyson Schoolhouse commenced. Myrna Hyson Ross is to be applauded for her efforts in preserving a piece of not only early education history in York County, but also a unique piece of Hyson family history.

Within the final years the stone 1857 Hyson Schoolhouse was utilized for educational purposes, the students were treated with new desks; as reported in the December 12, 1888 issue of The York Daily: “The school directors of East Hopewell Township have removed the old, narrow-seated, straight-backed, pine desks from Hyson’s and Round Hill school houses, and have replaced them with patent desks, which, over the old pine desks, are a vast improvement in comfort, convenience, structure and appearance.” These 27-students, attending the original stone 1857 Hyson Schoolhouse in 1890, would have benefited from those newer desks.

Part of the new frame-built 1892 Hyson Schoolhouse, on the west side of Round Hill Church Road is seen at the left edge the following photo showing the south side and east end of the resorted 1857 Hyson Schoolhouse. The tree stumps around the original schoolhouse were not pulled, so as not to damage the stonewalls of the building; since the walls have no footers, simply being built on compacted soil.

Myrna is planning some additional work in preserving the windows of the 1857 schoolhouse, due to a lot of traffic in the area. Full details of the entire restoration effort are on the Stewartstown Area Historical Society web site.

Myrna attended the frame 1892 Hyson One-Room Schoolhouse, shown here on the west side of Round Hill Church Road. That schoolhouse has the year 1892, marked on a foundation stone. The schoolhouse has since been repurposed as a residence, featuring an addition to rear.

The following 1908 Topographic Map focuses on the “Hysonville” section of East Hopewell Township. “Hysonville” is only a local nickname, because of all the Hyson residents and Hyson features in that area during the late 1800s and early 1900s. However this area did have a short-lived official Post Office, called WILBEN, situated at Hyson’s Mill; more on that later.

I’ve pointed out the locations of the 1892 (Frame) and 1857 (Stone) Hyson One-Room Schoolhouses along Round Hill Church Road. A “+” attached to the building symbol, in this manner, indicates it is an active school on the 1908 Topographic Map.

John Hyson had the largest family; all 14 of his children attended the original 1857 Hyson Schoolhouse. One of them also taught at that schoolhouse; she was Sallie Miller Hyson Brenneman. A relative donated the clock, which hung in the schoolhouse when she taught at Hyson’s during the late 1870s. The old clock still works.

Archibald Hyson [1824-1916] was a renowned builder in the southern part of York County. Doug Winemiller recalled Archibald’s log/workbook states he built a school in 1857, so Archibald Hyson may have constructed the original 1857 Hyson Schoolhouse. Archibald Hyson built Hyson Mill on his farm in 1854; per Volume II of George Prowell’s 1907 History of York County, page 230. Although the following 1950 newspaper caption notes the mill was built in 1850. When such date conflicts occur, I tend to believe the date in the source published closest to when the event occurred.

The following photo of Hyson Mill appeared in The Gazette and Daily of April 28, 1950; with the caption: HYSON’S MILL IN EAST HOPEWELL TOWNSHIP, 1890—This picture of the mill owned by the late Archie Hyson, located in East Hopewell Township, near Cross Roads, was taken in 1890. Hyson built the mill in 1850. The persons included in the picture from left to right are: John Keesey, W.U.G. Montgomery, Ben Hyson, John Glessick, J.R.W. Keesey, Archie Hyson, the mill’s owner; John McClain (on the white horse), Jacob, Walter, Lemon and Webster Keesey and Mrs. J.R.W. Keesey. W.U.G. Montgomery and Walter Keesey are the only members of this group living today [i.e. during 1950].” Today, only the tall mill house remains standing.

WILBEN was a United States Post Office in East Hopewell Township between May 18, 1898 and November 29, 1902. Those details are per the Gazetteer of York and Adams Counties, Special Publication No. 63, from the South Central Pennsylvania Genealogical Society, page 76.

I discovered the Wilben Post Office was located at Hyson Mill. The Gazette and Daily published an August 9, 1948, article on William U. G. Montgomery, who had spent 61 years in the milling business. “He started in the business at the age 17 as an apprentice at the Archibald Hyson Mill.” He worked at other mills, however for 11 years, he rented and operated the Hyson Mill. “While operating the Hyson Mill, Montgomery said he was instrumental in having a Post Office located at the mill. The name of the Post Office was WILBEN, which Montgomery devised by combining the first three letters of the his first name with the three letters of the name of his associate, Ben Hyson.” That would be a good trivia question.