Cars fueled by water sold in York a Century ago 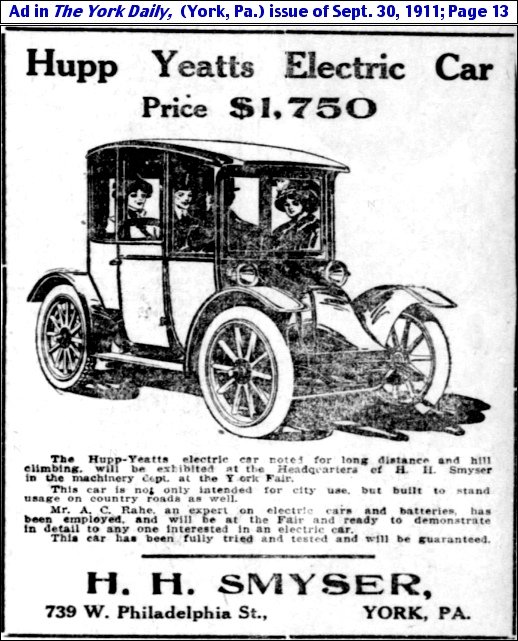 Bob Smyser shared the story that Howard Smyser sold electric cars in York by boasting, “The cars are fueled by Susquehanna River water.” Meaning, the waters of the Susquehanna produce electricity, via the York Haven Hydroelectric Power Plant, which charge the car batteries, allowing for 75 to 90 miles of vehicle travel per charge in 1911.

Bob also shared Smyser family stories about Howard Smyser branching out into yet another business direction; automobile dealerships, where his first vehicles sold were electric cars and his last vehicles sold were Reo trucks. I confirmed the electric car dealership story via this ad I found in the September 30, 1911 issue of The York Daily. Click on this LINK for a Full View of the illustration in this post if details are cut off in the cropping of illustration.

The tiny text in the ad might be a little difficult to read; so here is the text at the bottom of the ad: “The Hupp-Yeatts electric car noted for long distance and hill climbing, will be exhibited at the Headquarters of H. H. Smyser in the machinery dept. at the York Fair. This car is not only intended for city use, but built to stand usage on country roads as well. Mr. A. C. Rahe, an expert on electric cars and batteries, has been employed, and will be at the Fair and ready to demonstrate in detail to any one interested in an electric car. This car has been fully tried and tested and will be guaranteed. H. H. SMYSER, 739 W. Philadelphia St., York, PA.”

Bob Smyser supplied the story about how Howard Smyser got into the business of selling electric cars: “Howard Smyser was on a grain-buying trip to the mid-west. By chance Howard met Robert Hupp on that train trip west. Through their conversation, Smyser learned that Hupp was getting ready to start producing electric cars. Howard was impressed with Hupp. Smyser immediately inquired about selling the cars. Robert Hupp promised him a dealership. Before Robert got into electric cars, this is the same Hupp that created the car known as the Hupmobile.”

The history of Robert Hupp is interesting; he worked a few years at both Olds Motors and Ford Motor Company before going into business with his brother Louis Hupp. Finding investors, they formed the Hupp Motor Car Company in Detroit. Their first creation, the gasoline engine powered Hupmobile debuted in 1909, which sold 1,500 that first year. In 1910, production exceeded 5,000.

During the second year, a major disagreement with the company investors developed, which resulted in Robert and Louis Hupp selling all their stock in the Hupp Motor Car Company. The investors obtained a court order preventing Robert and Louis from using the Hupp name on any new gasoline engine powered automobiles. Which is why, starting in 1911, Robert Hupp focused on producing electric cars. All the while, the Hupp Motor Car Company continued to operate for many more years; producing gasoline engine powered Hupmobiles, less its founders.

Hupp-Yeats electric cars were produced in Detroit. They became one of the more successful electric cars on the market. These cars utilized the newer Exide Hycap batteries, produced in Philadelphia; which may explain how Howard Smyser had a chance meeting with Robert Hupp; i.e. when Hupp was traveling back to Detroit from Philadelphia. Of course the chance meeting could have also happened when Hupp was traveling back to Detroit from Pittsburgh; because the Westinghouse plant, in Pittsburgh, produced all the electric motors used in the Hupp-Yeats cars.

Click on this link, Where to buy a gasoline engine powered Hupmobile in York. It provides a photo quiz, of several old time cars: Hupmobile, Marmon, LaSalle, Erskine, Oakland and Pierce-Arrow; plus a listing of where to buy them in York.