I was pretty sure Huntleys appeared in the ads within my Central York High School yearbook; the 1968 Panther. It was a text ad, providing their address; 190 Memory Lane. A photo of Huntleys Drive-In appeared within the ads of the 1970 Panther, on page 279. I added color, because I thought Huntleys needed its classic red tile roof.

The photo of the sign in front of the drive-in comes from a collection of several old Police Polaroids donated to the Springettsbury Township Historic Preservation Committee. Each Polaroid in that collection contains the date and time taken; this one was taken November 11, 1966 at 11:10 a.m. At that time, evidence was being recorded in the area and I was able to zoom in on this sign image. Another photo, from a different location appears later in this post.

The Memory Lane Huntleys Drive-In opened in November of 1966 and closed in May of 1971. Sue Markle provided locations of other Huntleys and details on how this hamburger drive-in chain got started. Her information provided clues that also allowed me to dig a little deeper in my research.

I occasionally looked into the extent of the Huntleys Hamburgers chain and am indebted to Sue Markle for her comments, because previous attempts at researching Huntleys never turned up many details. In the early 70s, my East End hamburger pecking order was Gino’s first, Huntleys occasionally, and McDonalds almost never; as a result Huntleys research previously was given low priority. Here are Sue Markle’s full comments.

Enjoyed your post on Gino’s. How about looking at Huntley’s—the often-overlooked East End hamburger joint along Memory Lane. It opened around 1967 and was in business about five years. When McDonald’s arrived nearly next door during Huntley’s final year, my hamburger pecking order remained Huntley’s first, Gino’s occasionally, and McDonald’s almost never. I wonder what your readers East End hamburger pecking order was during the early-seventies.

I have to confess somewhat of a connection to Huntley’s. My grandparents owned a farm in Berks County, with a continuing contract to sell their cattle to a large meat packing company (Pikeus?) in Philadelphia. Pikeus was an early regional wholesale hamburger supplier to the likes of Gino’s and McDonald’s, plus on occasions, even York County’s Bury’s.

According to the story I always heard from my grandfather, Pikeus suddenly lost all wholesale business to hamburger joints in the mid-sixties when several Chicago meat packers ganged up and, in round robin style, repeatedly undercut his prices. Huntley’s Hamburger joints were born when Pikeus opted to get out of the wholesale meat packing business and sell directly to consumers. Huntley’s niche was Pennsylvania Dutch style hamburgers using solely Pennsylvania beef from many of his former suppliers, including from my grandparents’ farm, hence my personal interest.

Our family ate mostly at York’s Huntley’s along Memory Lane, however also ate at Lancaster’s Huntley’s along Oregon Pike. I understand Huntley’s had expanded, or was expanding, into Dauphin, Lebanon and Chester Counties when they suddenly went out of business. I never ate at those new locations—if they were built, where were they located?

I do remember localized hamburger price wars occasionally breaking out between Huntley’s and the nearby McDonald’s. The story my grandfather often told about Huntley’s demise involved some sort of meddling by McDonald’s with Huntley’s suppliers. Have you every heard anything about this?

I wanted to know which was first; the York or Lancaster Huntleys. In a deed search for the lot along Memory Lane I got me answer. “Huntleys, Inc. No. 2” purchased the lot at 190 Memory Lane on June 9, 1966; per York County Deed Book 59I, page 788. The Lancaster Huntleys at 1529 Oregon Pike was built first in 1965; with the Huntleys Hamburgers fictitious name filing on 1/28/1965.

The York and Lancaster newspaper hiring notices often have a Mr. Pincus showing up as the person to call. Sue Markle confirmed that was the name she was trying to remember; i.e. not Pikeus. The meat packing business referenced by Sue is believed to be Albert A. Pincus & Sons Meat Packing Company; operating at Sixth and Callowhill Streets in Philadelphia. The father, Albert, started the business in 1946 and turned it over to one of his sons, Bud, who closed the business in 1968. The founder(s) of Huntleys are likely one, or more, of sons of Albert Pincus.

I did not discover any details on additional Huntleys in Dauphin, Lebanon or Chester Counties. Maybe locations 3, 4 and 5 were still in the planning stage and had not become public prior to the May 1971 bankruptcy filing closing the York and Lancaster Huntleys; as reported in The Philadelphia Inquirer of May 23, 1971.

The following photo, dated November 9, 1966, gives a perspective of the location of Huntleys along Memory Lane. It is an eastward looking view showing Huntleys Hamburgers at the right and New Eastern Market at the left; both along Memory Lane.

In fall of 1970, McDonalds opened on the southwest corner of Memory Lane and Industrial Highway; i.e. one building lot on either side of Wallace Street, separated Huntleys and McDonalds along Memory Lane. I am not aware of any hamburger price wars between the two, however from the fall of 1970 to the spring of 1971; I was attending Penn State at University Park. Maybe one of my readers has memories to share. 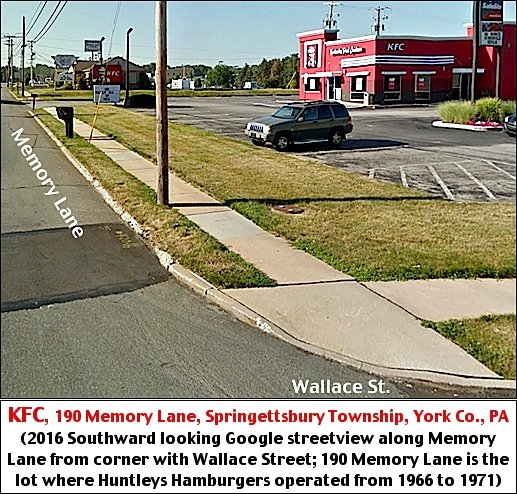 Lets reflect and compare two 60s hamburger drive-ins in Springettsbury Township; Huntleys on Memory Lane and Gino’s on Market Street, with Gino’s also having the exclusive area franchise for Kentucky Fried Chicken. Neither hamburger business survives at these locations, however KFC, initially offered at the hamburger drive-in on Market Street, is now offered in its own restaurant at the former location of the hamburger drive-in on Memory Lane. Two hamburger establishment losses with one chicken establishment left standing reminds one of the Chick-fil-A ads of today, with a cow wearing a sign urging everyone to “Eat Mor Chikin;” seems to be happening.