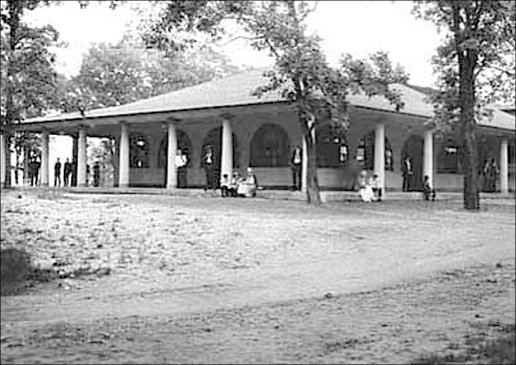 In a conversation this week with Ray Kinard, we were sharing Rail Trail items; when Ray mentioned a long ago park near Howard Tunnel. After the call, I returned to working on an article for the Journal of York County Heritage. However my mind persisted in pondering the tunnel park, such that I was suddenly sidetracked discovering tales of that park near Howard Tunnel.

In the days before electric trolleys and one-day excursions to trolley parks, such as Cold Springs or Brookside, steam trains carried passengers to rural destination picnic grounds along railroads. Two notable picnic grounds in York County were Tunnel Grounds, established by the Northern Central Railway in 1872 and Springwood, established by the Peach Bottom Railway, later known as the Maryland and Pennsylvania Railroad, in 1874.

The Tunnel Grounds were so named due to their close proximity to Howard Tunnel. That still active railroad tunnel was completed in 1838 and today is a notable feature in the Heritage Rail Trail County Park; and located on the Rail Trail about 3-miles north of Seven Valleys. The picnic grounds near the tunnel, were known as the tunnel picnic grounds; however often simply the Tunnel Grounds.

The York Daily of June 20, 1872 documents the origins of: “Grand Picnic Grounds.—The Northern Central Railway Company are just finishing up their elegant picnic grounds near the tunnel, south of York. A large building forty by eighty feet which answers for many purposes; it has a solid floor all through, and is well calculated for large dancing parties. Swings have been put up, large and strong enough for six persons, a fine well of water is on the ground; a [rail siding] switch has been laid in along side of which is a platform, and in short, it has all the possible convenience that a picnic ground can have.”

As established in 1872, Tunnel Grounds functioned as a place for organized groups to hold picnics. These groups were predominately fire companies and Sunday schools, however other civic organizations held picnics on the grounds. Examples of the various types of picnics, during the earliest years of Tunnel Grounds, follow. Also note this picnic grounds saw weekday and weekend use.

Between four and five hundred persons were on the Tunnel picnic grounds on Thursday July 18, 1872, for a Sunday School picnic sponsored by Duke Street M. E. Church. The crowd was transported to and from Tunnel Grounds by a special train.

On Saturday August 3, 1872, the York Council No. 243, Order of United American Mechanics held a picnic at the Tunnel Grounds. The junior Codorus Council No. 115, Jr. O. U. A. M., with their lady friends were also invited. Trains departing York at: 7:20 A.M., 12:20 P.M. and 3:37 P.M. made a stop at the Tunnel Grounds. A 6:00 P.M. special train returned all guests from the grounds to York in the evening. The Worth Infantry Band was on hand all day providing the music; they also heading the procession to and from the train stop at Tunnel Grounds. Attendance was reported between three and four hundred.

An outdoor dance platform was erected at Tunnel Grounds during the 1873 summer season. A few of the Sunday schools using the grounds in 1873 were from: St. Patrick’s Catholic Church, Heidelberg Church, and Fairview Church. The Vigilant Fire Company held a picnic attended by six hundred persons on Saturday August 2nd. Dancing was kept up all day, with music furnished by Prof. H. Gipe’s orchestra. Also a number of plays were engaged in during the day. Most attended via a special train which left York at 7:20 A.M., with the rest taking the scheduled mail train at 3:30 P.M. All returned to York in a special train, which left the Tunnel Grounds at 8:00 P.M.

The York Gazette of July 7, 1874 provides a description of improvements to the Tunnel Grounds during that year: “No pleasure grounds in the vicinity of York present the same inducements to parties as are found at the Tunnel picnic grounds. The kitchen, tables and benches on the grounds, which have been cleaned up and put in first-rate order, are in themselves a great convenience, to say nothing of the large dancing platform. The well is in excellent condition, giving a plentiful supply of excellent clear water, in addition to which, a large croquet ground has been prepared, in size 40 by 80 feet, affording excellent room for 3 croquet sets at once. Space chosen for it has been nicely leveled off and completely sodded, so that every advantage might be afforded to players. No trouble can be anticipated from ticks, as the ground has been thoroughly cleaned and renovated. The resort is especially adapted for Sunday schools and the method of selling tickets now, will afford to them the exclusive right and use of the grounds.”

The following is an ad for The Annual Picnic of the Laurel Fire Company, No. 1 at Tunnel Grounds of the Northern Central Railway on Saturday September 12, 1874. The attendance reported was about 200.

Monday May 17th was opening day of the 1875 season at Tunnel Grounds, when the Cue Club of York held a picnic for about one-hundred; with music furnished by Sponsler’s Orchestra. Dance contests appear to begin that season at Tunnel Grounds. For example, at the “Uniform Picnic of the Union Steam Fire Engine Company No. 3” on Saturday August 28th, two handsome silver cups were awarded to the two best dancers; one to the best Lady Waltzer, and one to the best clog dancer. No professional dancers were allowed to contend for the prizes.

Early in the 1876 season, pupils of the York Academy held a picnic at Tunnel Grounds. The following year the initial newspaper articles appear where the use of Tunnel Grounds are not associated with any particular organization. The most popular are couples pooling their resources to rent Tunnel Grounds for dancing. For example, on Wednesday July 18, 1877, about twenty-five couples of young ladies and gentlemen left York on the 3:36 P.M. train. The couples danced to the music by the full Juvenile Orchestra; with a return train from Tunnel Grounds at 11:37 P.M.

A future post will provide memories of Tunnel Grounds and examine their location. For now, the Howard Tunnel surroundings are displayed via 1954 Topographic Map and April 23, 1938 Historic Aerial Photo.

Links to related posts in the area include: