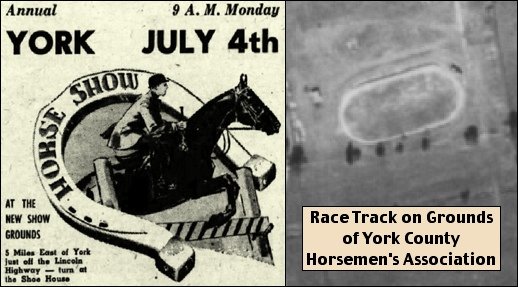 New show grounds of the York County Horsemen’s Association were dedicated in 1955 near the Haines Shoe House, by hosting the Annual York Horse Show on July 4th. (Ad is from The Gazette and Daily (York, PA) issue of July 2, 1955 and the Sept. 5, 1957 PennPilot Historic Aerial Photo shows the Race Track on the grounds)
Posted by Stephen H. SmithApril 14, 2019March 2, 2021 All Posts, Businesses, Family Histories, Pennsylvania, Roads, Various Locations, York County

Bussing horses to 1955 Race Track built near the Shoe House

Eddie Herr and Mahlon Haines were influential in establishing horse show grounds near the Haines Shoe House. Those York County Horsemen’s Association grounds were dedicated during 1955, in hosting the Annual York Horse Show on July 4th.

At the time, among Eddie Herr’s many business interests was a stable of busses billed as “Pennsylvania’s Most Modern Horse Transportation.” That business operated out of Herr’s property at 2600 East Market Street in Springettsbury Township. Herr called that 4-acre property, containing his suburban home, with multiple stables, “Belly Acres.”

“Belly Acres” is an interesting 4-acre property along the Lincoln Highway, which was never sold by Eddie Herr. The land was leased out for 99-years via a Trust set up for his descendants. A Holiday Inn opened on the property in 1964; it is now a Quality Inn & Suites. I’ll have a future post on Eddie Herr’s former Beer Distributorship; the building of which still sits on the front corner of the property.

This post focuses on Eddie Herr, Jr., who lived until 1975. His dad, Eddie Herr, Sr. died in 1947. It was Eddie Herr, Sr. who went into the insurance business in York during 1915. His former three-story office building, at 34-36 North George Street, is still topped in big letters: “EDDIE HERR BUILDING.”

Eddie Herr, Jr. worked for his dad for a while, however eventually branched out into multiple other businesses. All the while, an ardent interest in horses was ever present. Eddie built a suburban ranch house along Lincoln Highway East in 1937. On that property he built a horse stable compound. The back of his 4-acre property bordered Haines Park; the race track Mahlon Haines opened in 1928, after being denied use of the York Fairgrounds to stage weekly horse races.

In 1952, a majority of the York County Horsemen’s Association members were persuaded to move to the York Fairgrounds, at least for the major horse shows, which had long since occurred at Haines Park. The final horse show at Haines Park ran August 14-16, 1952. In 1953, Mahlon Haines sold Haines Park and initially the site was utilized as a trailer park, before being developed commercially. For the location, think businesses around the intersection of Eastern Boulevard and Northern Way in Springettsbury Township.

The Annual Fourth-of-July York Horse Shows were held at the York Fairgrounds during 1953 and 1954. Through those years an increasing number Horsemen’s Association members regretted the decision to stage their horse shows at the fairgrounds.

Taking matters into their own hands, and championed by Eddie Herr, The York County Horsemen’s Association purchased a 12-acre property in Hellam Township, near the Haines Shoe House, on December 6, 1954 (Deed Book 40A, Page 266). The following, annotated, September 5, 1957 PennPilot Historic Aerial Photo shows the location of the Race Track on the new grounds of the Horsemen’s Association; with respect to the Shoe House and the Lincoln Highway.

The new show grounds, in Hellam Township, of the York County Horsemen’s Association were dedicated in 1955, via hosting the Annual York Horse Show on July 4th. Directions on flyers: From the Lincoln Highway East, head past the Shoe House, north on Haines Shoe House Road, and turn right at the Horse Show sign; i.e. make a right onto Pleasant Valley Road. Later events held at the show site used the address 4799 Pleasant Valley Road. The ad for the inaugural Fourth-of-July horse show, at that site, noted the event ran from 9 A.M. until dark. Admission was 50-cents for adults and 25-cents for children.

The Annual Fourth-of-July York Horse Show was repeated during 1956 at the Hellam Township show grounds. Factions within the York County Horsemen’s Association wanted to start making significant improvements to the grounds immediately. While others members wanted to wait and see if Mahlon Haines talk about a large enclosed riding ring, near Wizard Ranch, would grow into a reality; before spending a dime on improvements to their own show grounds.

Mahlon Haines did follow through on designs for a large enclosed riding ring that could host horse shows. Those plans were finished in 1961. Mahlon named the complex Churchill Downs in honor of his second wife, the former Grace Churchill of London, England. Haines was still negotiating the purchase of the land where he wanted to build Churchill Downs, upon his untimely death in 1962.

In 1969, most of the York County Horsemen’s Association grounds, on the south side of a creek running through the property, were taken by the Commonwealth of Pennsylvania, Department of Highways, for the right of way associated with building the 4-lane, limited access, new Route 30 highway through the area. The rest of the grounds were sold off to expand the pasture of a neighboring farm. Afterwards, the York County Horsemen’s Association was dissolved November 27, 1970.

The following photo was taken at the location of the former entrance to the York County Horsemen’s Association grounds, off of Pleasant Valley Road. The photo looks south towards the lower meadow, where the Race Track was located. Route 30 can be seen in the background.

Today an occasional trace of the former race track on the Hellam Township grounds of the York County Horsemen’s Association makes an appearance; all depending upon the length of grass in the pasture. See the following 1957 versus 2019 aerial photos of the same area; and look closely at the 2019 Google image. Do you see the Race Track?

Why would occasional traces of the Race Track still be visible? Race Track surfaces usually contain a mixture of soil and clay; resulting in less grass growth; compared to growth in neighboring soil.

When traveling west on Route 30, three-fourth mile after crossing the bridge spanning Kreutz Creek Road at the Hallam Exit, glance off to the near side on your right. Specifically, glance just before passing the sign announcing “Mt. Zion Rd. Exit; 2-Miles.” You’ll be looking where the Race Track, near the Shoe House, was once located.