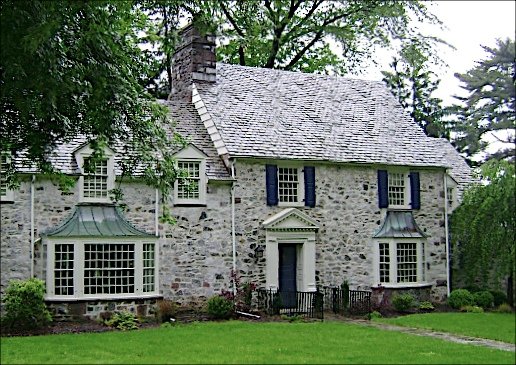 William S. Shipley [1879-1951] lived at this house, located at 1032 Smallbrook Lane in Wyndham Hills, Spring Garden Township, from 1937 until 1945; after which he permanently moved to his residence in Bayport, Long Island, NY, while maintaining a room in the Yorktowne Hotel, for return visits to York as he continued to serve as Chairman of the Board of York Corporation. (This present photo of the house at 1032 Smallbrook Lane is from York County Tax Assessment web site)
Posted by Stephen H. SmithApril 12, 2021August 2, 2021 All Posts, Buildings, Businesses, Family Histories, Manufacturing, Pennsylvania, Spring Garden Township, Talks, Various Locations, York County4 Comments

William S. Shipley is known for his leadership in the “York Plan” and for being the national spokesman for that defense production plan during World War II; however he also provided astute leadership during York Ice Machinery Corporation’s transition from Ice Making to Air Conditioning during the 1930s. William S. Shipley succeeded his older brother Thomas Shipley as president of Yorkco in 1930.

One of my recent 30-minute Zoom talks was titled “Yorkco during the 30s & 40s.” Following the presentation, a number of questions where asked about William S. Shipley. The first was a comment, with a question: “We often hear about Tom Shipley’s home, even though it no longer stands [on northeast corner of Roosevelt and Linden Avenues], but never hear where William Shipley lived; is his house still standing? I did not know the answer to that question or to several follow-up questions about William Shipley; which led to further research and hence this post.

York City Directories indicate after becoming president of the company in 1930, William Shipley’s home in York is at 911 Arlington Road; which is in the Springdale section of York. The following photo displays the Arlington Road frontage of the Shipley home. Aerial photos show the house having a significantly larger footprint compared to neighboring houses and it is situated on an extra wide lot, which also borders Springettsbury Avenue to Arrow Avenue.

While living at the 911 Arlington Road residence, William Shipley purchased a lot in the lower part of Wyndham Hills eventually had a stone house constructed. Mr. & Mrs. Shipley moved into that house, at 1032 Smallbrook Lane, in 1937; as shown in the introductory photo.

William Shipley was a 30-year employee of the company, upon being elected president of York Ice Machinery Corporation in 1930. For almost all of those 30-years, he lived in Brooklyn, New York, except for a very brief time in York during his initial employment.

An article in The Brooklyn Daily Eagle, issue of February 6, 1930, begins: “York, Pa. Feb. 6—William S. Shipley of Brooklyn was elected president of the York Ice Machinery Corporation at a special meeting of the board of directors. He succeeds his brother, the late Thomas Shipley, as president of the $30,000,000 corporation, which has 92 plants and branches in the United States and other parts of the world. The new president has lived in Brooklyn for the past 25 years, where he is affiliated with banking institutions and industrial enterprises. He is a director of the Merchants Bank of Brooklyn.”

Even though William S. Shipley was born and grew up in Jersey City, New Jersey, his earliest work experience was in Brooklyn, where he apprenticed in the machinist trade with the Nash Gas Engine Company of Brooklyn. This was prior to attending Cooper Institute in New York City; the college where his older brother Tom also studied Mechanical Engineering. Beginning in 1900, during breaks from college, William worked as a machinist at the York Manufacturing Company. During his brief stays in York, William roomed at the Bender Building, an apartment building at the corner of Penn and Market Streets.

William S. Shipley graduated with the Class of 1902 at Cooper Institute. William immediately began working full time at Yorkco, becoming the first graduate engineer to receive training in the company’s newly established Graduate Engineer Training Program (GETP). Over several months, that program exposes new graduate engineering hires, via classroom and hands-on training, to: refrigeration fundamentals, the engineering behind the application of company products, manufacturing practices, and sales techniques. I was the 985th graduate engineer to go through the GETP training, after hired by York Division of Borg-Warner in 1972.

On November 4, 1903, William Shipley was married to Anna E. Olsen at Our Savior’s Lutheran Church in Brooklyn, New York. Their daughter, Ruth Anne Shipley was born July 31, 1904 in Brooklyn. From that time until 1921, the family lived at 642 East 19th Street in Brooklyn.

In 1921 the William Shipley family moves to a larger home at 141 Argyle Road in Brooklyn. A summer cottage on Long Island, known as “The Farm” starts appearing in social columns as early as 1920; it is later described as The Farm on Snedecor Avenue or the Cottage on Snedecor Avenue. As an example, the September 17, 1923, issue of The Brooklyn Daily Eagle reports on the engagement of their daughter: “Mr. and Mrs. William S. Shipley of 141 Argyle Road and The Farm, Bayport, Long Island, announce the engagement of their daughter, Miss Ruth Anne Shipley, to Stuart Bruce McNaught, son of Mr. and Mrs. James McNaught of 92 Prospect Park West. Miss Shipley was graduated from Packer Institute, Class of 1923. Mr. McNaught is a graduate of Yale and is entering Harvard Law School this fall.”

After moving to York in 1930, the Shipley’s continued to spend summers on Long Island. The Bayport, Long Island, Social News within The Brooklyn Daily Eagle of July 10, 1932, is typical: “Mr. and Mrs. William S. Shipley of York, Pa., have arrived and opened their cottage on Snedecor Ave. for the season.”

One of the questions following my Zoom talk “Yorkco during the 30s & 40s,” concerned how many of William Shipley’s children were employed by Yorkco. In that talk I summarized the involvement by three sons of Thomas Shipley; that full story is described in the post: York-Shipley connections.

When William S. Shipley was president, and then Chairman of the Board of Yorkco; his older brother Samuel Joseph Shipley was vice president and treasurer; plus served on the Board of Yorkco for most of those years. Samuel started working at the company the same year his older brother Thomas Shipley arrived in 1897. Samuel J. Shipley retired from the company in 1943, after 46-years of service.

In 1940, the board of York Ice Machinery Corporation elected Stewart Lauer as the next president of the company. William S. Shipley became Chairman of the Board, freeing him up to become the national spokesman for the York Plan during World War II.

In 1945, at the end of the war, Mr. & Mrs. William S. Shipley sold their house in York, at 1032 Smallbrook Lane, to Howard D. Campbell. The Shipley cottage, on Snedecor Avenue in Bayport, Long Island, NY became their year-round residence. Although a room in the Yorktowne Hotel was maintained, for numerous return visits to York as William continued to serve in various York organizations and as Chairman of the Board of York Corporation.

William S. Shipley was involved with the reactivation of the “York Plan,” in York for the Korean Conflict. On Thursday January 11, 1951, William was at the Pentagon, for a conference discussing defense production with Undersecretary of the Army Archibald S. Alexander. Friday, William Shipley chaired a board meeting of York Corporation in York; before returning to the Shipley cottage, on Snedecor Avenue in Bayport, Long Island, NY.

Saturday there was a social gathering at the cottage. William S. Shipley passed away that evening at 10:30 P.M., following a sudden heart attack. He was 71 years old.

4 comments on “At home with William S. Shipley”