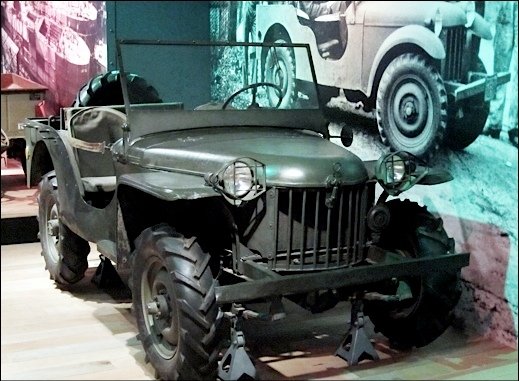 Seventh (BRC) Bantam Reconnaissance Car, the "Oldest Surviving Original Jeep," on display at Heinz History Center, Pittsburgh, PA. A York-Hoover Body, from the firewall to the back bumper, was in the BRC Pilot Model, which is pictured on the wall; and in all 70 of the follow-up batch of BRC vehicles. (2015 Photo, S.H. Smith)
Posted by Stephen H. SmithAugust 10, 2022 All Posts, Automobiles, Businesses, Manufacturing, Maryland, Pennsylvania, Transportation, Various Locations, York County

William Reed submitted several photos of the first Jeep undergoing testing at the Army’s Holabird Motor Transport Depot in Baltimore, and shared an inadvertent connection his father, Bill, had with that testing. The body portion, for driver and passengers, of the first Jeeps ever made were fabricated at the York-Hoover Body Plant on Wheatfield Street in York.

The American Bantam Car Company, in Western Pennsylvania, produced the earliest vehicles, which became the Jeep; then known as ‘BRC’ for Bantam Reconnaissance Car. The Heinz History Center displays the seventh Bantam Reconnaissance Car, out of the build of 70 that were delivered to the Army during November and December of 1940. On the wall behind the “oldest surviving original Jeep” is a photo of the 49-day prototype, designated as the BRC Pilot Model.

That photo provides an excellent visual to distinguish between the earliest Bantam Reconnaissance Cars. The BRC Pilot Model, pictured on the wall and delivered to Camp Holabird on September 23rd, 1940, features a rounded-nose, rounded front fenders and extra-scallop on the sides. The build of 70 BRC vehicles, delivered to the Army during November and December of 1940, featured a rounded-nose, flat front fenders and streamlined sides.

William Reed first learned about his father’s service at Camp Holabird when his father was in his 90s. It was at a family reunion, where an uncle shared a few Army photos, found on the Internet, of an early Jeep undergoing testing at that base.

Most of the time Bill Reed was at Camp Holabird, his primary daily task was washing base and test vehicles. Following each day of testing, the test vehicles were carefully washed; to allow better inspection by engineers and mechanics, for the onset of cracks developing, loosening of parts, or the malfunction of components.

Bill Reed recalled the day he drove an officers car out of the vehicle wash area. Bill pulled out rather fast, spinning the tires, which propelled a rock into, and breaking, the windshield of the vehicle pulling in behind him; an early Jeep.

It took those Army photos of a Jeep on the test track at Camp Holabird, for his father to finally share the story of his responsibility for no windshield on the Jeep. As evident in the following photo of the Jeep powering out of the mud hole and slippery ditch section of the rugged torture test track.

The introductory photo of this post also appeared in prior YorksPast posts. William Reed used that photo to, correctly, conclude the photos passed around at the reunion were of the first Jeep, i.e. the ’40 BRC Pilot Model, since it is the only Jeep to feature all three: a rounded-nose, round front fenders and extra-scallop on the sides.

Recently William Reed was looking through a box of his dad’s photos, and saw the printouts of the photos again. He remembered his father broke the Jeep windshield a day or two after press photographers were allowed on the base to photograph several vehicles under test; including the Jeep.

William wondered if I had ever seen any of those press photos? Utilizing Newspapers.com, the earliest of those Associated Press photos appeared in the New York Daily News of October 5, 1940; which is 12-days after the BRC Pilot Model was delivered to Camp Holabird. Later an Army photo was taken from almost the same viewpoint as the following Associated Press photo.

Three days before the publication of the first press photos, The Baltimore Sun contained the earliest news reports about the initial testing of the Jeep; then described as the “New Midget Truck.” Quoting the October 2, 1940 issue of The Sun, page 24.

“A 1,000-mile cross-country road test of a new bantam motor truck will be run next week within the reservation of the Holabird Motor Transportation Depot. The run will be over a course which simulates actual road conditions—hair-pin curves, steep grades, corrugated pavements much like old-fashioned corduroy log-surfaced roads, along with mud holes and slippery ditches.”

“What army officials describe as preliminary road tests are now being run to disclose any weaknesses that might warrant a change in specifications before the manufacturer, awarded the contract for seventy of the trucks, is given the word to go ahead.”

The American Bantam Car Company, in Butler, PA, was the only company to meet the nearly impossible request by the Army; to design, build, and deliver a prototype to Camp Holabird in just 49-days.

How did Bantam do it; when bigger, better-financed companies, such as Willys and Ford, could not. It probably helped that Bantam was on the verge of bankruptcy and their plant only had a skeleton crew. It was a desperation move. Bantam relied almost entirely upon off-the-shelf parts from their previously produced Bantam Roadster and readily purchased parts. The two long-lead items had to be a custom four-wheel-drive-train and a main body designed and built to the layout.

Bantam had York-Hoover Body Corporation design and produce the custom body, from the firewall to the backend. The following is my outline sketch of the York-Hoover Body produced for the ’40 BRC Pilot Model.

While at the Detre Library & Archives at the Heinz History Center in Pittsburgh, I was told invoices show two of these York-Hoover Bodies arrived at the Bantam factory on September 16th. This was about the time the Spicer four-wheel-drive-assembly also arrived. It was a frantic week at Bantam; getting the Pilot Model assembled, tested and painted for delivery by the Army’s September 23rd, 1940, deadline.

There are remembrances of a hand-made body also fabricated at the Bantam factory, in case the York-Hoover Bodies did not show up in time. Some think the hand-made body may have been used in the ’40 BRC Pilot Model; I think those chances are slim. York-Hoover Body Corporation had a good reputation for producing robust, durable truck bodies; I believe that is why Bantam selected them in the first place and why a York-Hoover Body was in the Pilot Model, that would be beat-up by the Army during performance testing.

The corduroy log-surfaced road section of the rugged torture test track at Camp Holabird created the ultimate accelerated life testing; to rapidly discover weak body sections or the susceptibility of parts to looseness or break.

The 35-degree incline section of the test track at Camp Holabird was a consistency of performance test.

The Holabird Motor Transportation Depot was located within southeastern part of the City of Baltimore; south of Holabird Avenue, between Broening Highway and Dundalk Avenue. It was about 4-miles from the Inner Harbor and during WWII encompassed 350-acres. Most of that site is now the Fort Holabird Industrial Park.

Two other Jeep prototypes, from other manufacturers, were delivered to Camp Holabird, and although late, the Army tested them. The Willys’ prototype was delivered on November 13th, 1940 and Ford’s prototype was delivered on November 23rd, 1940. Ford had the first design with the signature flat nose, with recessed headlights; one of the key Jeep features that figured prominently in the Ford vs. Willys battle over the rights to the “Jeep brand” following WWII.

In 1941, Bantam, Willys and Ford all received contracts for 1,500 next generation “Jeep” prototypes for further evaluation and testing. York-Hoover Body Corporation had to turn down making the bodies for the 1941 Bantam “Jeeps”, due to many other production commitments. They were already making bodies for military ambulances, vans, and other supply vehicles, for the Army Signal Corps, Quartermaster Corps and the Navy.

Ultimately the Willys design won out and Ford was selected as the secondary supplier; with Ford building to the Willys design, so that all Jeeps had interchangeable parts. The American Bantam Car Company produced a few other “Jeeps” in 1941, but none thereafter.

York-Hoover Body and the Jeep