Hoard of gold and silver buried in York County 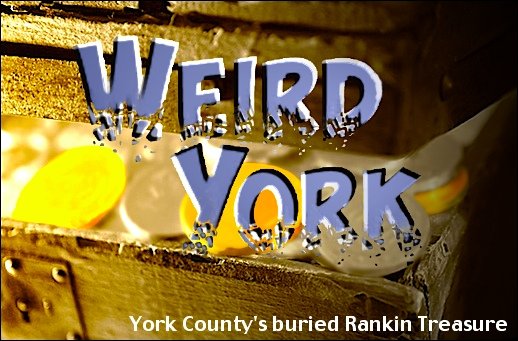 A September 7th, 1908 article, in The York Daily, describes another attempt to find the Rankin Treasure in York County, PA. This tale of buried treasure is one of those Weird York curiosities that just might still be true.

James Rankin allegedly quickly buried a hoard of gold and silver on his York County property in 1778, just prior to being arrested and jailed in York Town as a “traitor.” Click on this LINK for a Full View of the illustration in this post if details are cut off in the cropping of illustration.

Rankin had remained a British loyalist during the Revolutionary War and was dubbed a “traitor” when he became involved in a conspiracy to bring the British troops across the Susquehanna River at the time when the Continental Congress was meeting in York Town during 1777-78. James escaped from jail and fled to the safety of British troops and thence to England; evidently planning an eventual return, to claim his buried treasure after the rebellion was squashed.

Prior to the Revolutionary War, James Rankin was one of the wealthiest landholders in York County. The “American Loyalist Papers, Vol. 42, Folio 132” list 20 properties belonging to James Rankin. Property #1 on this list is the 377-acre property that includes the Grist Mill later known as Loucks Mill; which was located where Route 30 presently crosses the Codorus Creek. James Rankin’s 377-acres on this main property extended from the Codorus Creek eastward to the present eastern boundaries of the Harley-Davidson property, northward to Paradise Road and southward slightly past Mill Creek. Rankin purchased these 377-acres at Sheriff Sale on October 27, 1772, for 1,564 Pounds. While Rankin was not the original mill owner, records show he made significant improvements during his ownership.

Early in 1778, laws were enacted allowing estates of “traitors” to be forfeited. The 377-acre property, with improved Grist Mill, was exposed to public sale at the Court House in York Town on October 14, 1778. Conrad Leatherman was the winning bidder at 35,201 Pounds, with the proceeds split between the State and National Treasuries. Several other individuals would own the Grist Mill property until the first of four generations of the Loucks family became the owners in 1805.

The 1908 article in The York Daily provides details about the renewed interest in finding the Rankin Treasure: “Several years ago [i.e. prior to 1908], while plowing in a field west of the railroad at Loucks’ Mill, a laborer saw a small disc lying on the ground and picking it up saw that it was a coin, but was unable to tell of what value. Several took the coin to a jeweler and learned that it was an English guinea, equivalent to five dollars in the United States money. When it was learned that the coin had been found in the field, there was a rush of people, all eager to share in the supposed hidden treasure, however, none of them ever was known to have had any success in his quest.”

The search for buried treasure in 1908 was the latest in a sequence of searches, usually triggered by finding yet another English coin. The 1908 article concluded by noting the son of James Rankin returned after the Revolutionary War and supposedly secured the treasure his father had hidden, as he spent money before his return to England in a lavish manner, not in proportion to his means upon his arrival at this place. With coins still sporadically appearing in fields over 100-years later, maybe the son did not retrieve all of the Rankin Treasure.

This tale of buried treasure is one of those Weird York County curiosities that just might still be true. Did the son of James Rankin secure all of the treasure his father buried? Or, is some of that treasure still to be found?

A collection of Weird York County curiosities will be presented during the December 6th evening to unravel York County history (part 3). I will be one of five local historians participating; along with June Lloyd, Scott Mingus, Jeri Jones and Jim McClure.

The event is at a new location this year; DreamWrights Center for Community Arts at 100 Carlisle Avenue in York; with parking to the rear of the building. The program starts on December 6, 2017, at 7:00PM. Tickets are $10 for general admission and can be purchased at this site. Do not put off purchasing your tickets; the event is approaching a sell-out.