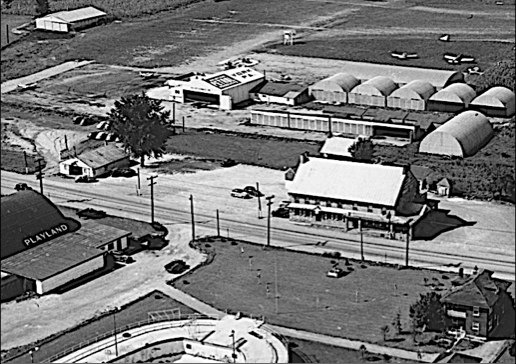 The J. David Allen photo is one of his many aerial photos shared during the initial Springettsbury Township History Night. “Aviation in Springettsbury” was the topic of that event on July 14th; where my presentation covered 40-years of aviation stories related to the township, and township resident Dave Heltzel shared the aviation exploits of his father, Robert Heltzel, who was one of the pilots for J. David Allen.

The YouTube video of Springettsbury Township History Night on July 14, 2021 is accessed through this link.

I’ve received many follow-up comments, submissions and questions in the weeks following that event; which will be shared in subsequent YorksPast posts. In turn, the submissions will be added to the Springettsbury Township Historic Preservation Committee Archives.

In this post, I’ll begin by addressing questions about the 1925 Air Navigation Map; which corroborated land records research in locating the 1925 Stony Brook Army Air Field on the land now situated between the York County Prison and Pleasant Acres.

In 1923, Congress funded the creation of a series of air navigation aids. One result is the 1925 Air Navigation Map No. 46; between early Army Air Fields, located southeast of Washington, D.C. and at Middletown, PA. The direct route between these Air Fields passes over York County, such that our whole county was included on the map.

The quick acceptance and establishment of a landing field within the infield of the yet to be built Great Lincoln Speedway, in Springettsbury Township, coincided with a need for a few more permanent emergency landing fields on the Washington, D.C. to Middletown flight route. The urgency involved map publication timing, because the first of a proposed series of every five years Air Navigation Maps was scheduled to be published for this route in a matter of weeks, when the offer was extended to the Army in July of 1925.

The general idea was to show features, which pilots could use to navigate by sight, and to precisely place landing site symbols relative to those features. A symbol, appearing as a pie divided into 8-slices, represents Government Army, Navy or Marine Landing Fields, and a plus sign, represents Emergency or Unimproved Landing Fields. The Army Landing Field at Stony Brook was designated an Emergency Landing Field due to the Army installing a wind gauge and other support equipment.

I’ve pointed out features on the following Harrisburg to York, PA, section of the 1925 Air Navigation Map No. 46, between Washington, D.C. and Middletown, PA. The map was compiled and reproduced by the Engineer Reproduction Plant, Army Corps of Engineers, under the direction of the Airways Section, Office Chief of Air Service.

Newspapers reported Lieutenant LeBrou, from the Middletown Army Air Field made the careful measurements of the location of the Army Landing Field in Stony Brook relative to the major roads and railroads in the area. The 1925 Air Navigation Map indicates the Emergency Air Field in Stony Brook is west of where the railroad and major highway cross, and located north of both the major highway and the railroad. The Air Field placement on the 1925 Air Navigation Map is in agreement with speedway and infield Air Field placement through deed mapping; i.e. the land now situated between the York County Prison and Pleasant Acres.

Other questions dealt with dating J. David Allen aerial photos. Some photos are marked with the precise date they were taken, while others were not dated. In the following THEN and NOW aerial photos looking north in Springettsbury Township, I’ve dated the THEN aerial photo as circa 1947.

Why circa 1947? — because Playland swimming pool opened in the Summer of 1946 (the motel around the pool deck was not added until 1962). The upper bracketing date is November of 1947, when a group of additional hangars were completed at Valley Airport; which are not shown on the circa 1947 photo.

Why is the introductory aerial photo within this post circa 1948? — “YALLEY AIRWAYS, INC” can be seen over the main hanger entrance in this zoomed in section of the introductory aerial photo within this post. The aerial photo is dated circa 1948; because the whole photo includes the group of additional hangars, completed in November of 1947. The upper bracketing date: effective July 15, 1949, Valley Airways, Inc. was purchased by George H. Whiteley III and Earl T. Hull; the new owners noted, as soon as possible, the name of the field will be changed from Valley Airways Airport to York Whitehull Airport.

Stories of Aviation in Springettsbury

Exercising Buffaloes via Airplane in Springettsbury