After my presentation on the First 60-Years of York Manufacturing Company and York Ice Machinery Corporation at the Agricultural and Industrial Museum, as a Second Saturday Program, the huge 1904 A-Frame Ammonia Compressor was demonstrated.  Questions arose, that I’m answering in greater detail via YorksPast.  Related posts include:

The 1901 York Manufacturing Company Catalog noted the type of steam engine utilized; a Cross-Compound Corliss Steam Engine.  I examined several stationary steam engine books, however my primary reference is Nehemiah Hawkins’ 1904 book New Catechism of the Steam Engine for details about this engine’s steam flow.  These steam engines were widely used to power industrial America into the early 1900s, however they were rapidly replaced with the advent of electric motors; few Cross-Compound Corliss Steam Engines of this size still exist.

The Corliss Steam Engine is named for George Corliss.  George was issued U. S. Patent No. 6162 on March 10, 1849 for a steam engine with a unique arrangement of steam admission and steam exhaust valves.  His valve arrangement and control resulted in superior efficiency, smooth running speed and automatic response to changes in load.  I’ll discuss the internals of the Corliss Steam Engine in greater detail in part 2.

Most Corliss Steam Engines were sold complete; i.e. engines, driving a shaft and flywheel onto which a belt drove an overhead line shaft or another piece of machinery.  For the YORK Compressor application, more robust bearings and added mass to the flywheel were required.  Therefore York Manufacturing Company was just purchasing the drive cylinder parts of the steam engines; as indicated in the illustration at the beginning of this post.

This photo shows the installation of the Cross-Compound Corliss Steam Engine on the YORK Vertical A-Frame Ammonia Compressor.  The high-pressure side of the steam engine is closest to the viewer in the lower right of this photo. 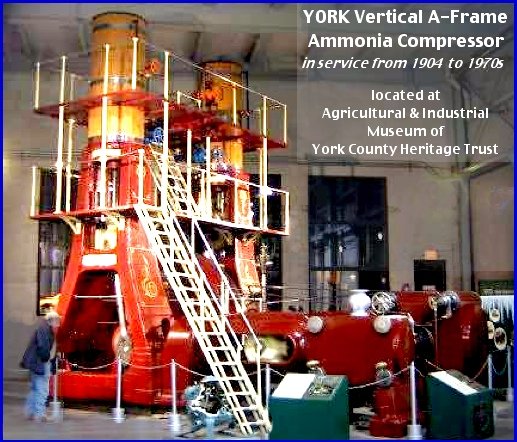