High Jinks on the Susquehanna Trail

Story of the Susquehanna Trail in the Good Roads Movement: Part 18

I was not successful in finding an illustration of an original Susquehanna Trail roadside marker in the many newspapers that I perused to obtain the various articles in this series. I did come across the following descriptive elements within 1919 through 1924 newspaper articles: the marker is 3 feet by 2 feet; the marker is wood; the marker is painted white with black lettering; the marker contains an Indian head symbol; and references are made to a road marker stencil.

Based upon those descriptive elements, this is my visualization of what an early stencil-applied Susquehanna Trail marker might have looked like in 1924. My searches on the Internet did turn up a few round marker variants, which appear to be modern renditions of a round marker that might have been used later in the history of the Trail. If anyone knows the existence of any original Susquehanna Trail markers, please post a comment.

The Trail quickly became a favorite route of motoring tourists. Motels along the trail quickly began to see the benefit of being located on the trail. This produced road marker shenanigans; i.e. the appearance of fake Susquehanna Trail road markers or using stencils of the Susquehanna Trail Indian Head Symbol as fake markers on electric poles and telephone poles. This was all done to direct the flow of traffic by motels or through towns, close to, but not on the Trail. 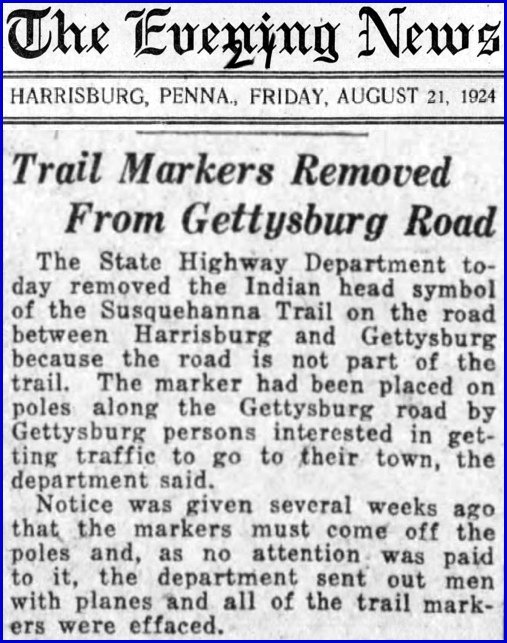 The State Highway Department today removed the Indian head symbol of the Susquehanna Trail on the road between Harrisburg and Gettysburg because the road is not part of the trail. The marker had been placed on poles along the Gettysburg road by Gettysburg persons interested in getting traffic to go to their town, the department said.

Notice was given several weeks ago that the markers must come off the poles and, as no attention was paid to it, the department sent out men with planes and all the trail markers were effaced.

Next Friday, this series will conclude on the Story of the Susquehanna Trail in the Good Roads Movement.