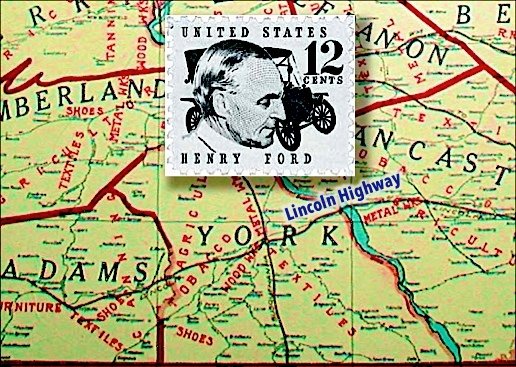 Henry Ford motored to York on the Lincoln Highway in 1929

Dan Trimmer inquired about a story often shared by an uncle; who, while working at the York Motor Company in 1929, claimed to have repaired a flat tire on the car of Henry Ford. Newspaper reports do place Henry Ford in York County, Pennsylvania, on June 7, 1929; where he visited several places, including the York Motor Company. In June of 1929, Henry Ford was on an automobile journey across Pennsylvania; from east to west, primarily on the Lincoln Highway.

Dan’s query was an attempt to add to, and verify, a story often shared by his uncle Frank Trimmer. Dan assumed at one time, it was Frank’s daughter that wrote: “My dad worked at York Motors during the year prior to our move to Trenton, New Jersey. York Motors was the biggest Ford dealer in the City of York. The dealership was on George Street at Baptist Alley. One day, Henry Ford himself showed up. Dad repaired a flat tire on Henry’s car. Later, scuttlebutt involved a local antique dealer. Word got out, one of his workers was observed planting a nail in the tire. It served its purpose, extending Henry Ford’s antique buying spree.”

Dan noted he knew: “After the start of the Great Depression [October 29, 1929], however before Christmas of 1929, is when Frank’s family moved to New Jersey; to share a home with his brother’s family. Should place the tire repair incident in the late 1928 to 1929 range.” Dan could not locate any Baptist Alley, Avenue or Street, in the City of York and asked for my help on locating York Motors; plus any details I could discover about Henry Ford’s visit.

York City Directories from the 1920s, show what was remembered, by Frank Trimmer, as York Motors, was actually called the York Motor Company, Inc. The business was a Sales and Service Dealership for Ford and Lincoln cars; plus Fordson Tractors. Early directory listings note it was located at the “Corner South George and Baptist Alley, Opposite Post Office Building.” Later directories indicate the address: 229-231 South George Street. The York County History Center has Sanborn Fire Insurance Maps that show both descriptive locations, of this business, place it at the same site.

It appears sometime during the 1930s, Baptist Alley in York was renamed Hope Alley, and then Hope Avenue.

Everyplace that Henry Ford went, his actions were news. As such, period newspaper articles, from many sources, between Chester, PA and Gettysburg, PA, serve as the basis for a brief account of Ford’s activities on June 6th and 7th, 1929.

The day before his visit to York County, Henry Ford was in Atlantic City, New Jersey; where he spoke briefly at the National Electric Light Convention. That morning, he also purchased the very first Edison Jubilee United States Postage stamp, upon its first day of issue. The two-cent stamp honored the 50th Anniversary of the development of the first practical electric light bulb by Thomas Edison. Mr. Ford had to borrow two-cents to buy the stamp; which made news in nearly every newspaper across the nation.

Later that day, i.e. June 6th, Henry Ford was in Chester, PA inspecting a new Ford Motor Company Final Assembly plant, which had reached full production. On a 50-acre site, that plant on Front Street, from Fulton to Pennell Streets, had begun producing cars, with limited assembly operations, in March of 1928. Mr. Ford spent the night in Chester.

June 7, 1929 marked the start of Henry Ford’s journey across Pennsylvania; an excursion where Mr. Ford stopped to purchase numerous antiques, while also visiting a few Ford dealers, as he traveled primarily along the Lincoln Highway to Pittsburgh; where a private rail car awaited, for his return home. Joining Mr. Ford on this motor trip were his personal secretary Frank Campsall and H. N. Bradford, the assistant manager of the Ford Motor Assembly Plant in Chester, PA. Undoubtedly throughout the trip, Mr. Ford and Mr. Bradford had many discussions about the Ford Motor Company Final Assembly plant in Chester.

It is not known if any stops were made in York County, prior to the Ford party walking into the Hotel Yorktowne at 12:30 P.M. and ate in the hotel dining room. After lunch, the three men made a tour of the antique shops on East Market Street.

Upon returning to the car, a local hotel employee informed Mr. Ford about a flat tire; upon which Henry Ford ordered the car serviced by his local dealer, the York Motor Company along South George Street. As the tire was being repaired, the Ford party spent additional time antique shopping.

It was about 3:00 P.M. when the Ford party stopped for gas at P. Stambaugh and Sons, 367 North Main Street in Spring Grove. The business was also a Sales and Service Dealership for Ford and Lincoln cars, Ford trucks; plus Fordson Tractors.

Pierce Stambaugh, senior member of the firm recognized Henry Ford in the back seat and ended up exchanging greetings with him. The Hanover papers reported the Ford party next passed through Hanover at about 3:30 P.M.; and also noted the party had been “directed through this place over the detour route;” hence it is likely some major construction was taking place on the Lincoln Highway between York and Gettysburg.

So far as could be learned, the Ford party made no stop in Hanover. It was reported that Henry Ford’s town sedan passed through Gettysburg at about 4:00 P.M. Henry Ford was at the wheel upon that sighting.

The York Motor Company was organized in June of 1922, as dealers in Ford cars, Fordson tractors and Lincoln cars. It was established as a partnership between Marion O. McEachern and David P. Klinedinst; and later was operated solely by the Klinedinst family. The business began in a small building on North Cherry Avenue in the rear of 31-36 North George Street.

The York Motor Company grew rapidly, such that at three months old, a move was made to a building in the rear of 241 East Philadelphia Street. That location was outgrown by years end; and on January 1st, 1923, the site on South George Street at Baptist Alley was purchased; where the old buildings were razed to construct the facilities of one of the largest Ford dealerships in Southern Pennsylvania. However the business did not survive the Great Depression.

After the closing of the York Motor Company, the Auto Showroom at 229-231 South George Street and the Repair facilities to the rear of the showroom became Buick dealerships; initially Miller Buick and later Forest Buick. And on the south side of East Baptist Alley, the Auto Service Station became the Ness Tire Service business; a Firestone tire dealership.

The following photos of the 229-231 South George Street showroom storefronts, when occupied by the Buick dealerships, are from the York County History Center web site:

Golden George Beauty Supply now occupies the 229-231 South George Street building in York PA; which was initially constructed in 1923 as a showroom for the York Motor Company; a Ford dealership.

Where to buy a Hupmobile, Marmon, LaSalle, Erskine, Oakland or Pierce-Arrow in York?.