This is a frame from a 1928 British film. The scene is the Love Nest perched over Kreutz Creek in Hellam Township, York County, PA. Katina Snyder of the Kreutz Creek Valley Preservation Society graciously provided YouTube links to two short films that British PATHE shot at the Love Nest. One of their members, Jeff Clinton, was analyzing the Kreutz Creek Presbyterian newsletters and discovered in the 1927 newsletter a mention was made that the PATHE film company was filming “The Love Nest.” That clue resulted in their Google discovery of the two YouTube videos.

If you are reading this on the Ydr.com site, click on this LINK for a Full View of the illustrations in this post on the original YorkBlog site; since the ydr.com site will occasionally cut off important details in the cropping of illustrations. The 1928 film shows a couple climbing the stairs, looking out from the porches, sitting on a porch bench and also using a rope to draw water from Kreutz Creek. Here is the YouTube link to the 1-minute, 17-second, “Just a Love Nest.”

“Just A Love Nest” was released by British PATHE on April 19, 1928. It would have been one of several shorts shown prior to feature films. The April 19th film release likely prompted the following United Press story of the Hellam Love Nest; which started appearing in newspapers across America on April 28, 1928:

“Hellam, Pa., April 28_(U.P.)_A cottage in the tree-tops, surrounded by a myriad of brilliant colored lights and overlooking a placid little brook—that is the honeymoon ideal as conceived by Morgan Emig, a farmer near here.

“And the strange part of it all is that Emig has built this love nest for the benefit of others and it has already been used by honeymooners from all parts of the country.

“Situated among the branches of a huge buttonwood tree, the cottage is equipped as thoroughly as any of its size on the ground, containing electric lights, dishes, stove for cooking, complete bedroom and living room suites and has porches on three sides.

“To approach the love nest, one must first enter Emig’s farm and traverse the quarter mile between the main highway and the cottage.

“On arrival there is a flight of steps leading up the trunk of the tree to a height of about 25 feet, where they turn and lead out along a branch to a spot directly over the stream where the cottage is located.

“The cottage rests on beams supported by steel cables and was built about eight years ago. “I first got the idea when a bunch of kids wanted to build a treehouse and laid a platform in the branches. I then wondered why a substantial house could not be made there and started work. Each year I made improvements and added a little something to do, but now, in my estimation, it is about perfect,” Emig said and he was not far wrong.

“The cottage is weatherproof and even has a backyard. Scattered about among the branches and amid the many-colored lights are chairs and benches for use in the summer as Emig says his house is occupied virtually the year round.

“Aside from its use by honeymooners, Emig rents the cottage for card parties, dances and like social gatherings. A radio is provided with two loud speakers, one of the speakers being located in the cottage and the other in the top of the tree.

“Of course, it is making me money, as it is in use the year around and I charge rental for the use of it but the biggest kick I get out of it is from the honeymooners and others who get the benefit of it,” he said, “and I have a lot of fun improving it.”

“Emig believes in advertising and at nights the tunes from the loud speaker can be heard on the main York to Harrisburg [The U.P. reporter evidently was not very familiar with local roads; this should be York to Wrightsville] road a quarter mile away and the lights in the huge tree can be seen from a great distance, resembling a monster Christmas tree.” 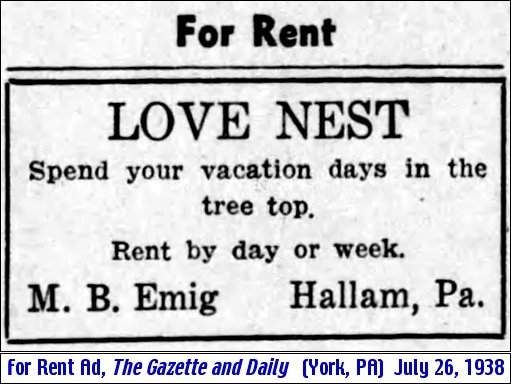 Besides all the free publicity from the United Press article, this is the type of advertising that Morgan Emig did to keep the Love Nest filled. The local For Rent ad is from the July 26, 1938, issue of The Gazette and Daily. In 1942, Morgan Emig’s brother Howard adds his touches to the Love Nest and operates it until a fire destroys the tree house on January 13, 1950.

Whereas the 1928 “Just A Love Nest” was a silent film, the 1930 film “Climbing Trees to Dance” had sound recorded by the R.C.A. Photophone System. The sound is from members of a jazz band sitting on branches and on top of the tree house, while couples dance on the porches. The jazz band is playing “How Am I To Know.” At the end of this short film is a night shot, with the band silhouetted from behind by light and smoke from flares.

Here is the YouTube link to the 1-minute, 37-second, “Climbing Trees to Dance.”