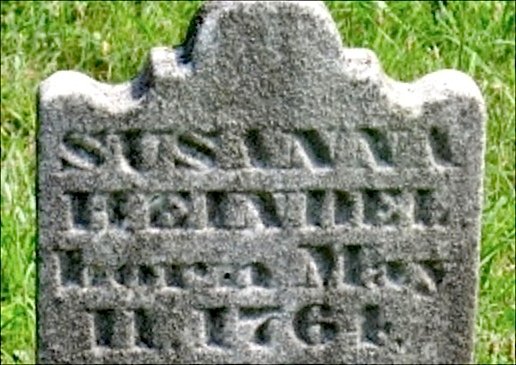 The term Heindel Trilogy was coined by Lila Fourhman-Shaull to describe a location in North Codorus Township. Several years ago, while volunteering at the York County History Center, a couple asked me about the location of Heindel’s Graveyard near a schoolhouse. Lila overheard and immediately announced “Located in North Codorus Township at the Heindel Trilogy; where Heindel’s Graveyard, Heindel’s Schoolhouse and Heindel Road converge.”

This is a Heindel Road view of that location, in which Heindel’s Schoolhouse is pointed out behind Heindel’s Cemetery. The location is in the northeast corner of North Codorus Township; about one-mile northeast of New Salem.

It is believed that Jacob K. Boyer began to hold religious serves at this location; after he acquired the property in 1815. A nearby plot of ground began to be utilized as a graveyard during his ownership. The next owner, George Boyer, only owned the 139-acre property a few months; prior to selling to the first Heindel owner, Lawrence Heindel in 1831.

Two years after Lawrence Heindel acquired the 139-acre property, he granted 1-acre to “Henry Miller and David Smith, Trustees of the Lutheran and Presbyterian Congregation.” Thus legally setting aside land for a place of worship; however a building may have already existed, per such wording in the deed transaction.

The 1834 Pennsylvania Law creating free public schooling, for all, was optional; that is each municipality in the state could decide if it wanted to enact school property taxes and establish a public school district. It would be 1870 before the last township in York County, Manheim Township, adopted the Common School system.

The primary reason the need for schools was questioned, was strongest in heavily rural townships; where the need for children to help on farms was greatest. North Codorus Township adopted the Common School system in 1852. The following September 7, 1852 ad notes the School Directors of North Codorus School District wish to employ 10 Teachers of Common Schools.

The School Directors either build one-room schoolhouses, such as Stover’s Schoolhouse or rented space in existing buildings; which was initially the case with the Sunday School Building next to the Heindel’s Graveyard. The building was a Heindel’s Schoolhouse during weekdays and continued to function as a religious facility on the weekend. In 1852, school was in session for only four months; November, December, January and February. The salary for teachers was from $18 to $19 per month.

In 1873, the North Codorus School District purchased, from John Heindel, additional land; so that they owned the driveway out to Heindel Road and additional land around the building. Shortly after 1873, the old structure was removed and the present one-room brick schoolhouse was built by the School Directors on the original foundation. The church was allowed continue use during the weekend; which lasted until 1919; when Heindel’s Church School was disbanded.

This is what Heindel’s One-Room Schoolhouse looks like today. The final students, educated in this building, attended during the 1948-1949 school year. The Spring Grove Area School District could not immediately sell the building, due to some legal issues; which were not resolved until 1966.

In 1967, Dr. Robert J. Harcourt purchased Heindel’s One-Room Schoolhouse. The initial private use of the building provided a summer retreat for the Doctor, his wife and five children.