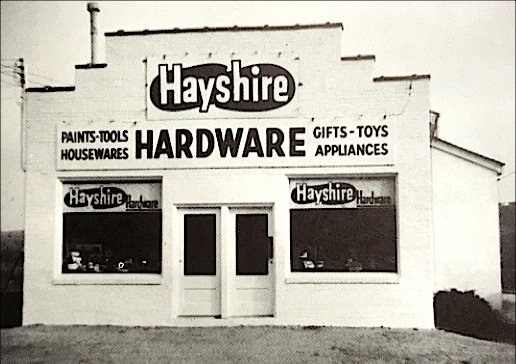 Before Lowe’s and Home Depot, many neighborhood Hardware Stores dotted the landscape of York County. Rob Leiphart shared a photo and some insight about one such store, Hayshire Hardware; named after, and located within, a suburban development in Manchester Township.

Before Rob’s parents married, his mother, Ruth, worked at Hayshire Hardware and at a prior business in that same building. Seventy years later that building still stands at 2805 North George Street.

Rob Leiphart e-mailed: “The Hayshire Hardware business moved into a building vacated by a grocery store. Mom worked at the grocery store. It was her first steady job away from the farm. In her third year most of the remaining regular customers defected to chain stores. The grocery store closed. The same year, Mom returned to the same building as one of the initial employees at the hardware store. Her section of the store sold Sunbeam appliances, cooking ware, and toys.”

Rob inquired if I could uncover the name of the grocery store. He also observed the grocery/hardware building is the same build type as the Lincoln Highway Garage and wondered if it started out as a service station.

Within Newspapers.com, notices were found, which indicate the grocery story, at 2805 North George Street, was Cousler’s Food Market. It was in business from April of 1951, and possibly earlier, until October of 1955.

The Hayshire area was a development planned by Attorney George Hay Kain, Jr. His ads advertised: “You’ll like Hayshire. Yorks First Complete Community; Church, School, Homes and Stores.” The Homes were advertised as “More Than 2,000 Sq. Ft., comfortable for Living, Priced at only $13,500.” The initial section of Hayshire contained 350-lots; with the initial homes constructed in 1956.

In 1955, the Central School District Board of Education took up the offer by George Hay Kain, Jr. of 11-acres for the new school. In December of 1955, the bids to build the 12-room Hayshire School were opened; $358,844 was the construction cost. The school opened in the Fall of 1957; and since then, it has been expanded several times.

In 1955, George Hay Kain, Jr. donated 3-acres to the Board of National Missions of the Reformed Church, for constructing a new church. It was intended for a newly formed congregation; which, during their initial years, conducted worship services in Alert Fire Company Hall in Emigsville. Groundbreaking for construction of the church on the Hayshire site began in March of 1959. The Hayshire United Church of Christ was occupied for the initial worship services in November of 1959.

Perhaps the oldest building, still standing, within Hayshire, once housed Hayshire Hardware at 2805 N. George Street. I wonder how many businesses operated in that building over the past 70-years? Rob Leiphart thought it was an ice cream shop, at one time. That building presently is occupied by York Dance Expressions.

Emig Mansion and the Underpass relic.