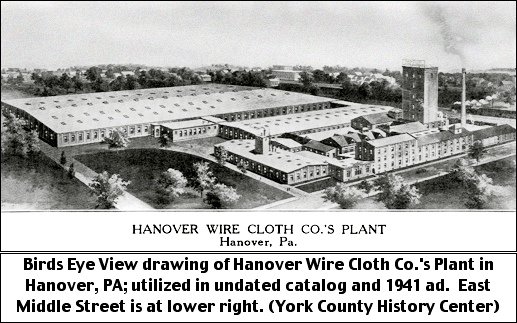 The Hanover Wire Cloth Company manufactured a highest priority pure nickel cloth for the ‘Manhattan Project.’ The fine mesh nickel cloth was produced from January to June of 1945; for that and for other necessary war materials throughout the war, they are listed among the nineteen York County war production plants granted the Army-Navy “E” Award during World War II.

Why did Hanover Wire Cloth receive this award more than one month after World War II ended? This posts examines the details.

On September 2, 1945, aboard the battleship Missouri, Japanese officials surrendered to representatives of the Allied powers; thus formally ending World War II. The previous months had seen a dramatic shift in the forecast that the war could drag on for at least another year.

The strategy for a November planned Allied invasion of mainland Japan was solidified in the summer of 1945. That invasion carried an anticipation of fierce resistance and the projected losses of one million men. The prognosis of those massive losses figured into the decision by President Truman to use the atomic bomb.

On August 6th, the uranium bomb was dropped on Hiroshima. President Truman called on Japan to surrender, in order to avoid even deadlier bombs. No response resulted in the August 9th bombing of Nagasaki with the plutonium bomb. With that bombing, Japan immediately began to offer various forms of conditional surrender, before finally agreeing to unconditional surrender.

With the atomic bomb no longer one of the most guarded secret projects during World War II, the ‘Manhattan Project’ label is revealed in a new light for those plants supplying materials for the project. Such was the case for the Hanover Wire Cloth Company.

An article in the August 10, 1945 issue of The Evening Sun (Hanover, PA) reported Hanover Wire Cloth Company worked on materials for the ‘Manhattan Project’ from January to June. The material was a fine mesh screen cloth made from pure nickel. The orders for that material carried the highest priority rating for labor and materials; however there was no way of knowing its use, except that it was labeled for the ‘Manhattan Project.’ Quoting the close of the article: “With the blasting of two Japanese cities from the map this week, the world learned what the ‘Manhattan Project’ meant and Hanover’s wire cloth workers discovered the part they had played in the arrival of the age of atomic force.”

Before the war, the Hanover Wire Cloth Company had expertise working with pure nickel wire and with nickel-plated steel wire; possibly why they got the job. On the largest ‘Manhattan Project’ orders, they were permitted to subcontract, under their supervision, some of the production steps to the neighboring Keystone Wire Cloth Company; located at 140 Factory Street.

The “E” Award is for Excellence in Production; it was the highest honor given industry in recognition of outstanding production of necessary war materials. War production plants received nominations for Army-Navy “E” Awards from armed forces procurement officers and the like; i.e. those in the government closest in touch with production operations in the war material factories.

Nominations went to a Board of Production Awards, where the submissions were pared down. Those nominations holding the highest merit progressed through a gauntlet of statistical production evaluations. If all results satisfied the award requirements, the Army-Navy “E” Award was approved, the plant was notified and a public ceremony was planned about a month later.

The Boards of Production Awards met for the final time during August 1945. From those meetings the nominations judged to hold the highest merit were allowed to proceed through the final evaluation. The ceremonies presenting the final WWII Army-Navy “E” Awards occurred from late September through late October; i.e. after World War II ended.

On Monday afternoon, September 17, 1945, a letter was read to the men and women of the Hanover Wire Cloth Company; it had been received that day from the Under Secretary of War, Robert P. Patterson:

“This is to inform you that the Army and Navy are conferring upon you the Army-Navy production award for high achievement in producing materials needed for war.”

“The award consists of a flag to be flown above your plant and the lapel pin which every man and women in the plant may wear as a symbol of your great contribution to victory in this war for human liberty.”

“Your record of practical patriotism is high, your production effort outstanding, and you have served your country well in its fight against aggression.”

“A public presentation of the Army-Navy ‘E’ flag to the Hanover Wire Cloth Company and of the ‘E’ pins to the employees of the firm will be held at the plant at a later date.”

Army-Navy “E” Award card and pin is of the type presented each of the 249-employees of Hanover Wire Cloth Company during ceremonies on October 10, 1945; at the East Middle Street plant. A dinner for employees and guests followed. Quoting from the October 9, 1945, issue of The Evening Sun (Hanover, PA); reporting on the range of war production work conducted the plant:

“From the start of the war until V-J Day, the Hanover firm was engaged in war work. For a time it engaged in the assembling of temporary landing field mats, which were used first for the establishing of temporary air fields and were later used principally for beach landings.”

“When the demand for insect screening for both the Army and Navy became great, the Hanover Wire Cloth Company turned all of its efforts to the manufacture of this material. The Hanover firm also produced a fine mesh nickel screen cloth for the ‘Manhattan Project,’ which after the war was disclosed to be the project which produced the atom bomb.”

This birds-eye view of the Hanover Wire Cloth Company plant was used in a 1941 ad; the drawing is circa 1930s. East Middle Street is at the lower right. The plant still stands at 500 East Middle Street in Hanover, operating as IWM International; with IWM standing for Industrial Wire Mesh.

Hanover Wire Cloth Company was the last of the nineteen York County war production plants granted the Army-Navy “E” Award during World War II. The Naval Ordnance Plant in Springettsbury Township was number eighteen, receiving their award on August 28, 1945. Both are in the group of seven York County plants receiving the “E” Award, which are not located in York City.

The York Plan originated within the Manufacturer’s Association of York, Pennsylvania. At the start of the United States entry into WWII, this organization included 157-member businesses throughout York County. Membership grew during the war and even added a few businesses from Adams County.

Hanover Factories talk at the Mansion