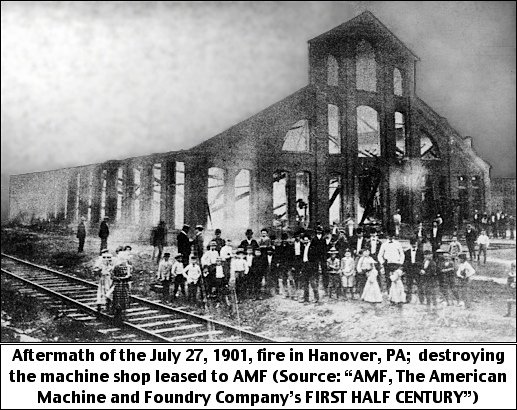 American Machine and Foundry Company’s first manufacturing plant was established during April 1900 in Hanover, York County, PA. AMF was organized March 26, 1900, and set up their offices in Brooklyn, NY. To rapidly start production, AMF leased the existing shops of Hanover Foundry & Machine Company; and retained much of their existing workforce.

The workforce had swelled to 215 men, when a July 27, 1901 fire destroyed the largest part of the plant; the machine shop. The photo shows the aftermath of the still smoldering fire Sunday morning July 28, 1901. The view is looking east while standing on Middle Street. In the lower left are Pennsylvania Railroad tracks. Traveling the tracks, heading off to the left, one passes through Spring Grove, and then York.

A plan view of the plant AMF leased is shown on a July, 1896, Sanborn Fire Insurance Map of Hanover, from Penn State Libraries. I’ve annotated the relevant map section with street and railroad names; plus added an arrow to represent the 1901 fire photo viewpoint. The fire destroyed practically everything between the main line of the Pennsylvania Railroad and the PRR Siding Spur. The foundry south of the siding spur was damaged, but not destroyed.

Following the fire at the Hanover plant of the American Machine and Foundry Company, the Gettysburg Compiler, issue of July 30, 1901, provided a short history of the plant: “The American Machine and Foundry Co., of which Messrs. Hanson Robinson, vice president, and T. M. Brown, treasurer, are the local representatives, leased the shops of the Hanover Foundry & Machine Co. in April, 1900, for a period of ten years, and have been making constant additions to the plant ever since. They were pressed with orders, and in the shops destroyed by fire, 215 men were employed. Cigarette and cheroot machines, tobacco packing machines and other high grade specialties were their product.”

The Board of Trade, of Hanover, offered inducements to keep AMF as a local employer, including immediately starting construction of a temporary 40 by 150-feet machine shop, just east of the damaged foundry. Hanover planned to fix the foundry quickly by filling it with a leased foundry, pending a decision by AMF.

The York Daily of September 12, 1901 reported on the details, “The subscriptions to the stock of the new foundry company of Hanover are very encouraging, and render it certain the success will crown the effort. The Glenville foundry has been leased and operations will be begun there at once and continued pending the decision of the question whether or not the American Machine and Foundry Company will continue their plant in Hanover.”

Prospects of retaining the AMF plant in Hanover waffled back and forth, until ultimately the January 1902 decision was: “the American Machine and Foundry Company, of Hanover, will remove to Brooklyn, N. Y.” AMF acquired an existing Brooklyn factory and ads soon started to appear in New York newspapers for machine operators to work at their new 346 Carroll Street plant; located near the offices of American Machine and Foundry Company. The Milling Department, in about 1905, is shown within the first AMF plant in Brooklyn.

Following the decision that AMF manufacturing would leave for Brooklyn, the foundry and machine shops that were being prepared to induce American Machine and Foundry Company to stay, were utilized in establishing a new Hanover business. The York Daily of February 4, 1902 reported: “A charter for the American Foundry and Machine Company, of Hanover, with a capital of $100,000, has been granted by the state department. The directors are Thomas M. Brown, H. N. Gitt, J. H. Bittenger, David McG. Newcomer, C. J. Delone and Andrew B. Brodbeck.”

The following Bing.com aerial view is used to indicate where American Machine and Foundry Company’s first manufacturing plant was established during April 1900 in Hanover, York County, PA; that location is indicated by an arrow, placed at the upper right. The square in Hanover is at the lower left; at the intersection of Routes 94 and 194.

What was the American Machine and Foundry Company?

The American Tobacco Company set up the American Machine and Foundry Company in 1900; using it to manufacture its tobacco and cigarette processing machinery. AMF worked closely with a subsidiary, the International Cigar Machinery Company; which specialized in developing state-of-the-art automated machinery for the cigar industry. It was not until August 15, 1912, that the American Tobacco Company spun AMF off as an independent company.

In the decade prior to WWII, AMF started to diversify their product offerings; however making automatic machinery for the tobacco industry still remained their prime focus. In the 1930s, AMF began to purchase companies with expertise in developing and manufacturing machinery for the textile and baking industries.

Following WWII, AMF continued to diversify their product offering. The most well known product AMF developed following WWII was the automatic bowling pinsetter. By the time AMF returned to York County for the third time, they were operating 60 manufacturing and engineering facilities throughout the United States and 16 other countries.

On November 14th 1963, AMF was the winning bidder in acquiring the massive Naval Ordnance Plant in Springettsbury Township. American Machine & Foundry Company officially took over operation of the plant February 1st 1964. The following 1964 photo shows the newly placed AMF signage over the main entrance to the offices at the southwest corner of the plant.

American Machine and Foundry Company’s presence in York County came to an end in 1981, when a group of thirteen investors and executives within AMF joined forces to buy back the Harley-Davidson product line, plus the plant in Springettsbury Township. AMF had previously purchased the Harley-Davidson Motor Company in 1969.

The corporate entity AMF, originally founded as American Machine & Foundry Company in 1900, ceased to exist in 1985; after Ministar, Inc. purchased it in a hostile takeover. Ministar went about selling off the former AMF divisions. Nevertheless some of the parts of the former bowling products division continue to use the letters AMF as part of their logo and/or corporate name.