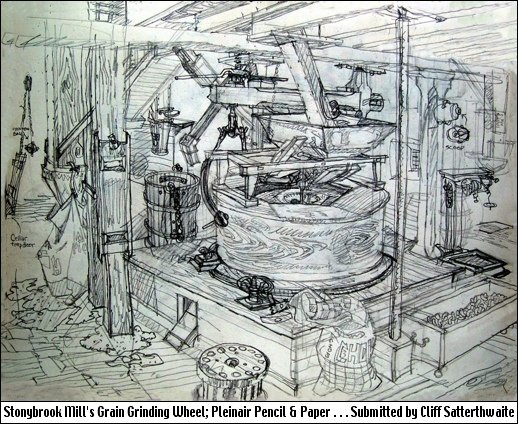 I’m continuing my look at the Stonybrook Mill and the artwork of Cliff Satterthwaite; here are the links to the previous parts 1 and 2. The Rev. Walter E. Garrett, Pastor of the Kreutz Creek Charge of the Reformed Church in York County, visited this mill building in the early 1930s and recorded the names and dates written on the walls and posts inside the upper floors of the Stonybrook Mill. The Pastor also provided family connections associated with those names. This post focuses on those names on the walls, along with some neat interior artwork, generously provided by Cliff Satterthwaite.

Cliff’s artwork was done in 1966, the same year that I had a chance to explore the inside of this mill. I remember things inside the mill as if they were suspended in time. Based upon the research by Grant Voaden (see part 2), the mill equipment had likely sat idle for at least 20-years by 1966.

Cliff’s pleinair pencil & paper artwork of the grain grinding wheel and surrounding Stonybrook Mill equipment exquisitely captures the core workings of any Grist Mill. I’ll focus on specific details of that artwork later in this post.

Rev. Garrett liked to include local historical articles in his church newsletters. The Pastor had a recurring column, “Tales Of The Long Ago” and in this case “37. Hiestand’s Mill;” a column that appeared in his July, 1931 newsletter. Grant Voaden, made the discovery of this column and had a copy in his research papers. The article begins:

Hiestand’s Mill is situated at Stony Brook, on the road leading off from the Lincoln Highway to the south. Passing the Lower Mennonite Church and the School House, the mill can be seen to your right [see my post on the Stony Brook School House at this link]. The mill-race and the dam have fallen into ruin and are only a shadow of what they were in their days of activity.

No one knows when or by whom the mill was built. But it is over a century old. This we know because one name written on the wall of the fourth floor is as follows:

This is written in red and has remained there all these years undisturbed. This date then must be a guide as to the building of the mill. Who built it or when it was built remain unanswered up to the present time.

Some years ago the writer [the Pastor] copied all the names that still can be read which are found on the walls and posts.

Through extensive examination of deeds and tax records, Grant Voaden was fairly certain the Grist Mill was built about 1811 by Christian Hammacher. Hammacher’s Mill becomes Hiestand’s Mill following the 1826 acquisition by Abraham Hiestand. Hiestand owned the mill for more than 30-years. The name George H. Strickler and year 1829, might signify he was an employee or a customer at the time his name got inscribed on the upper-most floor of the mill.

The following is an alphabetized list of names that were written on the posts and walls of the Stonybrook Mill. This was a mill know to Rev. Garrett as Hiestand’s Mill in 1931, when the owners were Hieston & Annie Throne. The names, in this list, represent the whole gambit of owners, employees and customers:

These names were on the upper floors of Stonybrook Mill.

Before I provide the text of the article written by Rev. Garrett, we’ll take that up-close look at Cliff Satterthwaite’s artwork of the grain grinding wheel, which was on the second floor of Stonybrook Mill. I’m sure my readers are just as impressed, as I am, at the attention to detail. 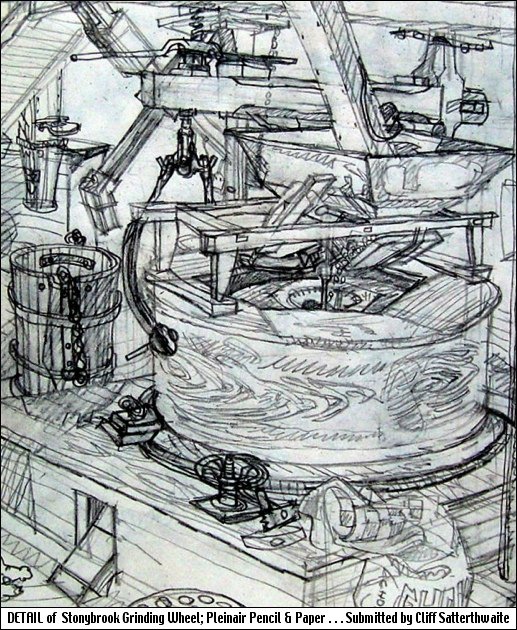 Starting at the top of Cliff’s artwork is the millstone crane mechanism. This allowed a Miller to hook onto the sides of the heavy top millstone, then use the mechanical advantage of the iron screw to lift and flip over the millstone for cleaning.

Next in sequence from the top of the artwork is the hopper, which holds the grain to be ground. The chair supports the hopper. The shoe is below the hopper; it controls the flow rate of grain leaving the hopper. Talk about detail; look closely, you can see the grain dropping off the shoe.

The shoe also guides the grain into the center opening of the top millstone; this is the stone that is rotating, via waterpower in the olden times. The bottom millstone, or bedstone, is stationary.

The millstones do not touch; they are a very small distance from one another. The furrows in the face of the bedstone are in opposite direction to the furrows in the top millstone, which forces the grain from the center to the outside edge of the gap between the stones; all the while the furrows interact with a scissoring action to cut the grain into smaller and smaller pieces.

The wooden cap is positioned to allow a nice-sized gap between the cap and the sides of the millstones and sits above the upper surface of the top millstone. The cap guides the ground grain to the chute. The ground grain flows inside the chute, in the lower left, to be sifted on the first floor.

The following pleinair pencil & paper artwork of Cliff Satterthwaite illustrates the Stonybrook Mill sifter, which sat on the first floor. Look at the detail of the wooden pulleys on the line shaft in the upper left. Back in the olden days, when waterpower operated the mill, this line shaft would have rotated via waterpower and leather drive belts would have stretched from the wooden pulleys to power equipment; such as this sifter. 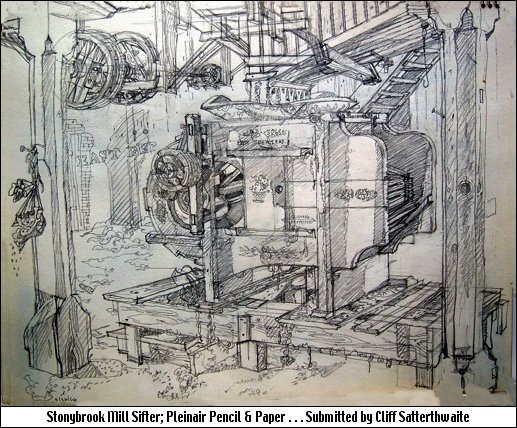 This artwork also shows the eight-sided posts in the mill. That is something that I distinctly remember about Stonybrook Mill and wondered why such detail work was done inside a working mill. It does add attractive character to the internal surroundings. Comment if you know of other mills with similar eight-sided posts.

Grant Voaden’s notes indicate the mill and all its contents were razed in the first half of 1972. I was away at college, at the time, otherwise I might have tried to save some things. The only items saved, appeared to be some bricks, used to build a patio at the home of John Buchart, near Strickler’s School. At least we have the artwork of Cliff Satterthwaite to visually remember this lost piece of Americana, know as Stonybrook Mill.

Rev. Garrett noted that he was indebted to Jacob H. Yinger, the blacksmith of Hellam, and his wife, for the information concerning the names written in Stonybrook Mill. “The Yingers lived for a considerable portion of their early lives at Stony Brook, and were well acquainted with some of the men whose names are written on the walls of the old Hiestand Mill.”

Continue reading for the text of the article written by Rev. Garrett:

Rev. Garrett noted no names were found on the walls or posts of the first floor of old Hiestand Mill. He also recorded the names when the mill had an additional floor, as told to Grant Voaden by mill owner Hieston Throne in 1945. What follows is the text of the Pastor’s article describing the names on the walls of Stonybrook (Hiestand’s) Mill; along with the family connections associated with those names.”

On the second floor a large number of names were found. Some are legible; others have faded out in whole or in part and cannot be deciphered. We will give these names and a brief comment on them as we pass, as a result of our interview with the Yingers.

The first name we see is Henry Heindel, who married Ambrose Miller’s sister. He was the son of Peter Heindel, and a father-in-law to Joseph Bisker. He was Elmer Heindel’s uncle and had a brother, Edward, who lived in the upper house on Elmer Heindel’s farm.

Another name is W. L. Mundis, who was both miller and mill-wright. He had a shop in Eila (Owl) Valley at Fakestown and ran the mill there for a time. He had a brother, Isaac, who was married to a Hertzler, who lived opposite Millard Winter’s home, near Yorkana, in the house now owned by John Glatfelter. He was the father of Mrs. John Howard. After the Mundis name is seen, “Stony Brook, 1885.”

Then comes Jacob Fried, who lived on Stony Ridge and was a Veterinarian.

The names of W. Ryan and O. B. Dietz are also seen. This ends the list on the walls of the second floor.

Now we come to the third floor. On the first post to the southwest appears the following: “Michael C. Wambaugh, Miller, was born November th16, AD 1802.”

Abraham Hiestand’s brother, Henry, lived on the Mt. Zion Road, near the Railroad Bridge. In the same house, George Throne’s widow, Annie, a daughter of William Hiestand, lived also. He was a “master tinker” and cabinet maker; mended tinware; and was a cooper; in fact, filled a place of all round usefulness for the whole community. We would call him today a skilled artisan.

Of course everybody knows of Abraham Hiestand, the miller, who built what is now Sprenkle’s Mill, in Hallam, about 1832. Whether this name is that Abraham, for there were several of that name, we cannot say.

On the second post is found “Oliver B. Dietz, Miller, 1881.” This man was the son of George Dietz and had a brother also by the name of George, who lately passed away and was the Miller, for many years, at Dietz’s Mill near Wrightsville, on the site of the first mill in York County, built in 1735. His father was a brother to William H. Dietz’s father, of Trinity, also a William.

On this same third floor appears: “Samuel Arnold, Miller, June 23, 1874.” This record of an old transaction also is preserved: “6 bush. of W. John Wilson.” This is the father of Miss Sallie Wilson, of Hallam.

These names are written on the plaster, which has no white coat, but has a smooth, yellowish finish.

Some facts given concerning the persons represented by these names follow: Wm. H. Spangler’s wife, the grandmother of Stewart Miller, of Hallam, was burned to death in boiling applebutter. Wm. Spangler had two other brothers who were millers, Daniel and Henry.

Wm. A. Hiestand bought the land formerly owned by the Hiestand sisters at Hiestand Station.

C. Ferree’s sister was the above-named Aunt Susan Dellinger and another of his sisters was Calvin Druck’s mother. His brother, Jacob, married Sarah Strickler’s daughter.

Now we come to the fourth or last floor, which yields the most important fact determining at least approximately the age of the mill. There are many calculations seen on this floor. Here is seen the oldest signature, as follows: “George H. Strickler, A. D. 1829.” In red. Also “Jacob Yinger 1867.” His namesake, the blacksmith, knows nothing of this man.

The posts are 8-sided with a section of 18 inches in height having four sides supporting the ceilings.

These old signatures are full of interest and bring back many of the men who lived about Kreutz Creek Valley. Their descendants will no doubt appreciate this little reminder of them dug up by the Pastor, which otherwise doubtlessly, never would have seen the light of day so far as our readers are concerned.