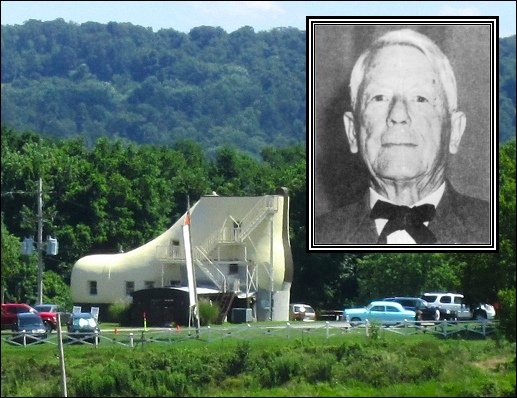 Mahlon Haines’ Wizard Ranch might be a great location for a disc golf course. My first encounter with the Shoe Wizard occurred during a Haines scouting safari at that ranch in June of 1960. That first encounter was just in passing, as Mahlon walked through our area at Wizard Ranch.

In the fall of 1961, Haines’ visited our farm along Old Dutch Lane in York Township; where I was captivated by nearly two hours of Haines talking about everything from redesigning the Springettsbury Township symbol to plans for his new estate, Churchill Downs. During both of those encounters, Haines’ appearance mirrors the inset photo; from the collections of the York County History Center.

The Haines Safari for scouts was initiated at Wizard Ranch in 1941. Several months following the 1960 Safari, Mahlon Haines donated Wizard Ranch to the York-Adams Area Council of the Boy Scouts of America. In the later years, these large Haines Safari gatherings were held every four years, as they continue to this day. More recently, between these big gatherings, the Wizard Ranch has seen limited use by the scouts.

Earlier in 2018, the Lancaster County Conservancy purchased the Wizard Ranch from the Scouts; while still allowing them to hold future Safaris, the occasional camping, plus eventually opening the land for public use.

After the Springettsbury Township Board of Supervisors meeting on August 23rd, I spoke with one of the disc golf organizers and suggested they consider the Wizard Ranch for a disc golf course. His questions about the terrain prompted me to use features in the York County Tax Assessment Property Viewer to provide the following elevation and aerial plots.

Mahlon Haines sold his Haines Acres Farm in 1954 to Abe Epstein. Epstein & Sons developed the farm into Haines Acres housing, fanning out from Haines Road in Springettsbury Township. Haines moved into “The Hermitage;” which he built along “Shoe House Road”, just east of The Shoe House in Hellam Township.

The following ad appeared in the April 22, 1961 issue of The Gazette and Daily. It is one of the few places I’ve discovered Haines’ Churchill Downs mentioned in print. The first line of the small print reads: “The Colonel [Mahlon N. Haines] says just as soon as the [Hermitage] house is sold, he will build on ‘Churchill Downs’ between Hellam and the river.”

Mahlon Haines first wife, June, died in 1951. In 1957, Haines’ second marriage was to Grace Marianne Churchill of London, England; whom he met on a cruise. She was 30-year younger than Haines and shared his interest in horses.

“Churchill Downs” was to be a new estate for Mr. & Mrs. Haines along Accomac Road, near the Wizard Ranch. Haines wanted an elaborate horse barn with a large attached enclosed riding arena; both climate-controlled. That is how my Dad, Harold L. Smith, came to know Mahlon; through Dad’s business Yorkaire Cooling and Heating Sales Company, at 1877 Whiteford Road in Springettsbury Township.

Our family had another connection to Mahlon Haines via animals for our farm. My Dad purchased a 27.5-acre farm along Old Dutch Lane, York Township, in the spring of 1961. By the summer of 1962, we had the old farmhouse fixed up and spent the summers of 1962, 1963, 1964 and 1965 “vacationing” at the farm. During those years I was between 13 and 16-years-old; with four siblings younger.

Mahlon Haines had a small flock of sheep that he used to keep the grass down behind “The Hermitage” and around The Shoe House. Dad’s RD3 Farm Journal shows on June 24, 1961, he purchased 11 sheep from Mahlon Haines for $225. We let the sheep multiply to flock of about 25; which adequately kept the grass down in the farm pasture. The following is Dad’s March 1962 photo from the barnyard looking towards the farmhouse.

In was on a Saturday afternoon during the fall of 1961 that Mahlon Haines stopped by our farm. Supposedly he wanted to check that we were taking good care of his sheep. One sheep appeared to be a pet of Haines, since the same one kept coming up to Mahlon to get a nose rub.

While standing at the fence shown, Haines conversation with Dad covered subjects such as: Churchill Downs, symbols used on his horse racing silks, redesigning the Springettsbury Township symbol, his racetrack behind Playland, big plans for his 100th birthday, and the joy of all his farms and ranches.

Haines was never able to buy the land where he wanted to build Churchill Downs before his untimely death on October 31, 1962; at 87-years-old. My Dad said Haines widow, Grace, took all of the completed plans along when she returned to England.