Haines Park was built by Mahlon Haines and was opened for harness races and running horse races in 1928. The half-mile track was located in the area of the present intersection of Northern Way and Eastern Boulevard in Springettsbury Township. Sections of that track remained visible into the 1970s.

Mr. Haines and some of his friends wanted to stage weekly horse races, however upon being turned down on using the track in the York Fairgrounds, Mahlon decided to built his own track in a corner of his Yorkshire Ranch.

Special Attractions and other uses of Haines Park

The opening of Haines Park was initially planned for June 23, 1928, however heavy rains that Saturday scuttled those plans. The grand opening became June 30, 1928. The York Riders and Drivers Association were sponsors of the programs of racing every Saturday afternoon. Mahlon N. Haines was president of that association. Charles W. Bailey was its vice-president. John Kelbaugh was its racing secretary and Roy Gilbert was its treasurer. The following ad for opening day appeared in The Evening News of Harrisburg. 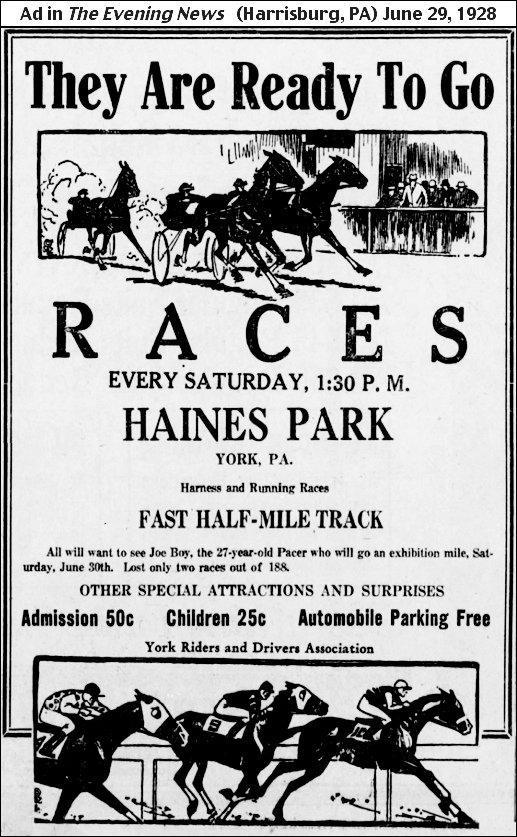 In the small print it is noted “All will want to see Joe Boy, the 27-year-old Pacer who will go an exhibition mile, Saturday, June 30th, Lost only two races out of 188.” Free parking was available for 3,000 automobiles. It was estimated that between 70 and 80 horses will be stabled at the track on Friday evening for the next day’s events. Horses from Hagerstown, Lancaster, Frederick, Hanover, Carlisle, Harrisburg, Gratz and some of the horses under training at the York Fair stables were entered.

Besides horse racing, Haines Park was utilized many additional ways. Mahlon Haines sponsored a Bronco Billie Rodeo at the park with all proceeds benefiting Springetts Fire Company. Haines Park was utilized by the Boy Scouts, amateur baseball league games, bicycle rodeos, and trapshooting events; including a statewide championship event in 1933. It seems Haines always had some sort of free give-away. For example, to start the 1937 racing season on Monday May 31st, a free ox-roast was given to the first six thousand people attending. Following WWII, Haines Park became the site of the York Horse Show.

Mahlon Haines purchased his initial farm in Springettsbury Township during 1917; he named those 199-acres, Haines Acres. Haines Park was located on his 318-acre Yorkshire Ranch; purchased during 1924. I’ve plotted the metes and bounds of Haines Acres and Yorkshire Ranch on a March 19, 1938 Historic Aerial Photo from Penn Pilot.

I’ve marked the half-mile oval of Haines Park in the northwestern corner of Yorkshire and it can also be seen in the distance on a 1940s photo in the post Mahlon Haines’ Yorkshire Ranch.

Traditional uses of Haines Park continued until 1953, thereafter it became the site of a trailer park. In the spring of 1963, I worked on a 7th grade science project with a guy who lived in that mobile home park. Half the time we’d work at his home and the other half at my home. I thought it was unique, the way the mobile homes’ surrounded the track with the big play-yard in the middle. The following May 30, 1964, Historic Aerial Photo from the York County Archives shows Haines Park when it was used as a trailer park.

The following August 11, 1971, Historic Aerial Photo from the York County Archives shows a few sections of the Haines Park track were still visible on that date. A Best Products store was built soon afterwards; located primarily on the infield of the former Haines Park. After Best Products closed, AAA moved their regional headquarters into that building.