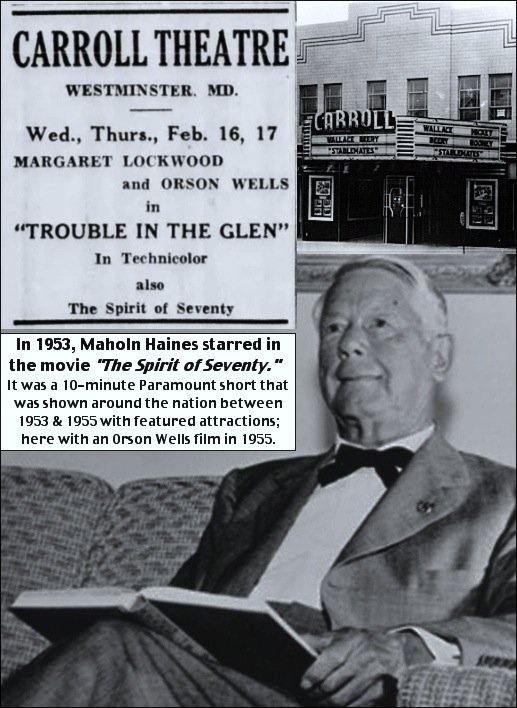 Mahlon Haines, of Shoe House fame, starred in a Paramount movie that was shown around the nation. The title of the 10-minute short is “The Spirit of Seventy.” It was shown prior to featured attractions between 1953 and 1955. In this 1955 Carroll Theatre ad, it was on the same bill as the Orson Wells film “Trouble in the Glen.”

Following a family history talk in Maryland, Jennifer Myers asked if I’d ever seen the movie starring the shoe house guy. That was the first I had ever heard about a Mahlon Haines movie.

Mahlon Haines supposedly would show up at theaters and would be allowed to give a personal introduction to the movie.

Mahlon N. Haines’ entry in “The National Cyclopedia of American Biography” contains the following sentence: “In 1953, he starred in a movie, ‘The Spirit of Seventy,’ which espoused the wisdom of physical exercise.” This movie is listed in the catalog of copyright entries for motion pictures: “The Spirit of Seventy” was copyrighted by Paramount Pictures Corporation on October 2, 1953. On a Turner Classic Movies message board it shows up as a 1953 short film, produced and directed by Herman Justin; whose shorts were usually 10-minues long, for Paramount Pacemaker.

I wonder if any 1950s local movie theatre audiences saw “The Spirit of Seventy” which included a personal introduction by Mahlon Haines. Actually the Carroll Theatre is not very far away; Westminster, Maryland, being only 35-miles southwest of the City of York.

Jennifer Myers provided a nice history of the Carroll Theatre. The theatre opened in 1937 and was used as a movie theatre until it closed in 1988; unable to compete with a Regal Cinema 6, which opened nearby. Whereupon the building was used sporadically, however always severely neglected. The City of Westminster purchased it in 2000; with the intensions of demolishing the Carroll Theatre to create a parking lot. A group of vocal citizens convinced the city there were better alternatives. Under the leadership of the Carroll County Arts Council the building was restored as a community arts center and opened in 2003. The building now serves the community as a home for gallery exhibits, drama productions, concerts, movies and classes.