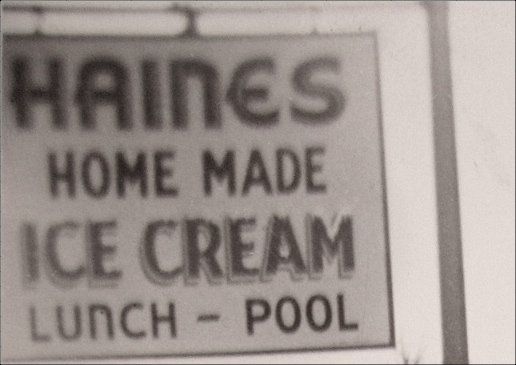 The mystery of Haines Home Made Ice Cream

The York County location of the Haines Home Made Ice Cream shop was a family history mystery to Joyce Evans. She initially suspected the site, in question, was the Haines Shoe House; however upon the recent discovery of a photo, the location reverted to mystery status.

Joyce was fortunate that her Mom wrote letters to her children chronicling events in her life. The letters were discovered, after the death of her parents. From the letters, Joyce provided a condensed history of how her Mom and Dad first met.

“Mom always lived in Columbia and Dad moved there after the war. However they first met just across the river. Mom and her friends were big fans of Haines home made Orange-Pineapple Ice Cream. Dad and his friends had a circuit of pool halls they regularly frequented. My parents first met at Haines Ice Cream shop, which had a pool hall in the back; and had their first date that evening in Columbia.”

Joyce, and her siblings, wished they had seen the letters prior to the death of their parents. As such, they worked at discovering additional facets to the letters. The Haines Shoe House was always the front-runner for the location where their parents first met, although with much doubt, owing to “pool hall in the back” description.

Last week, Joyce’s brother discovered the following photo; which was tucked in the jacket of one of their Dad’s books. The sign certainly fits the description of where their parents met, and the cars appear old enough; i.e. from before the family move to Michigan in 1953.

I thought that photo could be from any small town in York County. I did a Newspapers.com search using various combinations of the words on the sign, and discovered the following ad within the June 14, 1957 issue of The Dispatch:

The next step was an Census search using Ancestry.com: The 1940 United States Census for East Prospect Borough in York County, Pennsylvania contains the following entry for Nelson E. Haines, who is among the residents living on West Maple Street. Per Enumeration district 67-17; enumerated April 16, 1940, on Sheet No. 5A, Line No. 34: Nelson E. Haines is 49 year-old head of a household; containing his 45-year-old wife Velma N. Haines, their 18-year-old son Burnell G. Haines, and his 18-year-old wife June V. Haines. Nelson Haines is listed as proprietor of a Pool Room and son Burnell Haines also works there. Velma Haines is a Hand Roller at a Cigar Factory. In the 1930 Census, the occupation of Nelson E. Haines is Baker in East Prospect.

Joyce Evans is especially interested in comments from fans of Haines home made Orange-Pineapple Ice Cream and any interior photos of the place, when it was a combination ice cream shop, lunch room and pool hall.

Links to a few other East Prospect related posts include:

The 30 Founders of East Prospect; Pinpointing Where They Lived

East Prospect … named for the fine view of the surrounding country