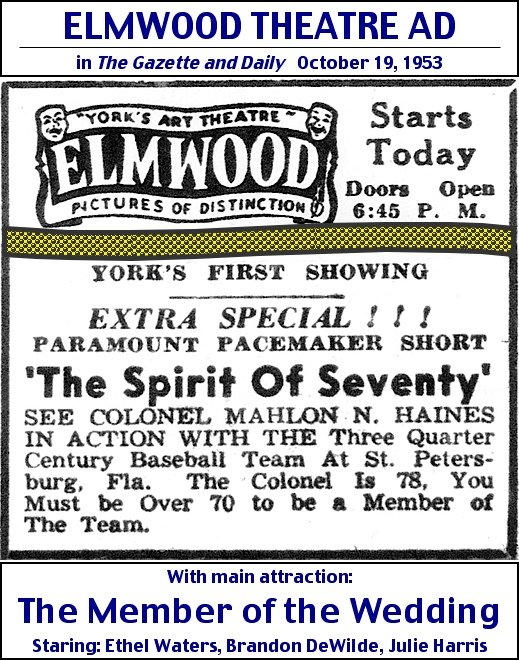 Bill Hoffmeyer shared he saw the Paramount movie which starred Mahlon Haines at the Elmwood Theatre (now the Belmont Theatre) back in the 50s. Bill wrote, “I still remember Mr. Haines jogging down the aisle to introduce the short movie.”

Mahlon Haines, of Shoe House fame, starred in a Paramount movie that was shown around the nation. The title of the 10-minute short is “The Spirit of Seventy.” It was shown prior to featured attractions between 1953 and 1955.

Mahlon N. Haines’ entry in “The National Cyclopedia of American Biography” contains the following sentence: “In 1953, he starred in a movie, ‘The Spirit of Seventy,’ which espoused the wisdom of physical exercise.” This movie is listed in the catalog of copyright entries for motion pictures: “The Spirit of Seventy” was copyrighted by Paramount Pictures Corporation on October 2, 1953. On a Turner Classic Movies message board it shows up as a 1953 short film, produced and directed by Herman Justin; whose shorts were usually 10-minues long, for Paramount Pacemaker.

I searched the newspaper microfilms at the York County History Center for an Elmwood Theatre ad after October 2, 1953. The illustration contains the top and bottom parts of such an ad from the October 19, 1953 issue of The Gazette and Daily. Click on this LINK for a Full View of the illustration in this post if details are cut off in the cropping of the illustration.

The Elmwood Theatre ad notes this about “The Spirit of Seventy” movie, “See Colonel Mahlon N. Haines in action with the Three Quarter Century Baseball Team at St. Petersburg, Fla. The Colonel is 78, you must be over 70 to be a member of the team.”

Haines maintained a winter home in Snell Isle, outside of St. Petersburg, Florida. Mahlon N. Haines’ entry in “The National Cyclopedia of American Biography” notes he was a founder of that Team. The early Teams had an average age of around 75-years-old, hence the name. Later the Team only included players over 75-years-old. It was a winter league amongst teams formed from these players.

Mahlon Haines was the home run king of the league for many years and he initially retired when he was 83-years-old; with a .593 batting average during his final year. However Haines announced, “If any 83-year-older exceeds that mark, he’ll return to the diamond.” At the age of 86, Haines was good on his word, coming out of retirement for a final year; that year attaining a .655 batting average. He attributed his success to staying physically fit and abstaining from alcohol and tobacco for his entire life.