Great Lakes Cruise on the Yorktown

My posts over the past two weeks were written weeks ago and were loaded to automatically appear each day within YorksPast.  The reason; I have just returned from a Great Lakes Cruise.

Occasionally over the next several weeks I’ll post about several things learned during this cruise that had a York County connection.  I may as well start with the most obvious connection; the name of the boat I was on, the Yorktown.

The Yorktown is American flagged.  It has an overall length of 257 feet and a draft of 9 feet.  On this cruise, that covered all five Great Lakes, there were 109 passengers.

The Yorktown is shown in the Welland Canal.  This canal is 28 miles long and contains a system of 8 locks, which allows boats to travel between Lake Erie and Lake Ontario.  The locks allow boats to be lowered (or lifted) over the Niagara Escarpment from Lake Erie to Lake Ontario, which is 326 feet lower in elevation.

The Five Great Lakes and their connecting channels form the largest fresh surface water system on the earth.  Lakes Superior, Michigan, Huron, Erie and Ontario hold approximately one-fifth of the world’s fresh water supply.  The following map shows the route of the cruise and the major shore excursion stops along the way. 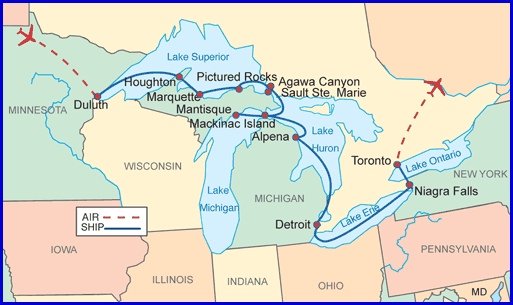 Earlier this month, I posted about a York County Connection to next months 200th Anniversary of Battle on Lake Erie.  I’ll expand upon that post in September.

Frederick Stonehouse, who has spent his life on and around the Great Lakes, was our cruise guide to the history and lore surrounding this region.  Fred has authored over 30 books on maritime history and is a consultant for numerous Great Lakes projects and programs.