Discover the Graveyard of earliest Spangler in York County 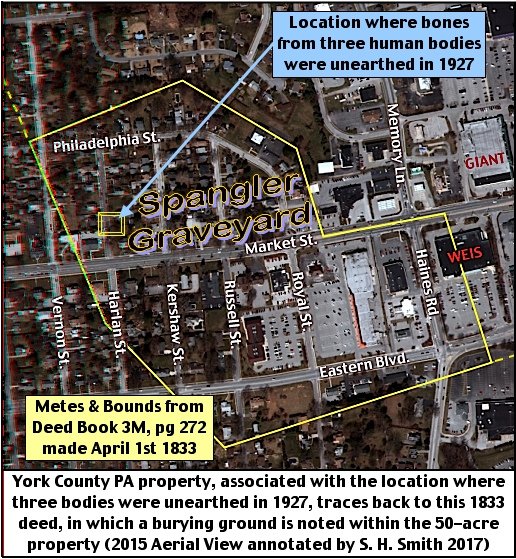 Caspar Spengler was the earliest Spangler to settle in York County, Pennsylvania; doing so in 1729 with his brothers Henry and Baltzer following in 1732.

In the search for the lost graveyard of Old East York, the burial ground location of Caspar Spengler was ascertained from information gathered via extensive property deed research conducted back to the 1700s; i.e. a complete deed search was made for the property where bones of three human bodies were dug up in 1927.

In the post, Digging up human bones in Springettsbury I explained this research was initiated via a comment in an oral history done for the Springettsbury Township Historic Preservation Committee in 2007. Long time Old East York resident Mrs. Arlene Dietz Imes noted when the Vern-Mar Apartments were built, human bones were unearthed and then re-interred in Mt. Rose Cemetery. Construction of the Vern-Mar Apartments commenced in 1936.

I shared the Vern-Mar story with the foremost graveyard authority in York County; Lila Fourhman-Shaull at the York County History Center. Someone had shared the 1927 article with Lila years earlier.

Combining the newspaper and oral history sources, my first thought was that an old graveyard straddled the present North Harlan Street; likely extending from 15 North Harlan Street to the northeast section of the Vern-Mar Apartments. Further research resulted in a slight modification to this supposition.

The June 24, 1927 article in The York Dispatch noted, “Two of the bodies were buried alongside each other, about three feet apart. There was found decayed wood indicating that the bodies had been interred in caskets.” The bones were discovered as a basement was being dug for a Harlan Street home being constructed for Carl Obermaier in the East York development of Springettsbury Township.

The land associated with Obermaier’s 15 North Harlan Street address traces back to an 1833 deed in which a burying ground is noted within the deed for the 50-acre property existing at that time. The metes & bounds from Deed Book 3M, page 272 are plotted over an associated 2015 aerial view. Click on this LINK for a Full View of the illustration in this post if details are cut off in the cropping of the illustration.

Quoting from deed 3M-272: “and reserved nevertheless a burying ground, lying in the last described tract (i.e. the 50-acre tract) containing about ten perches and the privilege of paying and respecting from the great road to and from the same, the fence whereof to be kept up by those who use claim and own the same.”

The 50-acres in the 1833 deed are located in the extreme southwestern corner of Caspar Spengler’s pioneering 385-acres, which he occupied in 1729 and which was warranted to him in 1736. This property was designated as being in York Township of Lancaster County, then York Township of York County; then renamed Spring Garden Township in 1821 and exists as Springettsbury Township since 1891.

Philip Caspar Spengler died in 1786. After some involvement by the courts, the survivors appointed the oldest son, Charles Spangler to sell the whole 385-acres. The whole property was sold to Elias Meyer in 1792.

Elias Meyer died in 1805, whereupon the whole property was divided in half; roughly along present day Memory Lane. The eldest son John Meyer received the eastern half and the other son Jacob Meyer received the western half, containing the graveyard.

In 1808, Jacob Meyer sells 50-acres at the southern end of his property to Thomas B. Neill. That 50-acres contained the burying ground. Thomas Neill died shortly thereafter, in 1808. Thomas’ Will left the estate to his son Lewis, who had died after his father’s will was written, but before the estate was settled. Thomas’s Will also stipulated that if Lewis was deceased, the children of Lewis had to be a certain age before the real estate could be sold.

The Heirs of Thomas Neill owned the property as a group until Thomas’ grandson George Bickham Neill was conveyed the 50-acre property containing the graveyard in 1832. In 1833, this property is among the parcels sold to Abraham Heistand; per Deed 3M-272, as noted and illustrated at the beginning of this post.

In 1856, the 50-acre property where the graveyard was located is among parcels sold by Abraham Heistand to Vincent K. Keesey per Deed 5F-233; which was a deed made in 1856, but not recorded until 1870. The note about the burying ground was not carried over from the 1833 deed and does not show up on future deeds. The Keesey Tract, that included the 50-acres plus other properties in East York, was sold to developer John H. Longstreet in 1903.

In 1896, Edward W. Spangler wrote an extensive family history of the early Spangler families in York County. The full title of his book is: “The Annals of the families of Caspar, Henry, Baltzer and George Spengler, who settled in York County respectively in 1729, 1732, 1732 and 1751.” Edward Spangler noted the following about the family graveyard on page 19:

“Caspar Spengler died in the year 1760, aged 76 years, and was buried in the private family graveyard, about eighty feet square, on his plantation one and a half miles east of York adjoining the ‘Great Road to Lancaster’ [i.e. today’s Route 462; East Market Street]. This burial ground was substantially enclosed, and had a fenced roadway thereto seventeen feet wide from the ‘Great Road’ for mourning trains to pass over to perform the last rites of sepulture. In it were also interred his wife Judith, his sons Bernhard, Philip Caspar and other members and descendants of the family, as well as the remains of a few immediate neighbors. Gravestones with the usual mortuary inscriptions marked this last resting place, so that subsequent generations could not err in locating their dust. Fifty years ago [i.e. in 1843] these memorial tablets were still standing. Today [i.e. in 1893] not a vestige remains.”

Based upon Edward Spangler’s assertion and the graveyard ownership history, it appears the elimination of all gravestones and removal of all evidence that this was a burial ground occurred in the decades when Vincent K. Keesey owned the property.

Edward Spangler noted the size of the Spangler Graveyard was 80-feet by 80-feet; a substantially sized private graveyard, i.e. big enough to accommodate up to 130 graves. I’ve shown that size via the double box within the illustration; i.e. straddling Harlan Street. The 1927 news account, regarding bones from three human bodies unearthed while digging the basement for a house at 15 North Harlan Street (east side of street), also reported human bones were found nearby three years earlier; such as in 1924 while constructing the house across the street at 16 North Harlan Street (west side of street).

The next post in this series will focus on the Spengler/Spangler, Meyer/Meyers, and Neill family members, plus close neighbors, that were potentially buried in the “Spangler Graveyard.”