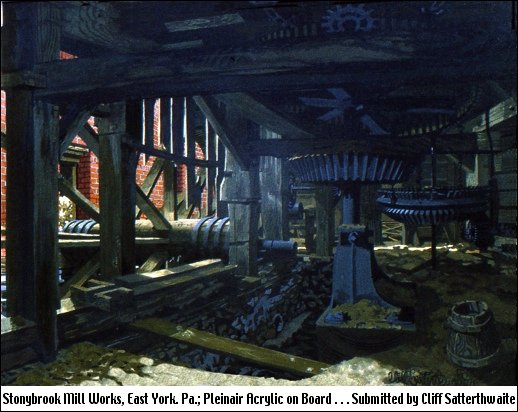 This post continues my look at the Stonybrook Mill and the artwork of Cliff Satterthwaite. Even before Grant Voaden retired as an Engineer with S. Morgan Smith Company, he was interested in water-powered mills; his Diary notes his first visit to Stonybrook Mill was on November 5, 1945. After Grant Voaden retired, his consuming interest was mills; when he set out to visit, research and document most of the nearly 360 mills which once operated along the waterways of York County. Since 1981, Voaden’s extensive research collection has been located in the Archives of York County Heritage Trust. The Stonybrook Mill research is in collection GV-18.

The pleinair acrylic on board artwork, provided by Cliff Satterthwaite, depicts the dark cellar of the Stonybrook Mill. The wooden shaft, banded with metal straps, of the great wooden water wheel is shown within the wheel-pit on the left side of the artwork. The Stonybrook Mill is unique; the overshot water wheel is inside the brick mill building. The remains of mill gearing, under the first floor, are shown on the right side. Cliff’s artwork was done in 1966, the same year that I had a chance to explore the inside of this mill.

Over their lifetime, virtually all mills had many names; a name usually associated with the owner at any particular time. Grant Voaden indexed this mill as Throne’s Mill; named after the last owners Hieston & Annie Throne. Voaden notes that Hiestand’s Mill is also a common name for this mill; that is the name in many historical accounts. When Cliff sought permission to draw the mill, the locals simply called this the Stonybrook Mill.

Through extensive examination of deeds and tax records, Grant Voaden was fairly certain the Grist Mill was built about 1811 by Christian Hammacher. Hammacher’s Mill becomes Hiestand’s Mill following the 1826 acquisition by Abraham Hiestand.

Upon the death of Abraham Hiestand, his will gives the mill to daughter Susan on February 3, 1860; at the time, Susan is the widow of Dr. Glatz. When I examined the 1860 U. S. Census, combined with Shearer’s 1860 Map of York County,  I noted Susan Glatz had Andrew and Henry Younker operating her mill in 1860. In 1870, Susan Glatz sells the mill to William A. Hiestand. In 1906, William’s sister Sarah Hiestand is willed the mill. The final purchase, as an operating mill, is by Hieston & Annie Throne, from the Estate of Sarah Hiestand in 1924.

Upon his many site visits, Grant Voaden photographed all the mills that were still standing. His photographs are also in the collections of the York County Heritage Trust. The following is my favorite photo of Stonybrook Mill, that Voaden took on April 24, 1949. Both Cliff and I believe that the wooden shed-like structure at the right side of the photo was no longer there in 1966. 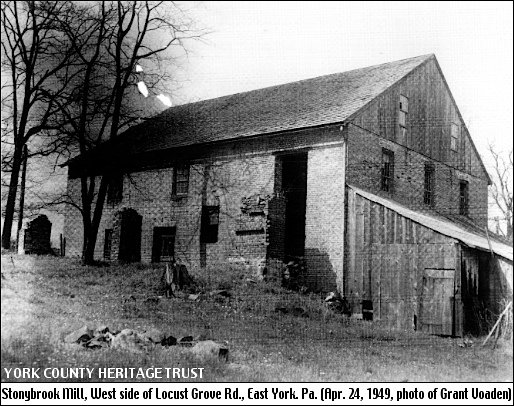 Hieston Throne told Grant Voaden, that at one time, the mill contained a full three and one-half stories. Hieston had memories of this mill back to when he was a kid; i.e. when his uncle William A. Hiestand owned the mill. Hieston Throne, also known as Hieth, was born in 1871 and died in 1963. I’ve added annotations to Voaden’s photograph to better describe additional details about Stonybrook Mill. 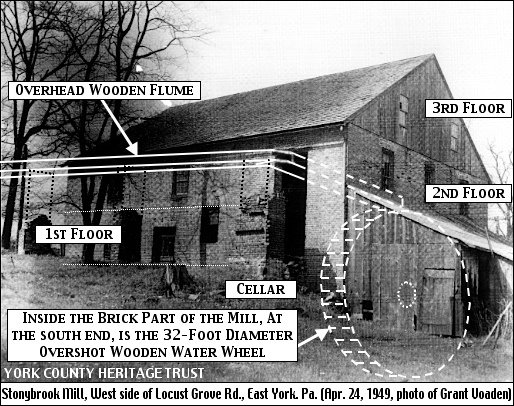 The artwork of Cliff Satterthwaite, at the beginning of this post, depicts the dark cellar of the Stonybrook Mill. Cliff’s view is in the Cellar, under the 1st Floor, and includes the great shaft of the wooden water wheel, sitting in the wheel-pit. The wheel-pit aligns with the two-story vertical opening in the west wall of the brick mill structure, thus lighting the water wheel in Cliff’s artwork.

Grant Voaden noted the 32-foot diameter, overshot, wooden, water wheel was fed by a race and an overhead wooden flume. I’ve drawn in the appropriate location of the flume. The brick columns, which have partly collapsed, would have supported the flume. A large brick column is located where the flume turns to enter the mill.

Voaden was told that the mill was last run by water-power about in 1920 by William Spangler, who was operating the mill for Sarah Hiestand. Thereafter and into the 1940s, a gas engine powered the mill.

After sitting idle, although protected inside the mill building for 46-years, the wooden water wheel was fairly well preserved, when Cliff Satterthwaite created the following artwork in 1966. I believe a piece of the wooden flume sits on the water wheel. Each time I look at this artwork, I’m astonished at the detail! 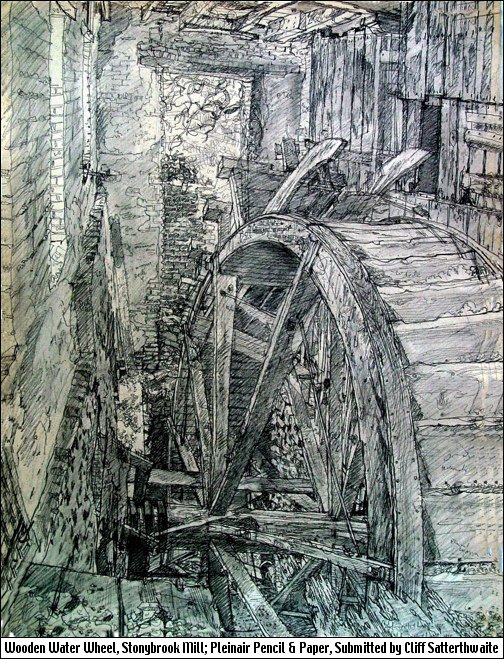 The view is looking down on the water wheel from the second floor level. The direction of the view is towards the large vertical opening in the west side of the building, and outside one can see the remains of the large brick column that supported the overhead wooden flume where it turned inside the mill.

A Pastor visited this mill building in the early 1930s and recorded the names and dates written on the posts inside the upper floors of the Stonybrook Mill. Check back on Wednesday as I post that information and also share some additional neat interior artwork, generously provided by Cliff Satterthwaite.