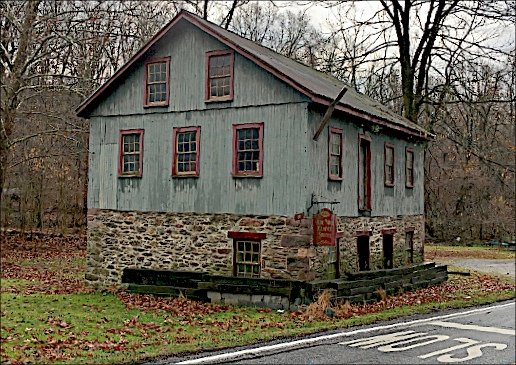 The rest of the story about Gotwalt’s Mill, at the S-curve in Camp Betty Washington Road, is told in this post. This mill is also referred to as Rider’s Mill and more commonly Bowser’s Cider Mill. The Olde Mill Cabinet Shoppe presently occupies this old mill structure in York Township.

A recent query on this mill, by Chuck Letocha, brought to the forefront items that have been on my research-to-do-list for several years. Karen Long asked if I could identify a commercial cider press business, somewhere along Camp Betty Washington Road, that her grandfather often utilized. That question was partially answered via a reference later noted by Jennifer Austin, when she inquired about an Austin family connection concerning this mill.

Jennifer referenced page 63 of the book, “York Township Celebrates 250 Years of History; A History of York Township 1753 – 2003;” from which she stated, “I’ve had absolutely zero luck tracking down anything about the mill owner described in that history—Martin Austin. It is as if he never lived in York County. Is it possible he was an absentee owner?” In response, I gave Jennifer some tips on tracking down where Martin Austin might have lived in other parts of Pennsylvania or in Maryland.

When Chuck Letocha inquired if mill owner Daniel Gotwalt could be his relative, I checked Lila Fourhman-Shaull’s book, “Millers’ Tales,” for the owners of Bowser’s Cider Mill. Page 114 notes the owners, in alphabetical order, as, “Martin Austin, Israel Bowser, Clair Meyers, Rider, and Ernest Yost.” Not seeing Daniel Gotwalt listed in either the township history or in Lila’s book; the next step was Grant Voaden’s mill research files, which he conducted from the 1950s through 1970s, and in 1981 he donated them to the Collection of the York County History Center.

The Voaden research file for this mill is # 143. Grant’s research method often began with interviews of mill owners and mill workers; and progressed to a thorough examination of tax records, deeds and wills to expand the range of his research, plus confirm or correct the oral history. This is one of the few mills that Grant Voaden never got a chance to go beyond the oral history phase.

In my family history and deed research for this mill, it is clear that Daniel Gotwalt was the original mill owner; which the people providing the oral history did not recollect. The individuals interviewed by Voaden also recalled some names incorrectly, which can now be corrected.

Daniel Gotwalt [1796-1886] was the son of Philip and Christiana (Wilt) Gotwalt. In 1819, Daniel married Susanna Rupp [1799-1877]. They had at least seven children: George, Samuel, David, Benjamin, John, Mary and Susanna. Daniel’s purchase of the researched mill site, during 1851, was done when he was a 54-year-old relatively wealthy farmer ($12,000 in real estate per the 1850 Census) in Spring Garden Township. At the time of the mill site purchase, Daniel’s five sons were between 15 and 28-years-old; they undoubtedly were involved in the construction of the mill, soon after the mill site was purchased.

On the following section of Shearer’s 1860 Map of York County, PA, a yellow arrow points to the location of Daniel Gotwalt’s Grist Mill. The mill is along south side of Camp Betty Washington Road; however with the way the S-curve is actually orientated, the mill is technically more to the east side of the road at that spot.

Likewise, Daniel Gotwalt’s Grist Mill, is shown on the following section of Beach Nichols 1876 Atlas of York Co., PA. The 1876 Atlas is significant for mill research, because it shows where many of the mill dams were located; and occasionally traces the paths of mill head and tail races. The atlas shows Gotwalt’s Mill dam extends almost to the edge of the road.

From the oral history collected by Grant Voaden, he notes; “Dam was originally at the mill but Highway Dept. moved the creek about 50-yds away from the mill and road.” Evidently with the creek and dam at the original location, the road either flooded or washed away on too many occasions.

In 1881, Samuel Rider [1836-1906] purchases the 13.5-acre mill property from Daniel Gotwalt (Deed Book 6V, Page 166). From the oral history collected by Grant Voaden, he notes a person named Rider utilized an overshot water wheel to power the grist mill and had two millstones set up inside; one run for flour and one for feed. Thus during the initial three decade ownership by Daniel Gotwalt, an overshot water wheel was likely utilized.

Newspaper searches revealed Samuel Rider also conducted a cigar box manufacturing business at this site; maybe in the mill, or possibly in another building. He supplied cigar boxes to several Yoe cigar manufacturers.

Possibly the initial Gotwalt Mill was a frame structure, which burnt down or was damaged due to a flood; and the present first floor stone, second floor frame, mill structure was constructed by Gotwalt in 1875. Samuel Rider may have remodeled the mill in 1895, potentially replacing the water wheel with a water turbine at that time, thus adding 1895 to the date stone. The water turbine was still in the mill, at the time of Grant Voaden’s visits.

In 1906, the mill property is purchased by Israel M. Bowser [1855-1937] from the Estate of Samuel Rider (Deed Book 15C, Page 407). Israel Bowser, a Dunkard Minister, utilized the mill to make cider; thus the mill is most commonly referred to as Bowser’s Cider Mill.

The oral history collected by Grant Voaden, notes the cider mill was last run by waterpower about 1919 and followed by gasoline engine and electric motor until 1951. I discovered the following notice placed in The Gazette of August 3, 1914: “I have installed a one hundred barrel cider press and gasoline engine and will make cider from Monday, at 2 p. m., until Friday evening. Israel M. Bowser, York R. F. D. No. 12, near Enterprise Station, M. & P. R. R.”

Israel Bowser operated Bower’s Cider Press business until the mid-1930s. Following his death on December 23, 1937, his Estate was settled when his daughter Carolyn, decided to buy the mill from her siblings and continue the cider press business. The 1938 purchase of the full 13.5-acre tract to Carrie M. Martin was finalized per Deed Book 27Z, Page 196.

Carolyn Marcella (Bowser) Martin was 13-years old when her father Israel M. Bowser purchased the former Gotwalt’s Mill in 1906. She often went by Carrie, even in legal documents, and was connected with the cider making business at mill property for 55-years.

In 1946, Ernest P. Yost and Elizabeth M. Yost, his wife, purchased 1.2-acres across from the mill; containing a dwelling house (Deed Book 31Y, Page 476). Ernest P. Yost is one of persons interviewed by Grant Voaden.

In 1961, Clair E. Myers purchases the final 3.2-acres, which Carrie M. Martin owned along Camp Betty Washington Road; it is the mill site (Deed Book 51L, Page 104). Clair E. Myers is another of the persons interviewed by Grant Voaden. Clair originally intended to make cider there again and have some kind of snack bar or restaurant, however the mill ended up being used for storage.

Carrie M. Martin lived her final years in southeastern section of York City at 610 Dallas Street. She died in 1965. The following 1948 photo of the mill is during the ownership of Carrie (Bowser) Martin when it was still operating as a cider mill.

The Olde Mill Cabinet Shoppe has occupied the 35-feet by 45-feet mill structure since the early 1980s. The first floor stonework was cleaned up and the overall mill was restored structurally. The following present viewpoint provides a direct comparison to the 1948 photo.

In 1982, Bess J. Naylor provided notice of a Fictitious Name business: OLDE MILL CABINET SHOPPE, with the business conducted at R.D. #3, Camp Betty Washington Road, York, PA. The character of the business was described as Reproducing Period Furniture in The Classic Tradition.

With the property around the mill owned by Carl and Bess Naylor, The Olde Mill Cabinet Shoppe opened in the fall of 1984. The business featured handcrafted furniture, woodworking tools & supplies, plus seminars. In 1987, the Naylor’s conducted the initial Colonial Day show at the mill. The show involved many costumed exhibitors demonstrating traditional 18th-century crafts; both in the mill and scattered around the walnut grove surrounding the mill. Here is the LINK to their present web site.