Such Good Food at the York Diner

Cliff Satterthwaite submitted this illustrated story about the various moves of the York Diner. The story was created in 1962, with Don Sternbergh, the owner of the York Diner; after the diner moved to its fourth location. Each panel represents one of those locations.

The York Diner was located at 37-39 North George Street in Downtown York from 1939 to 1949. That address was one-half way between Philadelphia Street and Clark Avenue; therefore today the steps, front doors and lobby of the York County Judicial Center approximately occupy the same space where the diner sat.

The second panel shows the York Diner on East Market Street, near Memory Lane in Springettsbury Township. The York Diner was physically split into three sections and moved there during 1949, because the owner of the lot on North George Street decided he could make more money by turning it into a parking lot. Today, the Giant Gas Station on the corner of Market Street and Memory Lane occupies the second location of the York Diner.

The third panel shows the York Diner further east on Market Street. The diner was physically moved in 1960 just east of The Barn that sat about where the Home Depot building is now located. This move occurred because the realignment of Memory Lane, so that it crossed Market Street directly opposite Haines Road, resulted in the loss of much of the diner parking lot.

The fourth panel shows the York Diner at the fourth location and under the new name York Dutch Restaurant. This move in 1962 resulted from the construction of McCrory’s Distribution Warehouse. The diner was in poor condition to physically make another move and was demolished. A house at 2810 East Market Street, adjacent to the east side of Playland, was remodeled so Don Sternbergh could continue to serve “Such Good Food.” That fourth location is now the site of the Advance Auto Parts (previously Western Auto) store on East Market Street.

Continue reading for a photo and details of the York Diner in Downtown York.

The opening of the York Diner was reported in the Wednesday April 19, 1939, issue of The Gazette and Daily:

The “York Diner,” located at 37 North George Street, was officially opened yesterday morning after an “open house” celebration Monday evening at which several hundred guests were served with free coffee and doughnuts. David and Donald Sternbergh, of Reading, are partners of the new “diner” type restaurant.

The new restaurant has seating capacity for 59 persons and a staff of 19 in the dining room and kitchen. It will be open for business 24 hours a day, every day in the year except Christmas, the owners announced yesterday.

The photo of the York Diner in Downtown York is from the collections of the York County Heritage Trust. 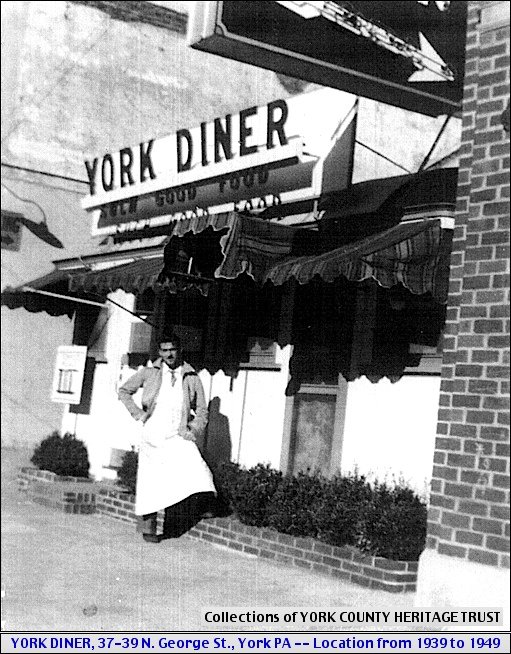 The York Diner did a nice business; as reported in the Thursday April 18, 1940, issue of The Gazette and Daily:

The York Diner, 39 North George Street, will mark its first anniversary today. The diner, first of its kind to be started in this locality, was opened a year ago today. Don Sternbergh, 136 East Market Street, is the manager. He reports 100,000 customers were served in the first year.

Future posts will examine the three other locations of the York Diner in greater detail.