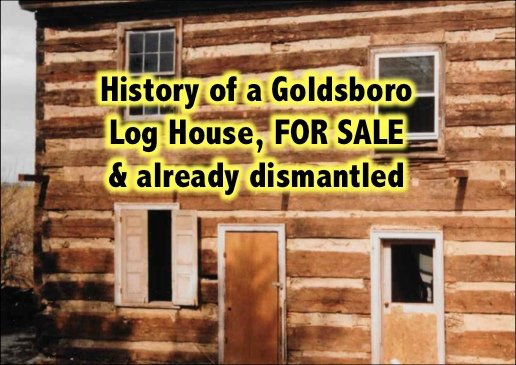 Exterior of log house, when located in Goldsboro, York Co., PA. It was carefully dismantled about 25-years ago and stored in a barn. The log house pieces are now for sale, with the hope it stays in York County.
Posted by Stephen H. SmithFebruary 3, 2021 All Posts, Buildings, Businesses, Family Histories, Mill, Pennsylvania, Roads, Susquehanna River, Various Locations, York County

A log house in Goldsboro was carefully dismantled about 25-years ago and stored in a barn. The owners of the dismantled log house for the past 13-years, Ted Pesano and his wife, were planning to reassemble the house as their residence, however circumstances have changed. The marked pieces and drawings, for reassembly, are now for sale. Their hope is that the log house can stay in York County.

Several large farms were included within the boundaries of Goldsboro when it was incorporated as a York County borough on August 23, 1864. The northernmost farm contained about 79-acres. The log house was located on that farm.

The following 1971 and 1999 aerial photos, of the northern part of Goldsboro, focus on that 79-acre farm. Through 1988, that acreage functioned as a farm; with the building locations annotated on the 1971 aerial photo. In 1988, Shelley’s Riverview, Inc. was granted approval to develop the farm. By the time the development was finished in 1997, Goldsboro contained 175 new homes. The 1824 barn still stands, however the log house at that farm was dismantled and other outbuildings were razed to build the last few homes in the development.

The still standing stone barn contains a tablet indicating “Built by Daniel & Magdalene Shelley – 1824.” This barn likely replaced an earlier barn on the property. The two-story log house contains hand-hewn logs and dates from the late 1700s to early 1800s. Further research is required to determine the earlier occupants of the log house, however in all likelihood the family of Daniel and Magdalene Shelley occupied the house in 1824.

Shearer’s 1860 Map of York County, while referencing the 1860 Census, places the occupant of the log house as Jacob Kister. Likewise, Beach Nichols 1876 Atlas of York County, coupled with the 1870 and 1880 Census, has Isaac Frazer the owner of the 79-acre farm.

George Prowell’s 1907 History of York County (Vol. 1, pg. 883) has this to say about Isaac Frazer: “The development of Goldsboro owed its prosperity to Isaac Frazer, who had conducted a store at his birthplace near Lewisberry in his early manhood. Soon after Dr. Small had laid out the town, Mr. Frazer purchased a lot and built a house, and in 1850 engaged in the mercantile business with his brother-in-law, Washington Kister. In 1851 he built a warehouse along the railroad and began buying grain and produce. In 1853, in partnership with his father-in-law, Rev. Jacob G. Kister, he erected the Goldsboro saw-mill, which he successfully operated for more than a quarter of a century. P. A. & S. Small erected a mill in the lower end of the borough. Mr. Frazer purchased this mill in 1873 and operated it until it burned down in 1886. He brought rafts up the Susquehanna, had them floated down the stream and sawed the logs into lumber at his Goldsboro mills, employing from thirty to fifty workmen for a period of over thirty years.” Isaac Frazer was born May 13, 1820, was married to Susan Kister on March 9, 1848 and died in June of 1900.

The log house stood approximately 35-feet side-to-side by 29-feet front-to-back. As it was dismantled about 25-years ago, all logs, rafters, flooring were marked and noted on drawings. They also have all fireplace surrounds, mantels, chimney cupboards, etc.

Ted Pesano indicated Sam McKinney, Director of Buildings and Grounds for the Northern York County Historical and Preservation Society, has viewed this building and commented it is one of the best he has ever seen. The asking price is $30,000 for the marked pieces and drawings for reassembly of this log house. The hope is that the log house can stay in York County.