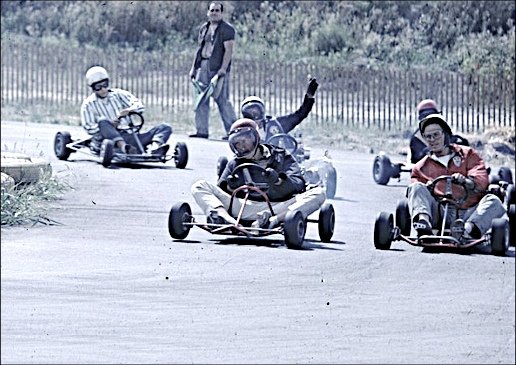 Glenn’s recollections about the go-kart track behind Wagner’s Diner east of Hallam: “This was the go-to place for many go-kart racers in York County. In the 60s, these racers were typically older individuals; high-school boys through young fathers. John and Louise Wagner started Wagner’s Diner after the war, and as the go-kart craze hit York County, they decided to allow several individuals, interested in karting, to create a crude go-kart track behind their Diner. It was not long before several of the regular riders were allowed to use a storage shed at the track, which blossomed into the site of a used go-kart lot. Quickly that lot expanded into an actual business, including new go-kart sales. The business and track become very popular and drew increased business to the Diner; kids wanted to go there, they ate their meals fast, always in a hurry to go outside and watch the go-karts going around the track. A fine paved track surface was constructed at the start of the second year; nice for the racers but really done to cut down on the dust stirred up from the original surface. About 30-years ago, Wagner’s was reopened as the present Red Rose Restaurant.”

The Vintage Aerial site displays aerial photos from around the country. Locally, they claim it contains aerial photos from about 1697 rolls of 35-mm film shot over York County at low altitude. Their web site states that amounts to about 61,092 York County photos. To a large part, the photos are of rural farms and rural businesses; photographed during the mid-1960s and mid-1980s.

I first used the Vintage Aerial site years ago to obtain an aerial photo of a farm that our family summered at a few years in the 1960s. At that time, little of their photo database was searchable. Now, only a few years later, they claim 54% of their collection for York County is searchable; because the way they have the site set up, the viewers of the site are viewing and identifying the locations of the aerial photos. Viewers get points and bragging rights for all the photos they identify, add comments, or provide history about the photos.

The way the Vintage Aerial site is set up, it provides better exposure for selling the photos; since people that want to buy a photo, are more likely to do so, if they can quickly find their specific photo. I suggested that might be an idea the York County History Center use for indexing the many unidentified photos within the very large recently donated David Allen Aerial Photo Collection.

The 1963 Kart Kourse photo was easily located, because within the Vintage Aerial site, John Swayze identified the photo in 2017. Surrounding features are consistent with present surroundings of the Red Rose Restaurant & Lounge. One should remember that many Vintage Aerial photos are identified per present use or owners; while fewer photos contain original use descriptions. To locate this specific Kart Kourse photo, go to the Vintage Aerial site, at this link, https://vintageaerial.com/photos/pennsylvania/york , then in the Search Keywords box, type: Red Rose Restaurant.

Glenn Ritter recollections continue: “The reason go-kart racers liked the Wagner’s Diner track so much was the kart shop. The racer could buy used racing go-karts, as those with money continually traded-in their old models for the latest and greatest racing go-kart models. A wide selection of high performance racing go-karts, were always available at this kart shop. It was always fun to test drive the latest go-kart models that came in; however one had to act fast, before they were snatched up.”

The following Kart Shop ad in The York Dispatch of April 7, 1961; provides some of karting equipment sold at The Kart Shop, Hellam R. D. 1, on Lincoln Highway East. The date of this ad is several months prior to the original crude Kart Kourse surface being upgraded to a fine paved track surface.

Tim Ritter noted the only new racing go-kart his dad ever owned was a McCulloch kart, although he did install an upgraded McCulloch engine once. Actor Don Knotts was a national spokesman for McCulloch Go-Karts in the early 1960s. Tim discovered a YouTube video of a Knotts’ 10-minute promotional movie for McCulloch, made in 1961. When he showed it to his dad, Glenn recalled a projector being set-up to show that exact promotional film at The Kart Shop.

Glenn Ritter noted: “I raced both of my used go-karts and my McCulloch Go-Kart locally at a track above York Haven and at a track above Thomasville. Occasionally I entered races in Dauphin, Lancaster and Chester Counties. My best showings were a single second place and two third places; all in my McCulloch.”

The go-kart track above York Haven is most likely the one know as the Circle-C Go-Kart Track. That track was located between York Haven and Newberrytown.

Glenn Ritter commented: “Once you’ve run racing go-karts, recreational go-karting is boring. Besides those operations are primarily set up for kids on speed-limited go-karts. The only recreational go-kart track I drove on was located on Roosevelt Avenue, next to Freddie’s Drive-In; it was on a dare by a co-worker. I won that snail race!”

The following ad in The Gazette and Daily of April 13, 1962; provides Grand Opening details for the Sunset Strip Go-Kart Track at 1100 Roosevelt Ave., Ext., York, PA. Cost is 25-cents for 3-minutes during off-hours and 50-cents for 4-minutes after 5 P.M. and all day Saturday, Sunday and Holidays. Freddie’s Drive-In has the same address; 1100 Roosevelt Avenue, Ext.

Racing through the square in York