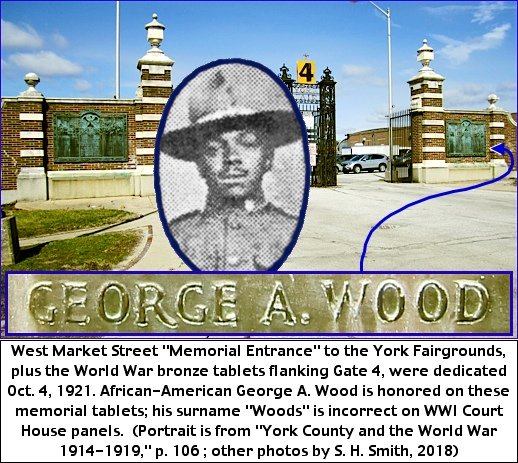 York County African-American veteran George A. Wood was killed in action September 29th 1918 during World War I. Private First-Class Wood is honored on the bronze memorial tablets flanking Gate 4 at the York Fairgrounds. His surname is incorrectly spelled “Woods” among the 197 York Countians honored on the World War I panels, fronting four columns, at the York County Administration Center, located at 28 East Market Street in York, PA.

The portrait of George A. Wood is from page 106 of the book “York County and the World War 1914-1919” by Clifford J. Hall and John P. Lehn; which also used the incorrect surname spelling. Later in this post, I draw upon an article about George on page 107, plus additional resources to chronicle his life and service. Those pages are within the section devoted to the York County patriots who gave their lives in national service during the World War.

Click on this LINK for a yorkblog.com Full View of the two original photos/documents in this post if details are cut off in the cropping of photos/documents, or if they have been removed from the ydr.com site.

The best way to start researching a WWI veteran is via pension details, of which copies of original documents are available on Ancestry.com. The following WWI Veterans Service & Compensation Record, for George A. Wood, is from a 1934 pension application approval for his widow Mrs. Mittie Wood; when she resided in Youngstown, Ohio. 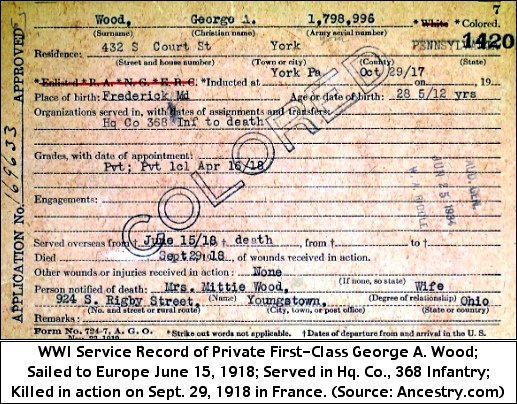 George A. Wood, on this document, was born in Frederick, Maryland, and died September 29, 1918, of wounds received in action in Europe. Further family history research proved this is the record for the subject of this post; who lived most of his adult life in York and is buried in York County. He served overseas from June 15, 1918 until his death. Census, newspaper articles, vital and family history records; available at the York County History Center and on Ancestry.com, provide the early family history of George.

George A. Wood was born during June of 1890; as the son of George A. Wood, Sr. and Anna (Burke) Wood. For the first fifteen years of his life, the family lived in Frederick County, Maryland. By 1905, the family moved to York, PA and resides at 316 S. Howard Alley; with his father working as a machine operator.

In 1910, the U. S. Census records the family continuing to reside at 316 Howard Alley in York, PA. George is 20-years-old, working as a laborer, at an Ice Machine Company; most likely the York Manufacturing Company. His father, and brother James, also work for the same company.

George A. Wood was a Private in the 368th Infantry Regiment and was promoted to Private First-Class on April 16, 1918. Within that regiment, George was in the 41st Machine Gun Battalion.

The 368th Infantry Regiment trained at camps throughout the Northeast and Midwest. After arriving in France, they received additional training under the command of the French Army. Their training was considered complete on August 12, 1918; at which time all African-American regiments of the 92nd Division were moved near the front lines; in the Vosges region.

The 368th Infantry Regiment saw their first action when they were assigned to the French 38th Corps; which had orders to attack the German line in the Binarville area on September 26, 1918. After four days of grueling battles, the French 38th Corps failed to achieve a breakthrough in the German line. It was from wounds received in that battle, George A. Wood lost his life.