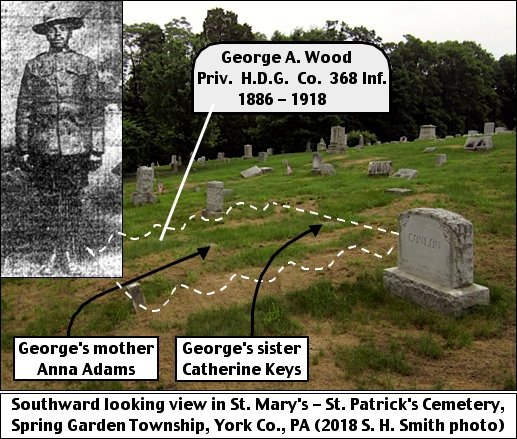 Previous posts about PFC George A. Wood dealt with his WWI service and his funeral. After being killed in action September 29, 1918, the body of George Wood rested in a temporary battleground grave in France. In 1921, the government returned the bodies of the fallen veterans to the States. Newspapers reported Mrs. Anna Adams, arranged for the final burial of her son, PFC George A. Wood, in his hometown on August 6, 1921.

Following services at St. Patrick’s Catholic Church, guarded by comrades who served with Wood, his body was borne on a caisson to the Catholic Cemetery in Violet Hill. The following photo of such a WWI burial procession includes an inset of PFC George A. Wood from page 106 of “York County and the World War,” by Hall and Lehn.

Inscriptions on all the headstones at the Catholic Cemetery in Spring Garden Township were recorded on May 24, 1934, by Alice E. Starner, C. Zaner, H. J. Young, and E. & J. Beard. This was done as part of a project to document all of the cemeteries in York County. Those records are housed at the York County History Center.

Immediately prior to the George Wood record, a headstone for Serena Zinn was recorded. A headstone for John & Anna Nabor was nearby (also before Wood in the list) and a “tin marker” for George Conlon was nearby (after Wood in the list). That “tin marker” was replaced with a headstone when his wife, Mary Conlon, died in 1939. The following 2018 eastward looking Google Earth View of a small section of St. Mary’s – St. Patrick’s Cemetery has those headstones pointed out.

The 1953 headstone for George A. Wood’s mother, Anna Adams, is in the center of the area bounded by the dashed white lines; with the grave of George A. Wood logically located somewhere within that bounded area.

The other headstone in that bounded area is for George A. Wood’s sister Catherine. Obituaries for John S. Keys and Catherine M. Keys have no surviving children listed. Also earlier Census records only list John and Catherine; therefore it is doubtful the Keys had children. Catherine (Wood) Keys is a daughter of George and Anna Wood.

There were burials at St. Patrick’s Cemetery of a child and brother of George A. Wood; prior to George’s burial on August 6, 1921. It is unknown if those, or possibly even the father, George A. Wood, Sr., might be buried on that plot, without grave markers?

Original marriage records, at the York County Government Archives, indicate WWI veteran George A. Wood, where his signature on marriage license matches his signature on military records, was married at St. Patrick’s Rectory in York to Laura V. Baxter on November 24, 1910. They had one child, Mary Elizabeth Wood, who died young on Oct. 16, 1911, and was buried, at St. Patrick’s Cemetery on October 18, 1911; per her Death Certificate.

Separate directory listings, soon thereafter, appear for George & Laura Wood, leading one to suspect they separated (then divorced?) soon after the death of that child. Laura re-married on March 13, 1919 and died August 2, 1967; she is buried with her second husband George T. Barton (they are not buried at St. Patrick’s Cemetery).

There is a WWI Veterans Service & Compensation Record for George A. Wood from a 1934 pension application approval for his widow Mrs. Mittie Wood; when she resided in Youngstown, Ohio. It is still unknown if she was a second wife of George A. Wood.

WWI veteran George A. Wood’s brother, James C. Wood, died October 26, 1914, and was buried, at St. Patrick’s Cemetery on October 28, 1914; per his Death Certificate. George and James are the sons of George A. Wood Sr. and Anna (Burke) Wood. Mrs. G. A. Wood (i.e. Anna) was the informant for that Death Certificate; she gave her maiden name and birthplace as Frederick County, Maryland, and the birthplace of her husband, George A. Wood, Sr., as Virginia. Anna later re-married as Anna Adams; she died December 3, 1953, and was buried, at St. Patrick’s Cemetery.

The Cemetery Manager confirmed PFC George A. Wood is buried in the same group of plots as Anna Adams and the Keys, however indicated anything associated with marking the grave, has to be per a request from one of their descendants.

Mary L. (Todd) Armstrong has many descendants, all the way down to 31 great-great-grandchildren and a great-great-great grandchild; per her obituary. It falls to one of them, if they choose to initiate marking the grave of PFC George A. Wood through the Cemetery Manager.