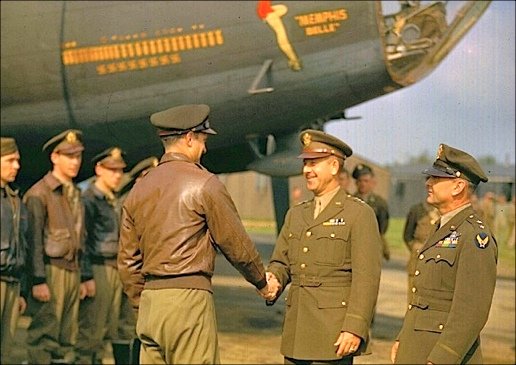 Commanding General of U.S. Army Europe Jacob Devers shakes hand of Captain Bob Morgan, the pilot of the Memphis Belle B-17 bomber on June 13, 1943, at Royal Air Force Station Bassingbourn, England. Eighth Air Force’s commander General Ira Eaker is next to Devers, with the crew of the Memphis Belle behind Morgan. (Photographed during filming of “The Memphis Belle—A Story of a Flying Fortress, Library of Congress)
Posted by Stephen H. SmithMay 22, 2020May 23, 2020 All Posts, Pennsylvania, Various Locations, York County

York’s four-star General Jacob Devers played himself in a World War II movie released in 1944 by Paramount Pictures. “The Memphis Belle—A Story of a Flying Fortress” was made as a morale-building inspiration for the Home Front by showing the everyday courage of the men who manned these bombers.

Commanding General of U.S. Army Europe Jacob Devers shakes hand of Captain Bob Morgan, the pilot of the Memphis Belle B-17 bomber on June 13, 1943, at Royal Air Force Station Bassingbourn, England. Eighth Air Force’s commander General Ira Eaker is next to Devers, with the crew of the Memphis Belle behind Morgan. This was just before the Memphis Belle and crew returned to the States following their 25th bombing mission; where they toured the U.S., promoting war bonds.

Prior to their initial mission, Bob Morgan and some of his crew saw the John Wayne movie Lady for a Night, which featured a riverboat named the Memphis Belle; from which the crew voted to name their plane. The 25 bombs painted on the nose of the Memphis Belle indicate this B-17 participated in 25 bombing missions. It was one of the initial heavy bombers to complete 25 missions during WWII.

During the US Army Air Forces initial months of bombing missions over Europe, bomber crews averaged 8 to 10 missions before being shot down. It was decided that 25 missions, while serving in a heavy bomber of the 8th Army Air Force, would constitute a completed tour of duty.

However many of those completing 25 missions continued to serve; such as Bob Morgan. Following the war bond tour in the States, Morgan commanded the 869th Squadron of the new and larger B-29 Superfortress. On November 24th, 1944, Morgan led the first B-29 bombing raid on Tokyo and first bombing of Japan since General Jimmy Doolittle’s B-25 raid two years earlier. Bob Morgan flew in 26 missions over Japan.

Dick Moore volunteered to assist in tracking down the York Plan movie, which I wrote about last year. In doing so he uncovered several WWII era movies with local connections. General Devers involvement in The Memphis Belle movie is the first of those finds. Dick’s comments follow:

“While searching the IMDb (Internet Movie Database) for actors in the York Plan movie, I came across several films you many want to share on your blog. The Memphis Belle and A Welcome to Britain include Jake Devers. I discovered the Library of Congress provides free viewing of The Memphis Belle, via a YouTube video.”

“The raw 16mm color silent-film footage was edited in Hollywood. The original Memphis Belle crew, during their war bond drive, added to the studio sound track with appropriate comments. It appears Jake Devers’ screen time, near the end of the movie, was severely shortened in favor of showing the King and Queen of England visiting the crew. It is suspected the color still photo of Devers and Morgan shaking hands is from a clip of the 16mm film that ended up not being used in the final movie.”

“Another IMDb listing for Jake Devers is the film A Welcome to Britain. This Army Training Film, presented by the British War Office, was shown to American soldiers upon arriving in Britain, informing them of British ways of life. Jake Devers has a short speaking role near the beginning of the film; in a conversation with Burgess Meredith, who is the principle film actor.”