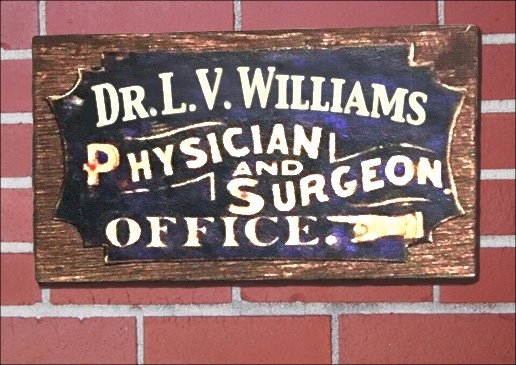 Verna Williams’ grandfather and then her father collected Williams family history for as long as she can remember. Upon the passing of her father, her brother added to the research, using modern resources. After her brother passed away last year, Verna inherited the box of papers and the computer; the source of the Dr. L. V. Williams sign photo; which Verna surmises might have stemmed from a long ago visit by her grandfather.

Verna states she is, “having a blast looking through the collected family history. However the real joy is working with a nephew. He is helping me with the computer and has developed an interest in being the next caretaker of the box.”

Her brother was keeping a list of unresolved family history questions. The question which pointed Verna in my direction: “In 1900 Snyder County, 16-year-old Louis V. Williams is a listed Grandson of 59-year-old Anna Williams, widow of General E. C. Williams. In the next decade, Louis came to be a Medical Doctor in York County. Puzzling possibilities on who are Louis’ parents?” Verna also questioned why Edward C. Williams is referred to as a General in most newspaper clippings, when his headstone lists: “Capt. during Mexican War and Col. of 9th PA Cav. during Civil War.”

Verna appreciated my posts about Dr. Louis V. Williams and especially his famous daughter Lydia Williams Hall. Verna Williams is a retired nurse. The initial query was if I knew the identity of the doctor’s parents. I, also, was puzzled at that same question, because of conflicts I could not resolve at the time of my first post about Dr. Williams.

The only connection to General E. C. Williams, which I previously uncovered, was a marriage article at Louis V. Williams’ hometown area of Chapman Township, Snyder County; appearing in the December 8, 1905 issue of the Snyder County Tribune: “We are in receipt of the announcement of the marriage of Mr. L. V. Williams to Miss Anna, daughter of Rev. and Mrs. W. H. Ketterman, of York, Pa. Mr. Williams is a grandson of the late Gen. E. C. Williams, of Chapman, this county, and is associated with the Pennbrook Times and is well known to many of our readers, having attended Susquehanna University a number of years. We wish our young friend and his wife a long and prosperous wedded life.”

Who is General E. C. Williams?

Quoting the [see next page] article in the July 27, 1861 issue of Harper’s Weekly: “General Edward C. Williams, whose portrait we gave on the preceding page, was born on the 10th of February, 1820, in the city of Philadelphia, where he resided until the year 1838. In the spring of 1838, being then but a youth of 18 years, he removed to the city of Harrisburg, there to commence the journey of life. Upon his arrival he at once found employment in the bookbindery of the Messrs. Canteens. Here he remained for some time. Quiet and industrious in manner, he became extremely useful to his employers.”

“But the quiet of life was not compatible with his disposition. In December, 1846, he left the city of Harrisburg in command of the Cameron Guards, Second Regiment Pennsylvania Volunteers, to join our army, then in Mexico. At the head of his company he took an active part in the capture of Vera Cruz, thence through the different battles, which took place upon the lines of our veteran Commander-in-chief. Being wounded at Chapultepec, in the hottest of the fight, he did not leave his command, but bravely led them to the taking of the castle, upon the top of which, with his own hand, he hoisted the stars and stripes. Again, at the city of Mexico, his hand was the first to grasp the halliards to which was attached the first American flag that floated over the Mexican capital. At the close of the war he returned to the city of Harrisburg, since which time he has filled different offices of trust with credit to himself and his constituents. At the breaking out of the war we find him among the first to offer his sword for the preservation of our Union.”

Harper’s Weekly began publication in New York City during 1857. It had a national distribution and was famous for covering the Civil War through articles and an extensive use of illustrations. The July 27, 1861 issue featured the cover illustration captioned: “Brigadier General Williams — from a photograph [see next page]” The article on the next page is entitled “Gen. Edward C. Williams.” Therefore, as of July 27, 1861, i.e. during the Civil War, Edward C. Williams is a General.

Fifteen years earlier, during the Mexican-American War, Edward C. Williams’ rank was Captain. In a call for volunteers, Williams raised a company in Harrisburg, then known as the Cameron Guards, which signed up December 6, 1846, for the duration of the Mexican War. Per military records, this unit became part of Company G of the 2nd Regiment, Pennsylvania Infantry, commanded by Captain Williams.

Williams was involved in many of the flag raisings, because prior to leaving for the Mexico battleground, he was allowed to borrow a historical American flag, housed in the State Library in Harrisburg, which had connections to the American Revolution. Captain Edward C. Williams served under the command of General Winfield Scott during the series of final battles of the Mexican War. Vera Cruz was taken in March of 1847, after a three-week siege. Throughout the Spring and Summer of 1847, the American Forces fought to capture Mexico City. On September 14, 1847, the American flag was raised over the Mexican capital, which ended the military phase of the war.

Williams returned to Harrisburg in July of 1848. Edward C. Williams became a famous soldier in central Pennsylvania for his actions in the Mexican–American War. He was elected High Sheriff of Dauphin County and was commissioned Brigadier General of the Dauphin County militia. The flag he had borrowed from the State Library was returned to the State Capitol. It is one of the flags carefully preserved in glass cases in the rotunda of the capitol building.

At the outset of the Civil War, Governor Curtin directed Brigadier General Edward C. Williams to organize Camp Curtin in Dauphin County, however he was at that task only a short while, when he was given command of a brigade of Pennsylvania militia at York’s Camp Scott.

A few weeks after the Harper’s Weekly article, extolling Williams’ actions in the Mexican–American War, Brigadier General E. C. Williams was mustered out of service, ending his command of a brigade of militia. He was enrolled in the regular army at the rank of Colonel on August 24, 1861. He was selected to organize and commander the 9th Pennsylvania Cavalry Regiment. Col. Edward C. Williams organized the regiment August 29, 1861, at Camp Cameron near Harrisburg. It was composed of 12 companies recruited from the counties of south-central and southeast Pennsylvania; its officers serving under Col. Williams were: Lt. Col. Thomas C. James, Major Charles A. Appel and Maj. Thomas Jefferson Jordan.

The 9th Pennsylvania Cavalry Regiment trained in Jeffersonville, Indiana, and saw action in Kentucky and Tennessee. Circumstances arose that compelled Colonel Williams to resign his commission; he was discharged from the service October 9, 1862. For the remainder of his life, Edward C. Williams was actively involved in lobbying, at the state and national levels, on behalf of veterans and served on committees recognizing their sacrifices via memorials. “The General” Col. Edward C. Williams passed away February 16, 1900; a life of 80 years and 6 days.

How is Dr. Louis V. Williams the grandson of General E. C. Williams?

The histories written about General Edward C. Williams occasionally provide details about his two marriages, however seldom anything about his descendants. On January 16, 1843, Edward C. Williams was married to Selina Hetzel, daughter of John Hetzel, of Harrisburg; Selina died during May of 1865 in Harrisburg. His second marriage in Chapman, PA, was on June 5, 1873, to Mrs. Anna E. Hetzel of Philadelphia.

I discovered the missing family connections after I expanded the year range of my Newspapers.com search. Where I discovered Agnes Selin Schoch, the President and Publisher of The Selinsgrove Times-Tribune, wrote a series of columns for the newspaper, entitled “Yesteryears.” That column on page 4 of the June 19, 1952, edition contained memories of General Williams. One paragraph provided the details I sought:

“He [General E. C. Williams] was then married to Mrs. A. E. Hetzel, of Philadelphia, whose daughter, Dolly, by a previous marriage, was considered a great beauty. The General loved to show off Dolly and took her with him to not only the State’s capitol but the Nation’s as well, when attending political meetings. She apparently had a very delightful social time of it. Together she and the General attended the Centennial Celebration in Philadelphia. There she met a young Italian attached to the embassy at Washington. His last name was Oliverio. They were married and had two sons, who in years to come were adopted by the General and given the name Williams. They were the late Dr. E. C. Williams, of Port Trevorton, and Dr. Louis Williams, of York. The General also adopted a little girl, who grew up to be Mrs. H. Reinard, of Chapman. It was she who for years on end kept fresh flowers on the old soldier’s grave.”

Returning to the sign heralding the office of Dr. L. V. Williams; which was submitted by Verna Williams. A one story 14-ft x 11-ft addition, at the southeast corner, was added by Dr. Williams after he purchased the Springettsbury Township farmhouse along Mount Zion Road in 1944. The sign would have directed patients to that doctor’s office, during his final years of medical practice. The sign was likely repurposed from his various earlier office locations in York County.

The entrance to the doctor’s office, off of an older porch, was bricked-up when the township remodeled part of the office, as an interior first floor lavatory about twenty years ago. The first floor of the farmhouse continues to be utilized by Springettsbury Township Parks and Recreation Department.