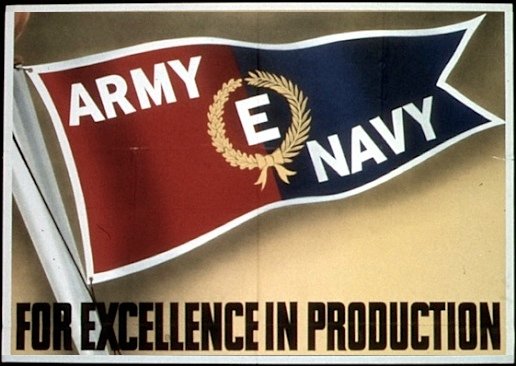 The General Electric Company operated two plants in York during World War II: the large York Wire & Cable Works and a separate smaller facility, established in 1944, to manufacture rocket igniter assemblies. The Wire & Cable Works was granted an Army-Navy “E” Award, for production excellence on July 29, 1943. That plant was located at 463 South Albermarle Street, just south of the Maryland & Pennsylvania Railroad tracks, in the eastern end of York City.

This post will focus on the other General Electric plant; the one which manufactured rocket igniter assemblies. That plant was occupied during May of 1944, via leasing a building at 170 East Boundary Avenue; i.e. located at the southeast corner of McKenzie Street and East Boundary Avenue, in the southern part of York City.

The need for that little known Boundary Avenue plant came about as a direct result of the development of Rocket Launcher M1, a man-portable, recoilless, anti-tank weapon; more commonly known by a nickname, which stuck, the bazooka.

Early in WWII, two Army Ordnance engineers, Lt. Edward Uhl and Capt. Leslie Skinner, were tasked by Dr. Clarence Hickman, with devising some way that a soldier could hurl a four-pound armor-piercing grenade at a target. A rocket-propelled grenade had long since been considered; however shielding the soldier, firing the device, from the frames of the rocket had always been a problem.

Lt. Edward Uhl came up with the solution; put the rocket-propelled grenade in a long tube that would rest on a soldier’s shoulder. The first successful firing of the prototype occurred in May 1942. The tube was just long enough so that the rocket would finish its 1/50th-of-a second burn by the time it emerged from the front of the tube. General Electric was given 30 days to deliver the initial 5000 launchers. By the end of WWII, 440,000 bazookas had reached the field.

A troublesome battery powered ignition system was initially utilized for firing the rockets from the bazooka. On the battlefield, the versatility of the bazooka caught the attention of General Eisenhower. The tank busting capabilities of the bazooka far exceeding expectations, and different warheads made the bazooka an excellent bunker buster and a wide range of other uses.

Fixing the battery problem was given high priority. General Electric got rid of the battery entirely, by developing a magneto rocket igniter mechanism within the bazooka grip.

The wire used in the mechanism within the NOS M9A1 Bazooka Grip was produced at the York Wire & Cable Works in the east end of York; however the military wanted the rocket igniter assemblies produced at a separate facility. The local General Electric plant was able to lease a former Penn Cigar Company building on the southeast corner of McKenzie Street and East Boundary Avenue.

Production at the Boundary Avenue plant was fully ramped up by July 1944, such that starting in August 1944, all new bazookas included the NOS M9A1 Bazooka Grip with magneto rocket igniter. Demand for bazookas continued to climb, such that General Electric also leased the adjacent former H. W. Heffener Cigar Box Factory. The relative location of the buildings in the Boundary Avenue plant is shown in the annotated October 27, 1955 aerial photo.

The Boundary Avenue plant next became a sewing factory. Cathy Suit Company, subsidiary of Joselli Suits, Inc. opened in July of 1950. Today the former plant site is paved over, as the large parking lot east of Crispus Attucks Charter School.

Appell Performing Arts Center’s Capitol Theatre, in York, on Tuesday December 10, 2019, 7:00 PM, will be the site of York Daily Record’s 5th annual history night, York History Storytellers; featuring presentations about “Pivotal Moments in York County History.” I’ll be one of the participants that evening; with my topic The York Plan. The fee goes to cost of renting the Capitol Theatre; however PARKING is FREE in the parking garage. Reservations can be made at this LINK.