A month ago, I wrote about Remembering the Early Years of the York Mall. Thanks to my readers for providing additional memories. Alicia Helfrich submitted the photo of her Funderland Button and these comments:

I wanted to add to your article on the York Mall. This was the place to hang out on the weekends before or after the movies, and before and after going roller skating. There were a few places skipped in your article that were a huge part of a teenager’s night hanging out at the mall.

Funderland! It was the arcade that you could find all your friends. I happen to be the queen of the asteroids game. My name always appeared at the top. The other place you could find your friends at was Lucas Pizza, found at the other end of the mall near the So-Fro Fabric Store and J.C. Penney. We also liked to walk into the Hickory Farms store found in the corner near the stairway. We enjoyed getting the free samples of cheeses and crackers. I have many great memories of the York Mall as others do too.

I remember that the Trans-Lux Movie Theater end of the mall eventually got tagged with the Arcade Area label, since that is where Funderland was located. I checked into why Funderland was not in the 1971 list of stores from my previous post.

This illustration is from the records of The United States Patent and Trademark Office. The Word Mark FUNDERLAND included the shown Design plus Funderland words. The submission indicated this mark was first used in commerce on May 10, 1973. The Funderland trademark was issued to Leisure Recreation Services, Inc. of Camp Hill, PA. The York Directories indicate that Funderland opened in the York Mall between 1973 and 1974; therefore in agreement with the trademark registration. Likewise the York Directories indicated that Lucas Pizza opened in the York Mall between 1972 and 1973. 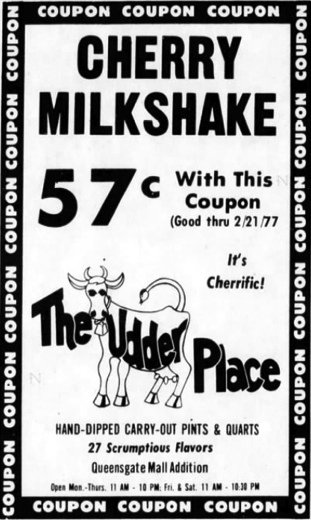 I received more Funderland comments from Kathy Miller, but with a twist: “What happened to Funderland on you list of York Mall businesses? We’d always hang out there, especially before or after a movie. If Funderland got crowded at the York Mall, someone in our crowd would always suggest ‘Let’s go to the udder place;’ our code for the other Funderland.”

“Did you know that there was a Funderland in the Queensgate Shopping Center? It was one of the stores located at the site of today’s Frank Theaters. There was an ice cream place near that Funderland, called The Udder Place; a nice play on words.” The Udder Place ad/coupon comes from the February 16, 1977, issue of the York Daily Record.

The following coupon for a Free Game at the Funderland in Queensgate, could also be redeemed at the York Mall Funderland. The ad/coupon comes from the November 24, 1976, issue of the York Daily Record. 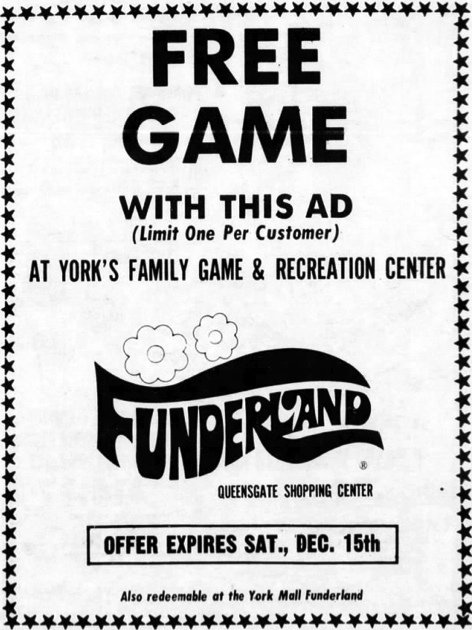