This is a copy of part of an Internet page at www.ehow.com; it indicates S. Morgan Smith’s company was founded in 1871.  This can be classified as an occurrence where people overlooked the fact that the first product that S. M. Smith manufactured was his patented washing machine; they simply recalled he began his manufacturing career in the early 1870s, with which they inferred an earlier year when he established his Company.  The picture utilized is incorrect; the turbine water wheels, that S. Morgan Smith produced, were not as shown. 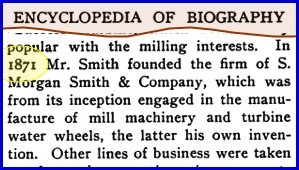 However the utilization of the year 1871 is not entirely Danielle’s error.  The year 1871 has showed up in references for well over 100-years.  This clipping is from page 122 in Volume 1 of the Encyclopedia of Pennsylvania Biography, published in 1914 by John W. Jordan, LL.D.; Librarian of the Historical Society of Pennsylvania.  Whenever I see an obvious error in early publications, I like to see how far back I can trace the error.  Many times a guess in an earlier publication, such as a county history, turns into a precise statement of face in biographical sketches such as this one.

Following this list of related posts, continue reading for S. Morgan Smith Company sources and exploration of the early years that are floating around for its establishment.

A Biography of S. Morgan Smith appears on the following part of an Internet page at www.pacivilwar.com; it indicates S. Morgan Smith began his work with water-wheels in 1871.

S. M. Smith was in the manufacturing business by himself in 1871, however he was making washing machines instead of water-wheels.  Sources are: his 1870 washing machine patent (a washing machine with that patent and marked “S. M. Smith, York, PA” is in the Agricultural & Industrial Museum), York, PA directories listing him as a patentee of the Success Washing Machine and ads in York, PA newspapers where he asks people to address Success Washing Machine orders to S. M. Smith, York, PA.  I have found no sources to substantiate S. M. Smith working with turbine water wheels until he was exposed to them through the establishment of the York Manufacturing Company.

Even though S. M. Smith established his own company to produce turbine water wheels in the 1876/1877 timeframe, he remained President of the York Manufacturing Company through June 1878 and did not leave the company entirely until 1880.  The few times I’ve seen 1874 noted as the date S. Morgan Smith was established is due to people incorrectly combining York Manufacturing Company and S. Morgan Smith Company.

Sources of information on S. M. Smith’s involvement with the York Manufacturing Company is within York Company archives; these were all shipped to Johnson Controls headquarters in Milwaukee after the 2005 acquisition.  However The Legend of York International, by Jeff Rodengen includes referenced information from these York International archives.

I believe this listing refers to holdings at the York County Heritage Trust.  They have 1873-1877 and 1878-1881 Ledgers of S. M. Smith.  I’ve read that these ledgers contain information on all of S. M. Smith’s business concerns, and are not restricted to any one company; although I do need to check these ledgers out personally.

Another significant source might be early S. Morgan Smith company archives, which were donated to the Smithsonian following the Allis-Chalmers acquisition.  I had first seen this source while putting together the York Manufacturing Company talk.

This is the information on that collection from a Smithsonian Internet page.  This is a sizable collection: 23 cu. ft.; 88 boxes, covering the first 24 years after the company erected their first factory in 1890; thus covering the last 14 years of S. Morgan Smith’s life and the time of tremendous growth in his company.