The Schultz House is one of the oldest houses in York County.  It is located south of Stony Brook and west of Locust Grove Road in Springettsbury Township; near the site of the Revolutionary War prisoner of war Camp Security.  I learned about Henry Ford’s interest in this house during my involvement with the archeological dig around the house in 2009.

Historic York has a description of the Schultz House on their web site.  They note Henry Ford’s interest in purchasing this house in this paragraph:

A newspaper article in the archives of Historic York, believed to be from the 1920s but not sourced, tells of Henry Ford’s interest in purchasing the Schultz House and relocating it to the Henry Ford Museum and Greenfield Village in Detroit, where he created a historic experience from more than 80 buildings and structures that he purchased and relocated.

While researching another Henry Ford connection to York County, by sheer luck, I discovered the date and source of that newspaper article.  I’m also pretty sure I know where Henry Ford intended to place the Schultz House within Greenfield Village.

If it is the same newspaper article in the archives of Historic York, the source is The Reading Eagle issue of Friday January 17, 1930.  Emanuel Landis, the owner of the house at that time, owned the Schultz (Shultz) House from 1922 to 1944.  The newspaper header, article headline and article in five sections follow: 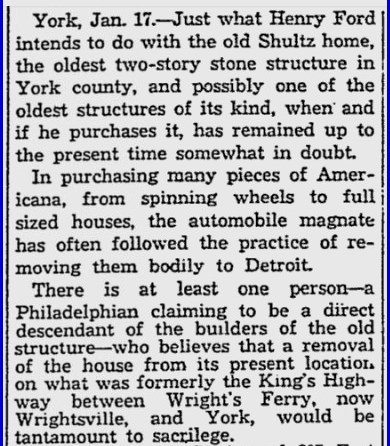 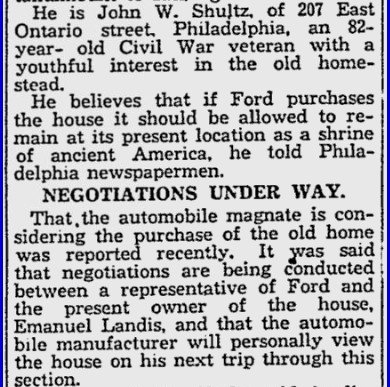 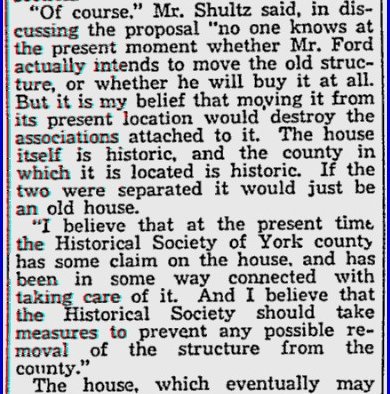 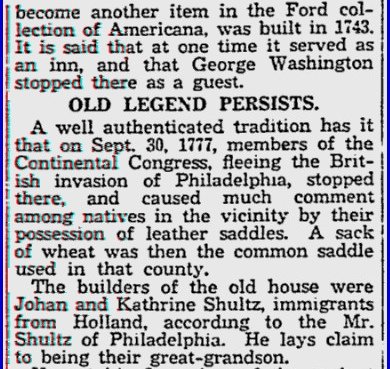 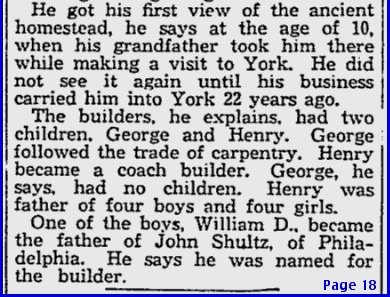 Why Ford’s first choice?  Probably so that Ford could tout, as per the newspaper article, “A well authenticated tradition has it that on Sept. 30, 1777, members of the Continental Congress, fleeing the British invasion of Philadelphia, stopped there,” also “that George Washington stopped there as a guest.”

The building now standing as the Susquehanna Plantation within Greenfield Village is an early Maryland farmhouse Henry Ford purchased in March of 1942 and moved to that location.  Historical researchers, at the time, concluded that farmhouse on the bluffs of the Patuxent River in Maryland was constructed around 1650.  However historical details came to light in the 1980s such that now this Maryland farmhouse conclusively dates instead to the 1830s.