Tammy Roth wrote, “My parents moved from Rhode Island to York County at the start of the Summer of 1975; not wanting to move my younger sibling and me during the school year. Arthur Treacher’s Fish & Chips restaurant opened within days after our move. It became my dad’s favorite. It is where I got my first job, and it is where I first met my husband. I had never heard many facts about the hamburger joint formerly at that location. Thanks for filling in the details with your story about Huntleys Hamburgers.”

Directories at the York County History Center note Arthur Treacher’s Fish & Chips operated at 190 Memory Lane from 1975 until 1981/82. As Tammy’s e-mail continues, she provides her thoughts why it closed. “About 1980, we started to get complaints the taste of the fish had changed. There was a continual drop in the number of customers. I quit before they shut down. I heard that shortly after Mrs. Paul’s Seafood bought Arthur Treacher’s Fish & Chips in November of 1979, the fish type was switched; instead of Icelandic Cod,  Mrs. Paul’s used Pollack, an oilier fish. I still remember one customer; he always ordered three Krunch Pups and a slice of Lemon Luv pie. I wonder who remembers Fish & Chips on Memory Lane.”

Ad showcasing the other offerings at Arthur Treacher’s Fish & Chips

The Krunch Pup was a batter-fried hot dog and no, I was not the customer that ordered three at a time. Arthur Treacher’s Fish & Chips also served batter-fried chicken. I did not eat there much, however I do remember the Lemon Luv pie as being very tasty. The following ad appeared in the September 22, 1976, issue of the York Daily Record. 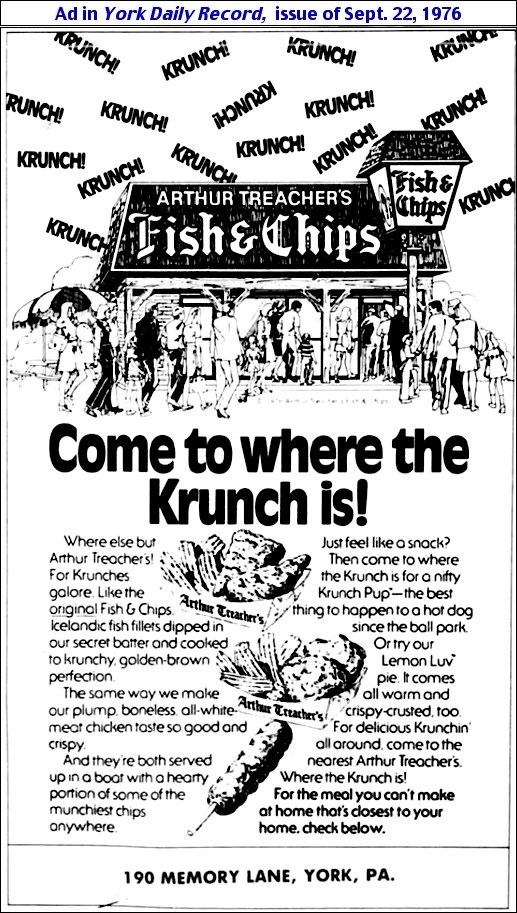 The 190 Memory Lane lot began as an empty piece of ground and eventually contained three eating establishments. From 1966 until 1971 it was Huntleys Hamburgers. From 1975 until 1981/82 it was Arthur Treacher’s Fish & Chips. Beginning in 1984, and presently still there, it is Kentucky Fried Chicken.

Links to related posts in the area: