While the Continental Congress met in the York County Court House, the ‘Articles of Confederation and Perpetual Union’ were adopted on November 15, 1777. The articles turned the thirteen separate colonies into a single nation. The articles named the new nation ‘The United States of America.’

I’ve always wondered when was the earliest that York promoted the first capital of the United States claim. The 1912 plate is the earliest promotional item I’ve seen; here I’ve zoomed in on the central illustration on the plate. Click on this LINK for a Full View of the illustrations in this post; since the ydr.com site will occasionally cut off important details in the cropping of illustrations. Have any of my readers seen any related ‘First Capital’ promotions prior to 1912? 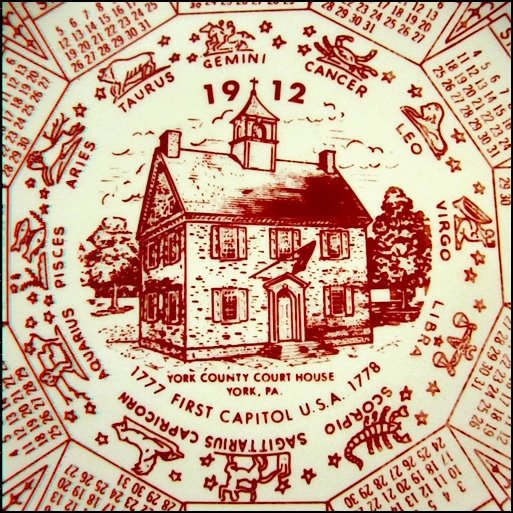 ‘Is York the First Capital of the United States?’ is one of the topics during ‘An Evening To Unravel York County History.’ This free evening, open to the public, is set for 7 p.m., Wednesday, Dec. 9, 2015, at Wyndridge Farm, 885 Pleasant Avenue, near Dallastown. Check Jim McClure’s post ‘Can you stump these 5 York County historians?’ for additional details.

The little known tale of Mahlon Haines and the Lancaster Heiress