The firehouse of the Royal Fire Company, at 757 West Market Street in York, PA, was dedicated on October 29, 1904. York architects Hamme & Leber were the designers of the Royal Firehouse, as they also designed the Meadowbrook Mansion in 1901.

The principals in the firm of Hamme & Leber received much of their earliest mentoring in the offices of master architect John A. Dempwolf in York.

John B. Hamme began his employment with Dempwolf at the age of 19. Dempwolf must have been a good teacher, since at the age of 24, Hamme was allowed to enter the architectural courses at Cornell University at the junior level. He graduated with the class of 1888 and was offered a position as instructor in architecture at Cornell. John preferred active practice and returned to Dempwolf for a short period, prior to forming a partnership with John Parkinson in 1890. That partnership was located in Seattle, Washington where the firm practiced throughout the 1890s. Hamme returned for another short period with J. A. Dempwolf prior to forming the partnership in York with Edward Leber during March of 1900.

Edward Leber was 9-years younger than John Hamme. Leber proved to have a talent for drawing while attending the York County Academy. Edward began his employment with J. A. Dempwolf also at a young age. After a few years working with Dempwolf, Edward Leber attended The Massachusetts Institute of Technology at get his degree in architecture, before returning to York to become the junior member of the architectural firm of Hamme & Leber.

More about the Royal Firehouse plus Hamme & Leber 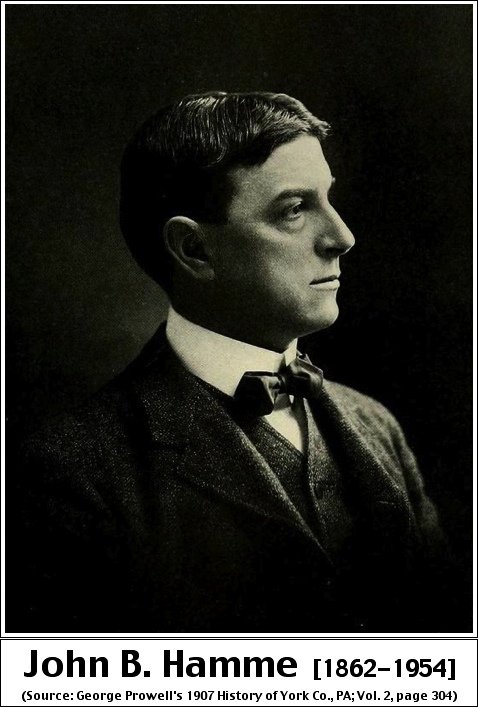 John B. Hamme was born in Manchester Township on April 8, 1862. Edward Leber was born in the City of York on March 23, 1871. Their firm, Hamme & Leber is mentioned as extensively studying many firehouses to achieve the Royal Firehouse design universally praised. The trade publication, Municipal Journal and Engineer has a two-page article on the Royal Firehouse in their January 1905 issue. Quoting two paragraphs from that article:

The instructions to the architects of the proposed building were to design a house that should embody the best and most approved features in Fire Engine Houses, as demonstrated by the experience of other cities. With this end in view Messrs. Hamme & Leber, the architects, investigated the plans and practical working qualities of houses in the larger cities with the result that the Royal’s is one of the most perfect in arrangement and construction, as well as one of the most beautiful, in the country.

The building is “L” shaped, with a street frontage of 43 feet, and a depth of 106 feet, the width of the wing being 69 feet. The materials used in construction are red Pompeian brick and Hummelstown brownstone laid in brown mortar, with slate roof and copper gutters, valleys and downspouts. The main building is two stories in height, with equal three stories in the wing, and there is a tower 100 feet high, with hanging space for drying 2,500 feet of hose at one time.

Edward Leber died of a heart attack on October 15, 1933; while vacationing in Barre, Vermont. John B. Hamme did not fully retire until 1945, marking 64-years since his initial employment with John A. Dempwolf. John Hamme passed away on October 19, 1954.

J. Alfred Hamme, John Hamme’s only child and partner, continued the Hamme architectural firm as a sole proprietorship until it was reorganized in 1963 as a partnership. The firm continues to operate today as Hamme Associates in York.

Coming full circle. One of Hamme & Leber’s first commissions was in 1901, the Meadowbrook Mansion in Springettsbury Township. Over 100-years later and less than one-half mile from the Mansion, Hamme Associates designed the Springettsbury Township Park Ampitheater; utilized twice a week every summer for the Sounds of Summer concerts.