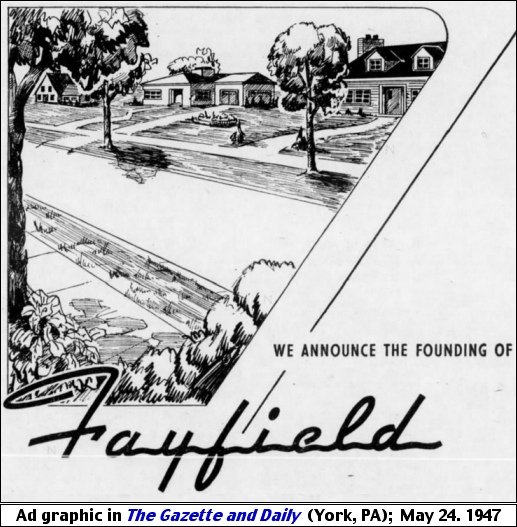 Fayfield developed in Springettsbury on site of first York Airport

Fayfield was developed in Springettsbury Township on the site of the first commercial airport in York County. In 1930 the York Airport was located along Haines Road, where scheduled passenger service provided flights to Pittsburgh, Philadelphia or New York.

The first York Airport operated from 1930 to 1937 on turf landing fields adjacent to the west side of Haines Road; then known as Airport Road. At that time, if one traveled south on Haines Road and looked off to the right, between present 7th and 9th Avenues, one would see the pictured airport buildings.

The pictured airport buildings are from a photograph of an intricate scale model of the airport, constructed by Paul Schiding, Allen Bond and Morris Hendrickson between 1996 and 2003. It is displayed at the Agricultural and Industrial Museum of the York County History Center.

In the extreme lower right is part of the original airplane hanger on the property in early 1930; built by the York Flying Service, Inc. After The York Chamber of Commerce organized York Airport, Inc., several months later, they hired Pittsburgh Airways Corporation as airport operators; to bring scheduled passenger flights to York. A much larger Airplane Hangar was constructed; shown at the top of the photo. The hangar featured a 120-feet wide door on the west side and was 80-feet deep.

Between the hangars a new Airport Office building was constructed. The building contained ticket and operations offices of the York Airport and Pittsburgh Airways; plus a passenger waiting area and a restaurant. The core of the airport office building still stands as part of the residence at 710 Haines Road; on the southwest corner of Haines Road and 7th Avenue.

Scheduled passenger service commenced at the York Airport on October 15, 1930 and the official dedication of the facilities took place October 25-26, 1930. A flight to Philadelphia cost $8.00. A flight to Pittsburgh cost $16.20 and a flight to New York cost $14.40. The airport suffered financial difficulties and in July 1937 a plan showing proposed development of real estate belonging to the York Airport Company, Inc. was recorded.

The initial plan provided for 50 lots along Haines Road; plus showed a possible street layout for the rest of the 157-acre airport property. An auction of the “50 Choice Homesites, Fronting on Haines Road at the York Airport” was held July 24, 1937; per the following ad in The Gazette and Daily.

Most of the lots along Haines Road were purchased on speculation; with only a few being built upon until the Planning Commission approval of the full Fayfield Subdivision in 1947; under the management of the real estate development firm of Morgan, Zeigler and Philips, Inc.; with York offices at 114 East Market Street.

Before advanced planning for a four lane expressway (I-83) curbed development, the lots in Fayfield originally extended the whole way west to the township line; i.e. 7th and 9th Avenues extended west to Mill Creek. And there were plans for 7th Avenue to bridge Mill Creek and connect with 7th Avenue in Spring Garden Township.

The founding of Fayfield was announced in a May 24, 1947 ad within The Gazette and Daily. Speculation on the name Fayfield, favors Fay as the wife, daughter, or mother of one of the developers.

The following 1949 Birds-Eye Aerial Photo by The Gazette and Daily gives an indication of the progress of building in the Fayfield Development. As of April 9, 1949, it was reported 173 of 415 building lots were sold, and 34 homes were built. I’ve annotated the street names and faintly marked (light brown dots) the field of view of this birds-eye aerial on the previous 1938 Aerial Photo.

Zooming in on the upper right of the 1949 photo, shows the former Airport Office building being utilized as a residence; with address at 710 Haines Road and located on southwest corner of Haines Road and 7th Avenue.

A present view of the residence at 710 Haines Road is shown in the following photo. Seeing the window alignment in the Haines Road side of the Model, constructed by Paul Schiding, Allen Bond and Morris Hendrickson, makes it easier to recognize the original Airport building within the residence. I now realize all the photos of the Airport Office building, I’ve ever seen, appear to be of the side facing the airport runway.

The building boom hit Fayfield big in the early 1950s. By 1955 the majority of the lots were built upon, except for those bordering the still being planned four-lane expressway (I-83); which would open in 1959. There was such a strong demand for more building lots, such that Mahlon Haines sold, for development, his 205-acre Haines Acres Farm in 1955, on the neighboring east side of Haines Road.

The next post in a series looking at the twelve township parks in Springettsbury Township will feature Fayfield Park. It will certainly include the York Airport heritage of the property.