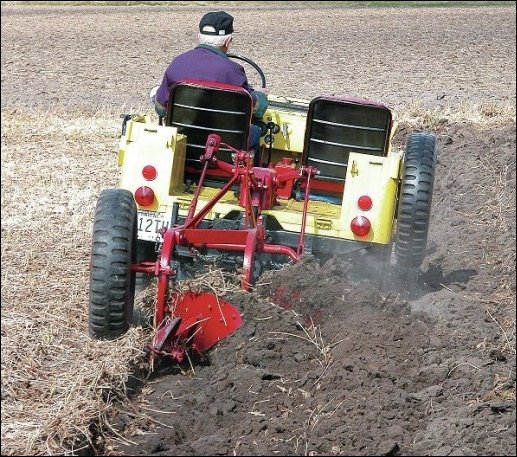 Dick Myers inquired about a Jeep tractor used by an uncle during his truck farming days near Jacobus. Dick’s query follows:

“I saw your Jeep articles and wondered if you ever came across Jeeps used as farm tractors. Fresh out of the army, my uncle Lew bought a small farm near Jacobus where I grew up. Not long after starting school, I was allowed to walk to his farm. My uncle rigged a Jeep to plow the fields. I brag to friends uncle Lew invented the Jeep tractor. I realize Lew was not alone when a friend sent me this photo. The differences: Lew would never paint his Jeep yellow and Lew always used the spare tire on the plow. Lew had a set route through York neighborhoods as he peddled his produce in the back of that Jeep. He was a truck farmer, or a better term, a Jeep farmer. How widespread were these plow attachments on Jeep tractors?”

In searching farming magazines from the early 1950s, the farm Jeep, with plow attachment, was widely advertised. I liked the following 1953 Farm Journal ad because it shows the spare tire on the plow; just as Lew used it. 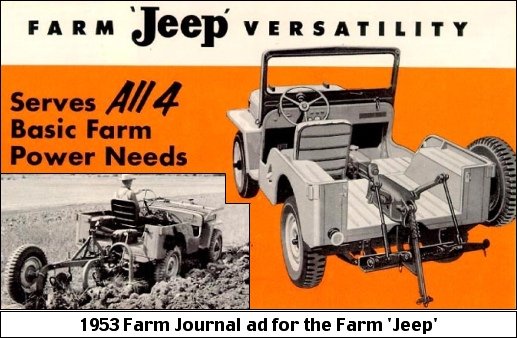 The farm Jeep shows up in York newspaper ads as early as 1947. W. F. Grove Auto Company was the York area dealer. W. F. Grove was headquartered at 239-245 East Philadelphia Street in York, although he had distributors around York County. In 1947, those distributors were Fawn Grove Service Station, Cooper’s Garage in Hanover, Sweeney’s Motors in Stewartstown, and Quaker Race Garage in Wellsville.

The W. F. Grove building in York, at 239-245 East Philadelphia Street, still stands; most recently housing Geo’s Auto Repairs. The W. F. Grove Auto Company ad, for the Jeep as a farm vehicle, appearing in the November 15, 1947 issue of The Gazette and Daily, follows:

Links to related Jeep posts include: