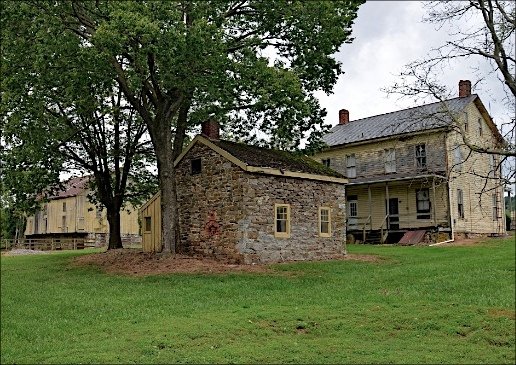 Early Family Cemetery at a Construction Site near Emigsville

The precise location of an early Knab /Knaub /Hake family cemetery was sought due to construction work commencing in the area around a former stone quarry near Emigsville. The cemetery is one of three sites, in that vicinity, listed on Manchester Township Historical Society’s Historic Site Register. The cemetery is listed via MTHS ID: 212.

Mike Spyker is providing photo documentation for the Manchester Township Historical Society. He took the backyard photo of the 1860 property owned by J. Emig, MTHS ID: 186. It is understood those structures will also eventually be demolished.

I was successful in pinpointing the location of the Early Family Cemetery, MTHS ID: 212, utilizing the collections of the York County History Center. The results are presented in this post.

The 2020 Google 3D Aerial Views are used to illustrate the proximity of the three historic sites, in the vicinity of Busser Road and Mundis Race Road, in the eastern area of Manchester Township.

My first stop at the York County History Center was the Lila Fourhman-Shaull ADC Map Book with cemetery locations; penciled in by her. Lila was the foremost graveyard authority in York County. She did the tough site searches; on her own time. Lila visited all but a handful of the hundreds of cemeteries and, the often hidden, family graveyards throughout York County; in order to pinpoint their precise location and provide updated details.

To my dismay, someone had cut out a page in this valued resource; not only that, it was the page with the location details I sought. I learned when this theft was discovered some time ago; a digital backup of the remaining pages in this book was made. The missing page encompassed parts of Conewago Township, Manchester Township and East Manchester Township. For those who obtained copies or took digital photos of back-to-back pages 14 & 15, in order to reconstitute the stolen page, please consider providing copies of those sections of this ADC Map Book, in which cemetery locations are penciled in.

Within the results from the 1930s Cemeteries Project by the Historical Society of York County; Volume V, page 129; records the results of the October 10, 1933, visit by Elizabeth Beard and A. E. Starner to record the gravestone details at the “Knab (Knaub) Burial Ground, on old Emig farm, Manchester Township, York County, Pennsylvania.” They noted “only 3 stones remaining in this plot; several broken in small pieces; also several common fieldstones without markings.” The three gravestones details were recorded as:

A further search at the York County History Center turned up a short paper entitled “Three Grave Stones near Emigsville, PA.” by Luther A. Gotwald, Jr. in 1964. This turned out to be the sought after cemetery. On August 24, 1964, Luther noted inscriptions on three gravestones at the location recorded via his following map. All one can say for certain, is the cemetery is within 20-feet of the Oak Tree; since Luther notes “20 ft East of Oak Tree,” however draws the location west of the Oak Tree. Based upon the road distances provided, the road in the Emigsville Industrial Park is Busser Road.

The following is Luther Gotwald’s sketch of the information on the gravestone of the earliest known burial. This corresponds to the 1933 details: “Knab, Elizabeth; born Jan. 10, 1790 – died July 31, 1792.” This is the most complete gravestone, the others had larger likely broken off pieces.

Historic Aerial Photos of the area, for 1937, 1971 and 1993, are used to show the progression of the surroundings of the Oak Tree near the cemetery. In 1937, no fence-line trees are present, expect for the Oak Tree, at west end of lane from the ID: 185 farm buildings.

The eastern end of Busser Road in Manchester Township is shown via the following 2020 Google 3D Aerial View. It shows location of MTHS ID: 212 (Early Family Cemetery); per location identified by Luther A. Gotwald, Jr. in 1964. When I visited the site on September 4, 2020, a roadway was being cut from the Industrial Park into the neighboring, former quarry, property.

In walking around the cluster of multiple Oak Trees, no upright gravestones were observed in the undergrowth. During wintertime, without the foliage, might offer a better opportunity. It is common for the less substantial gravestones to fall over in these early family cemeteries and naturally get covered with years of falling leaves; if that is the case, lightly probing the ground is often successful to uncover and right gravestones.