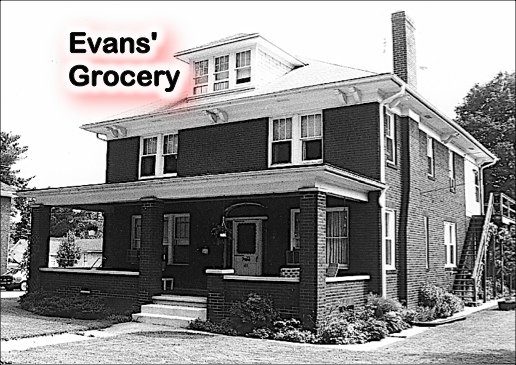 Before big-box chain grocery stores, a scattering of community grocery stores served the residents of Springettsbury Township. One such store, Evans’ Grocery, operated in the building at 45 North Findlay Street in the East York neighborhood from 1930 until 1965.

Evans’ Grocery Store was among over 200 early businesses, which existed in Springettsbury Township prior to 1940. The July 2022 History Night event explored 70 of those businesses; with 15 covered in-depth and the remainder, simply noting the owner, type of business and where they were located.

The YouTube video of the “Early Businesses in Springettsbury” presentation at History Night on July 13, 2022, can be accessed through this link.

Following the event, a gentleman noted he worked in Evans’ Grocery. He shared some of his memories; while also posing questions, which prompted additional research presented herein.

“There is an omission in the East York Historic District application for National Register status. The application includes, ‘there were no stores of any kind in East York.’ In reality, John H. Longstreet frequently wooed potential operators to establish a centrally located grocery store within East York. The favorite of Mr. Longstreet was Mr. Evans. He had prior store ownership experience, believed to be in Reading.”

“Mr. Evans did narrow his store site selection to either Elmwood or East York at the time Mr. Longstreet passed. A few years later, East York was selected. Evans Grocery store was located at the southeast corner of Philadelphia and Findley Streets. It opened about 1933 and was there into the 60s. Besides parking along the streets, off-street parking was available. Mr. Evans was a thrifty storekeeper.”

I used that note as my source for the brief comments about Evans’ Grocery during History Night. Utilization of Newspapers.com allowed further pinpointing the opening of Evans Grocery as January of 1930:

Yorktowne Service Stores was an organization of many community stores throughout York County that purchased in bulk. P. A. and S. Small Company conducted the other similar organization within York County.

Directory listings for 1925 through 1929 have John H. Evans living at 1427 3rd Avenue in Elmwood, Spring Garden Township. That is one-half of a duplex. During those years his occupation is shipping clerk; possibly for P. A. and S. Small Company or Yorktowne Service Stores.

The grocery store was built on that large lot, with the porch entrance facing Findlay Street. John Evans also purchased two additional adjoining lots to the south side of the large corner lot; which allowed off-street parking next to the store.

For 36 years, from 1930 until John Evans’ death in 1965, Evans’ Grocery operated at 45 North Findlay Street in East York. Vertie Evans, his wife, previously died in 1954. Their daughter Dorothy Brillhart was involved in the operation of the store in later years.

The existence of several chain grocery stores in the nearby York County Shopping Center since the mid-1950s, considerably cut into the business of Evans’ Grocery store in later years. Following the death of John Evans, a two-day public sale of his grocery store and estate took place during December 11th and 13th, 1965.

Thomas J. Malloy, and his wife Adele, purchased the store on the large corner lot, at 45 North Findlay Street, on July 13, 1966. It became their long-term residence. In addition, Adele Malloy operated a business, called Findlay Fabrics Corner, on part of the first floor for a few years after they moved in.